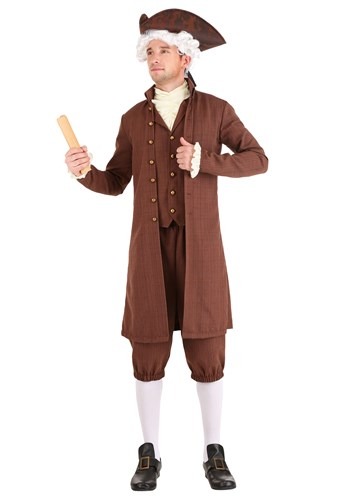 Poor John Adams! His presidency came after George Washington’s, and it was pretty hard to compete with the very first president of the United States. But John Adams is actually pretty cool in his own right. This Founding Father wasn’t only the first vice president and second president of a fledgling country. He also helped write the Declaration of Independence, hammer out a treaty with Great Britain to end the Revolutionary War and was the first president to live in the White House. (Take that, George Washington!) Oh, and his son ended up becoming president, too!

For your next U.S.-president-themed costume party, don’t go as some cliché like Washington or Theodore Roosevelt (and definitely not Abe Lincoln, since there are bound to be at least three other people doing the same thing!). Instead, show off your love of history by dressing up like ol’ John Adams, a truly underrated American president.

Look every inch like a perfect president with this exclusive Men’s John Adams Costume. The costume comes with a jacket and an attached vest, pants, a hat and a cravat. Both the jacket and the pants are 100 percent polyester. The jacket has vest panels sewn into the side and shoulder seams of the jacket, and the panels fasten at the center front with antique-brass-tone metal buttons. The cravat has a hook-and-hoop fastener at the back for easy wear, while the pants have an elastic waistband and cuffs to ensure you’ll always be comfortable. The faux suede tricorn hat has wire along the brim edge to keep its shape and always keep you looking fashionable!

You may have to spend the night explaining who you are to your fellow partygoers, but that will just give you extra chances to tell everyone how amazing John Adams really was. We think that’s a win-win!