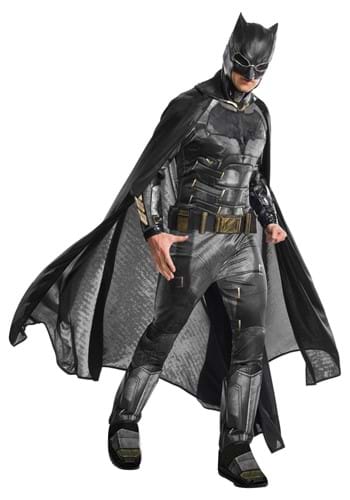 The City Needs You

Perched on a rooftop above Gotham City, a lone figure waits. Soon, a beacon will appear in the sky - a giant bat, calling him to action. Someone is in trouble. The city will need saving once again. Who better than a brooding, gritty hero to save a dark and gritty metropolis?

Defend Gotham and earn a dark yet glorious legend in this officially licensed Grand Heritage Tactical Batman Costume for Men! The polyester and polyurethane foam jumpsuit and attached boot tops are designed to look just like the superhero's classic armor, right down to the molded vinyl bat symbol on the chest. A dark cape billows impressively whether you're jumping into the Batmobile or standing in front of a fan at home to make yourself feel awesome. The hood/mask combo has eyeholes so that you can see where Bane went and chase him down. Two impressive gauntlets complete the suit. Dress up as your favorite superhero for your next party or just be like Ben Wyatt on Parks and Recreation and just wear it around the house!

Like most of us, the Dark Night wears many masks. When he's on duty, he is a silent and dangerous force to be reckoned with. Even the Joker thinks twice about tangling with him. When he's off-duty, though, he shows a different side. That side loves to tinker with bat-themed gadgets, especially useless ones like a bat-shaped boomerang that looks cool but would probably be pretty useless in actual combat. He can also be found chatting it up with Superman over a cup of coffee and arguing over whose hero resume is more impressive. The answer? Superman may have laser eyes and super strength, but Batman is BATMAN.