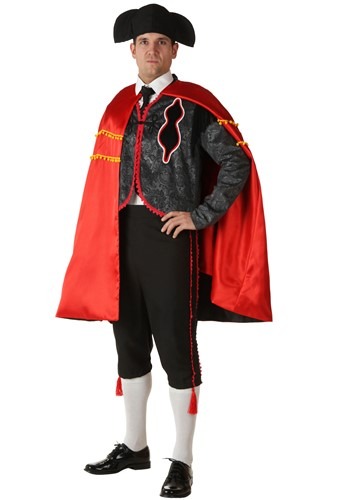 Whenever life gets tough, do you grab the bull by the horns? Or, do you taunt the bull like a matador until it charges at you, and then leap the side at the last second? If you live on the edge and prefer the second style, then our exclusive Matador Costume is the perfect look for you!

While you're under no obligation to fight any bulls when you're sporting this daring costume (in fact we ask that you don't) but you'll look like you're ready to. The finely detailed brocade jacket looks bold and fierce with the included red satin cape over it, and the tasseled pants and knee socks add to this authentic look. Put on the black hat to complete this festive ensemble that's Made by Us and you'll look ready to face any problem, even a raging bull! (metaphorically, of course)

The bullfight is really a metaphor, of course, for how people deal with life's challenges. We don't expect anyone who's going through a tough time to actually go out, find a bull, and then either grab its horns or wave a red cape at it until it charges at them. Wouldn't those both be terrible options for self-care? We don't think our local ER would appreciate that at all. But, if you could solve problems by shouting "Toro!" at a bull, you would definitely want to be properly dressed for the task. They say, dressing the part is the most important part of the task, anyhow.

So dress in this costume when you're getting ready to confront any metaphorical bulls/ everyday issues (especially if it's just something rather mundane, like having to write a report or pay a phone bill). Facing your commute during rush hour while wearing this look will be much more interesting for everyone who might glance in your car!