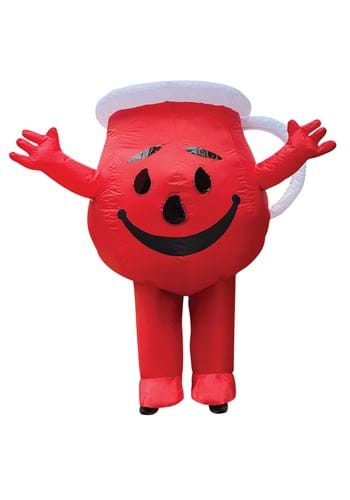 Caution: Item is Not Wall Proof

We've often wondered how the Kool-Aid Man breaks through whole walls in people's homes. He's a gallon of refreshing, ice-cold beverage who looks like he's made of glass. And yet, he's able to step through the lathe, plastic, and wiring of a wall like it's nothing. And then he's always received cheers like he didn't just cause hundreds of dollars in damage to a home. If you're taking on the role of The Kool-Aid Man, we'd sincerely suggest that you enter any room via the door. Yes, it's not nearly as intense as entering a room by bursting through a random wall, but you'll find the suit lasts much longer and you're much more likely to keep your friendships intact. And you know what, we bet the Kool-Aid Man bursting through the front door with a glorious, "Oh, YEAH!" will be just as refreshing without all that plaster clean up.

This iconic Kool-Aid Man costume is a full-body suit that's surprisingly easy to put on. Simply step in, zip up the back, and turn on the fan. You'll need 4 AA batteries to keep your suit inflated throughout your event. The suit is fitted with a screen in the front for limited visibility. Everyone knows that choosing a great costume is all about making a grand entrance. Who's better at making first impressions than the Kool-Aid Man?

Much like the beverage, itself, we can think of all sorts of great times to break out this Kool-Aid Man costume. Marching in a Fourth of July parade? Oh Yeah! Showing up as an unexpected guest at your friend's pool party? Oh YEAH! This costume can be brought out long after Halloween is through. Just remember to steer clear of smashing through walls. That doesn't go nearly as well outside of television commercials!