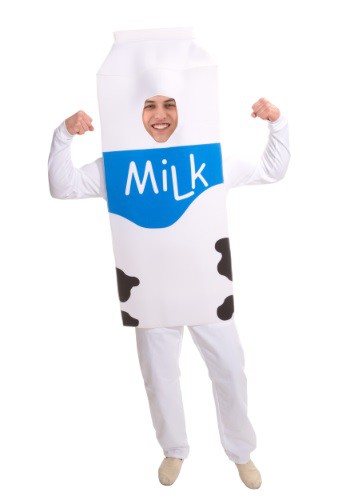 "There's only one thing I hate more than lying: Skim milk. Which is water that's lying about being milk." - Ron Swanson, "Parks & Recreation"

Listen, we could do the obvious thing here, which is deliver a whole bunch of "Got Milk" puns, but trust us - there will be plenty of those delivered (get it? Kind of like how milk used to be delivered to houses?! That's the only pun we'll do this whole time, we swear!) to you once you're wearing this costume. Instead, we'd like to use the thinly-veiled quote above as an opportunity to talk a little more about a great American Hero: Ron Swanson.

Are you aware that Ron Swanson loathed skim milk so much that he included it on his Pyramid of Greatness twice? Listened in Category 5 was "Skim Milk. Avoid it". Then, again, in Category 7, it comes up again: "Skim milk: That's right. It's on here twice. Avoid it." And it's been our experience that Ron Swanson, a frank, deliberate man, is rarely wrong about anything.

But listen: You don't have to worry about that! It's obvious, from first glace at this Adult Milk Costume, that you're whole, pasteurized, chock-full-of-Vitamin-D milk all the way, baby! Maaaaybe 2%, if you're fancy. Lactose-free, if you're feeling crazy and/if you've got a medical thing. The point is, in this thigh-length pullover tunic, people are gonna drink. you. IN! Wear it with a white shirt and pants for extra creamy goodness. You could even pair it with a cow costume or another food item for a fun and creative couples theme, or just wear it on your own when you're ready to get "dairy" (yeah, so we totally lied about that pun thing) crazy up in this barn party!