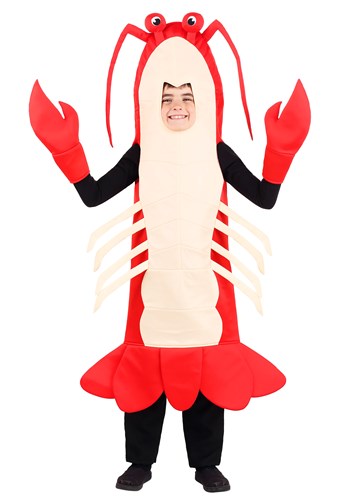 Some kids just follow the beat of their own drum. When you ask the average kid what their favorite animal is, they'll often come up with the same answers. You know, like cat or dog. Some get a little exotic and go with elephant or lion. But you know what? We have a TON of costume options for kids who love cats and dogs. It's awesome that they like those everyday sorts of animals, but we also wanted to make sure that EVERY kid can be their favorite animal! We wanted to make sure that kids who like the weird animals get to have their shot too! Yes, we mean those kids that proudly blurt out "ROCK LOBSTER!!!" when asked. Completely unapologetic. Without hesitation.

We hold a place in our hearts for the rock lobster kids of the world. Why? Because they're the special kind of weird that makes living in this world awesome. Be proud of your rock lobster-loving kid and send them out trick-or-treating in this Kid's Rock Lobster Costume!

Yes, our designers were just like your child when they were young. They were the unabashed weird kids of the world, so they get it. They get why your kid would be in love with the rock lobster. That's also why they designed this costume! It comes with a simple, red bodysuit that has a white belly and tons of little legs attached to the chest. The bottom is shaped like a tail and the top portion of the suit looks like a cartoonish lobster head. It features a large opening for your child's head and it even has a pair of bulbous eyes on top. To top the whole look off, the costume comes with a pair of claw-shaped mitts that fit over your child's hands.

If your child loves rock lobsters, or just wants to stand out from the crowd at the costume party, then try this Kid's Rock Lobster Costume. We all know that the lobster kids make this world a slightly better place.