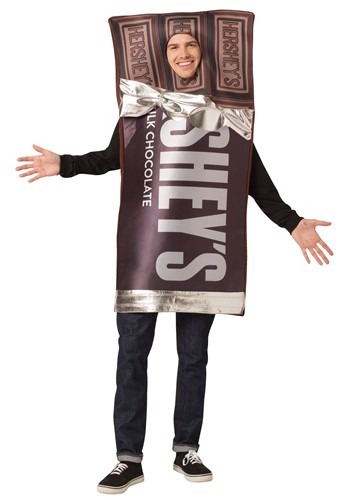 What do you think of when you're asked about your favorite desserts these days? Do you think of a syrup-soaked cake topped with almonds, or a mixture of yogurt balls with honey? Or do you reminisce on milk tarts or butterscotch pudding? No, you don't. Because hundreds of years ago, a humble bean took over the dessert game for good. Chocolate, wonderful chocolate, is rather hard to beat when it comes to flavor. It's not that the other desserts aren't good it's just that they could be better if only chocolate was added! While the ancient Mesoamericans already revered the cocoa bean for its invigorating qualities, when chocolate was introduced to Europe, it really took the world by storm. Sugar was added and it became the main drink of the Spanish court. People would never look at their poor chocolate-free desserts in the same way. Talk about your humble pie!

Are you ready to represent the most delicious of sweets? This Hershey's tunic makes it easy! The costume is simple. It slips over your head with holes on the sides for your arms and a hole for your face on the front. The dark brown Hershey squares are accentuated with the silver wrapping that we all know well from our days of S'more making!

The cocoa bean has always been popular. People have mixed it with chili and spices, with creamy over-the-top desserts, and of course, amazing cakes! Dressing up as the most famous chocolate bar is almost like cheating this Halloween. Of course, you'll be everyone's favorite costume around if you're manipulating their taste buds. You're just lucky that there's usually plenty of candy laying around on Halloween. After all, people can only control themselves to a certain extent when they're around a man-sized chocolate bar. There's no keeping it under wraps!