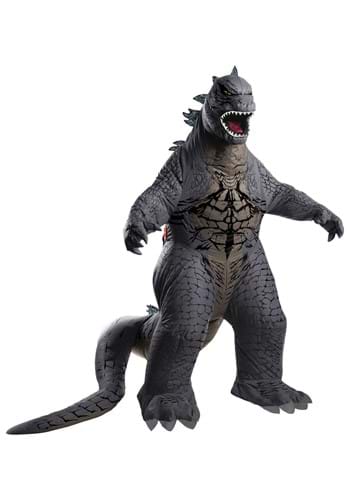 Laiiiiideeeeees and gentlemennnn!! Step right up and see the greatest fight of the millennium, occurring right here, right now, in downtown Hong Kong! No, we're not talking about those WWE schmucks. In one corner, we have an oversized gorilla whose weapon of choice is a helicopter that he enjoys swinging like a club. In the other corner, we have a giant prehistoric lizard with an incredible row of biters and atomic breath. Now, we don't like to sound biased, but as awesome as the gorilla is, we're inclined to put our money on ATOMIC BREATH. But don't let us sway you! Let's watch them duke it out among highly breakable skyscrapers and metro infrastructure!

Everyone fears the might of Godzilla, and everyone will cheer when they see you in this officially licensed Inflatable Godzilla VS Kong Godzilla Adult Costume! The one-piece jumpsuit slips on over your street clothes and inflates via an attached fan (batteries not included). All that air gives you an epic, monster-like figure, from your scaly, three-toed legs, to your muscular arms. An oversized tail snakes from the back of the costume and can be dragged impressively across the downtown subway track - or across the dance floor, depending on your preference. The enclosed head features Godzilla's angry narrowed eyes and open mouth, which displays a ring of white teeth. The mouth also serves as a viewing port so you can see where you're going.

Wrath of the Titans

This is your world - everyone else is just living in it! This Halloween, show the neighborhood who is the most impressive fighter of all time. MechaGodzilla, beware!