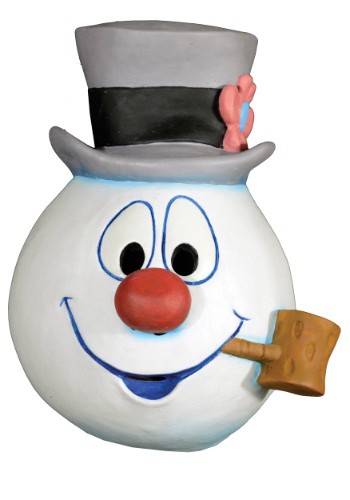 If your childhood was anything like ours, you absolutely adore the Rankin/Bass animated Christmas specials. They might be hokey, but they feel like a connection to a simpler time––nothing anti-diversity, but a time when children didn’t have Playstations or Adventure Times, and settled for whatever entertainment was put on in front of them, and got engrossed in it too.

For children of a certain generation, Burgermeister Meisterburger, the Island of Misfit Toys, and Frosty’s puzzling catchphrase “Happy Birthday!” are as much fixtures of the arcane Christmas mythology as Santa and Rudolph. If this is all true for you, the scene where Frosty melted away made you cry, and possibly still does. We may be a big corporation, but we’re allowed to feel things, dang it! Frosty the Snowman definitely did that, and that’s why we love this Frosty the Snowman Adult Mask. We think it’ll make an awesome look for any Christmas event this winter. The snow might melt eventually, but just remember, he’ll be back again someday! And luckily, this mask does not melt (that would be kind of a rip-off wouldn’t it?), so you can bust it out for Christmas in July to your heart’s content.

Like Rudolph, Frosty’s tale might have been brought to our attention the first time by singin’ cowboy Gene Autry––who, it should be noted, starred in one of the first cinematic universes, playing himself, a singin’ cowboy, in almost 100 movies and serials, including science fiction ones like The Phantom Empire where he stumbled upon an ancient, advanced civilization called Mu deep underground beneath his ranch––but it was truly brought to life by the Rankin/Bass television special. Every year, they play on TV and you can relive the wonder and awe of piecing together how exactly the bizarre holiday pantheon of Jack Frost, the Winter Warlock, and Heat Miser fits together. Because what else is Christmas really about?