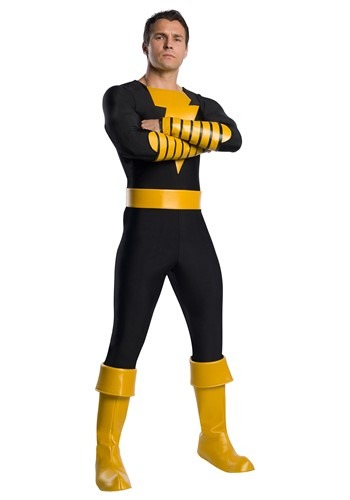 Shazam Before It Was Cool

We all know the story by now. Young Billy met a strange old wizard, proved that he had a pure heart, and learned a magic word. Suddenly, he was bestowed amazing powers from the great deities and old sorcerers of the past. Putting Superman to shame, Shazam has all the Boy Scout's powers plus resistance to magic and the ability to chuck out lightning bolts and even share his power! Pretty impressive stuff for anyone, right!?

Well, no matter what awesome hero DC wants to throw out, there's always someone just a bit stronger who has been at it for just a bit longer. Turns out in Shazam's case, that guy was a young Egyptian prince who was meant to get Shazam's powers to begin with and, instead, received his powers from a host of ancient Egyptian gods. He might have become the greatest hero we'd ever known if the sunshine didn't go a little... black. It is time for that dark sun to rise!

Call on the might of a few different powers when you channel the might of Black Adam in this officially licensed costume. This jumpsuit zips up the back and features the iconic part-time villain in his full black attire, gleaming yellow boot covers, gauntlets, and the lightning bolt on the chest. All accessories fit with elastic and hook and loop closures and the jumpsuit is stretchy to make for a superheroic fit. Cinch that belt together to finish off the look and prepare that cold stare because even Shazam should be trembling at your experience!

Shazam might have some incredible powers, but Black Adam has been at the job for several centuries more. The best part is that you can channel your dark and vengeful powers in this officially licensed costume or you can remind everyone that you're only a villain because everyone else found your powers just a bit too mighty!