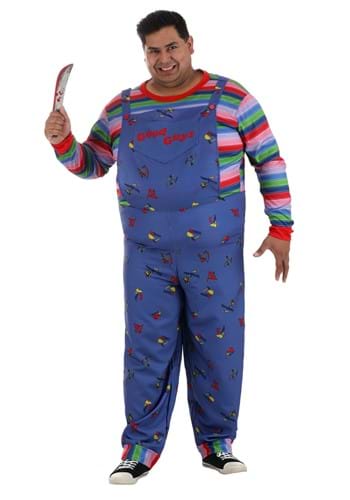 The fandom of serial killer shows rises to new levels every year. We're curious about their minds, their habits, and sometimes even their clothing options. Give us a three-name moniker and a stance that draws us into the uncanny valley and our intrigue is immediately awakened! Of course, all of that took a supernatural turn when Charles Lee Ray revealed that he had more up his sleeve than just a wicked knife.

With a few uttered incantations and a nearby Good Guy doll, suddenly the killer of many became a fashion assassin, too! When folks thought that nobody could pull off adorable overalls and horizontal stripes, Chucky showed up and proved that all it took was a twisted mind to make even the most unusual apparel something to die for!

Well, you don't have to worry about getting caught up in voodoo or homicidal tendencies just to show off the signature Child's Play style. With this officially licensed Chucky costume, you'll be able to show up, command the catwalk, and also leave people in stitches with your take on slasher movie marathon makeovers.

This jumpsuit is printed to recreate the Good Guy Doll look, including faux overalls attached to a colorful striped shirt. Hook and loop strips in the back serve to fasten the top and faux buttons and the Good Guys label are featured in the front! Now, go slay in this style!