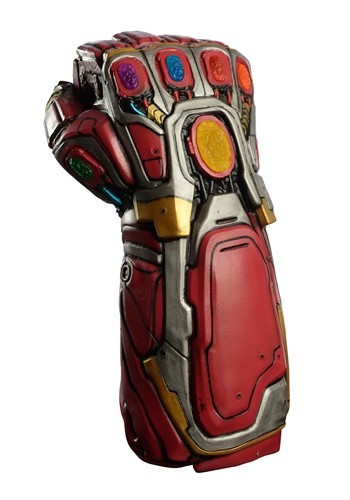 Suited Up in Style

Some say that Iron Man is the best of all the superheroes. Okay, not that many people say that. Folks are usually going on about Captain America or Thor, if we're being honest. (Actually, people seem to think Loki would make the best Avenger.) But, the point is that Iron Man is still pretty up there. And, with his recent actions and the ability to command the Infinity Gauntlet... well, a lot of our dreams are going right down Iron Man's alley, these days. So, naturally, when it is time to gear up and look great, Tony Stark's Iron Man guise has become the way to go.

No doubt that your kiddo's Iron Man dreams are already pretty intense. But, you can add to that superhero style with a little extra might. In fact, you could give them the entire cosmos of power with this officially licensed Iron Man Infinity Gauntlet from Avengers: Endgame. This is a molded foam gauntlet designed to look just like the engineered Infinity Gauntlet designed for Avengers use, only! It has faceted faux gems on the knuckles and back of the hand, too. We're relatively sure that they're not the real Infinity Stones, but your tyke might want to be careful with those snaps, just in case.

An Extra Snap of Strength

There's nothing like the perfect accessory to put the final touch on a costume. When your little Iron Man is ready to save the world, they could trust in JARVIS or they could head into the fray with the dazzling boost of the most powerful gauntlet in the multiverse! Is there even a question!?