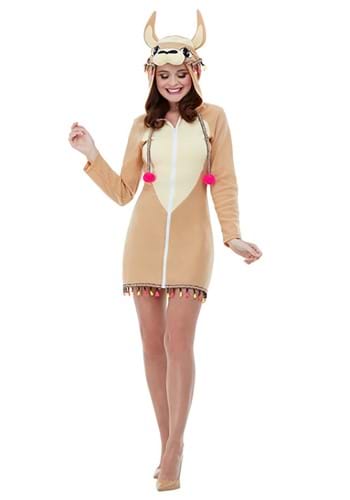 In the world, there are what we call animal trends. For a long time, it was birds (Put a bird on it!), then owls (a more specific bird trend). There was the hedgehog phase, followed by the cute sloth scene. And then, of course, there were llamas. And while the other sparks seem to fade as fast as they arrive, it turns out, llama love is here to stay!

And thank goodness, because llamas are amazing! And you certainly make an already sweet llama look even more appealing in this Women's Brown Llama Costume. It's a simple and sophisticated take on a cute animal costume this Halloween.

This cool little dress not only makes you feel great, but it also turns you into a lovable brown llama, instantly! It zips down the front, passing through an ivory "underbelly" patch, as well as the costume's allover brown fabric. Yellow and pink tassel fringe adorns the bottom hem, giving a nod to llama's South American roots, while bright pink pompoms give a pop of color to the dress's hood strings. The hood pulls up to reveal a cute llama head atop your own, complete with ears, snout, and more tassels. A tiny llama tail on the back of the dress completes the look.

Hey, guess what? We hear you won this year's costume contest! Leave it to you to be the leader of your pack and bring home the prize. Now hoof it to the stage and claim your trophy—as it turns out, this llama look is as timeless as they come.