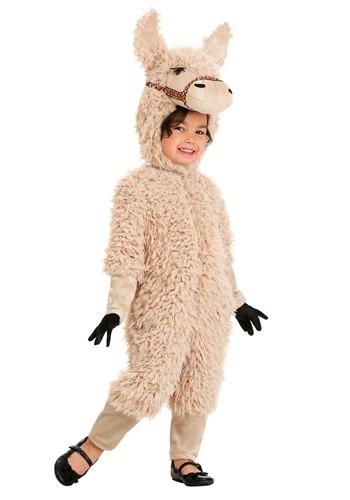 Socks, our office llama, brought his sister, Dolly, to visit a while ago. We were all very excited to meet her, assuming that she would be as silly-spirited and fun to be around as her big brother. Unfortunately, that was not the case. Turns out, Dolly is going through, what we can only assume is the equivalent to a llama's Terrible Twos.

The morning started with Dolly upset about not having enough for breakfast. We heard Socks tell her that he'd offered three different grass-cereals to her and she'd snubbed them all, so we weren't sure how to help there. But Dolly found the popcorn machine in the game room and enjoyed a few unpopped kernels, which seemed to calm her down. The prompt nap she took may have also contributed to the sudden calm. When Dolly woke up she wandered over to our design department and took a look at all their latest projects. That's when things took a turn for the worst. Dolly spotted the costume we had made in honor of Socks and became, well we think jealous is the word... this is not really the place to go into details about all the drama that ensued. We will keep the long story short. After the dust settled, we agreed to design a costume that youngsters could wear to look just like Dolly, and this Toddler Llama Costume is the awesome result!

Our team of designers really captured the beauty of Dolly with this costume (because they were told to). The exclusive  Llama Costume for toddlers is made using a long pile, sherpa fleece that is equally as warm as, but softer than, the inspiration for the costume. Knowing Dolly wanted something that reflected only her best qualities the hooded jumpsuit was designed while we watched Dolly taking a second (oddly peaceful) nap. The attached plastic eyes and felt eyelashes make this llama costume a true charmer. To prevent a case of mistaken animal identity, soft-sculpted ears and a festively-colored bridle are featured on the hood as well. Your toddler is going to look adorable, just as Dolly requested.

Upon reflection, Dolly's visit wasn't all bad. We were able to create a new costume and had the chance to learn a lot about how the Terrible Twos work. Now we hope, your toddler has grown out of that phase, but if not, at least they will look super sweet in this Made By Us Llama Costume!