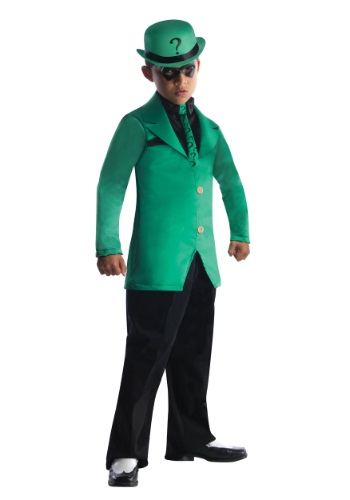 Riddle me this, riddle me that. Who's afraid of the big black bat?

In the hierarchy of villains, Batman has some of the best. The Joker of course. He is classic. Dr. Freeze, is on cool cat. (Pun intended.) Oh, and how could we forget the Scarecrow? We couldn’t, unless he laced our coffee with something...now that we think about it...what are we doing?

But there is one villain who is a step above the rest. One that taunts the Caped Crusader at every villainous turn. A man who came up with such riddles as, "What weighs six ounces, sits in a tree, and is very dangerous? A sparrow with a machine gun!" And that diabolical villain is the man in green, the question mark adorned Riddler.

"What belongs to you but is used by others? Your name." Now your son can use someone else's name. And that name is Edward Nygma. Also known as The Riddler. This Boys Riddler Costume will have him going toe to toe with the Dark Knight. He wont end up stuck in Arkham Asylum (for long anyway) like the Scarecrow. He wont even be stuck in Gotham like the Joker seems to be. He will travel far, and wide, riddling Starling City with crimes befitting a true comic book villain. Just make sure your son isn't afraid of the big black bat before putting this costume on him.