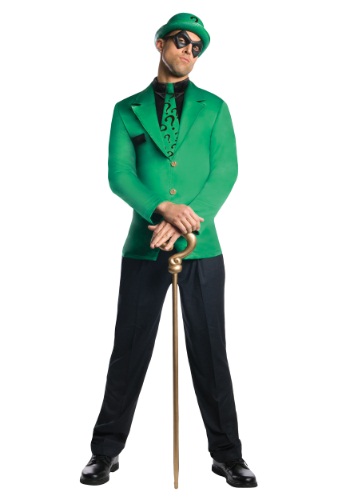 You love puzzles don’t you? We’re not just talking about jigsaw puzzles, but complicated logic games and mystery stories; you just can’t get enough of those who-done-its with what weapons and in what rooms?

In fact, you love them so much that you’re thinking about putting together your own mystery for others to solve. Well then, this costume would be perfect for you. You know who else loves to create elaborate puzzles for someone else to solve? Edward Nygma, better known as The Riddler, does! The only problem is that you’ll be making puzzles for Batman, the World’s Greatest Detective himself, so you’ll have to be using your sharpest wits to keep two steps ahead of him at all times. With this Adult Riddler Costume, you’ll have all components of Nygma’s classic look: the green blazer, the eye mask, and of course, the bright green Question Mark Hat. The only thing that doesn’t come included is a grand plot to ultimately confuse and embarrass Batman. But we’re fairly certain you already have most of that in place.

So, once you have this costume and you’re wreaking havoc all over Gotham, make sure you don’t give yourself away in a moment of arrogance, just like Nygma is known to do. Batman will be on you in a moment if you do, and then, it’s straight to Arkham for you. Be careful with your brilliance, is what we’re saying.

Questions & Answers
Q: Hello, does the riddler costume come with pants. the description does not mention pants.
Asked by Alex | April 26, 2022
Answer
Ask a Question
Reviews
Write A Review
Sort By Most Helpful
Filter By All Ratings