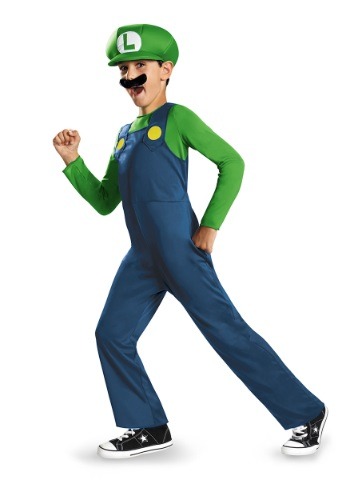 Sidekicks don’t come much more lovable than Luigi, the world’s second most famous plumber/adventurer. Sure, Luigi’s been the star of some games of his own, but he’ll always be living in his brother Mario’s shadow. But you know, that seems to be just the way Luigi likes it. He may not get as many headlines, but he still gets to zip around on wild adventures through mushroom kingdoms and haunted mansions and crazy race courses, and he even gets to save the day on a fairly regular basis. What more could a laid-back plumber in green ask for?

Show your support for the second banana with this officially licensed Luigi costume, featuring a polyester jumpsuit sporting Luigi’s signature overalls and green shirt, plus an oversized foam hat emblazoned with his iconic “L” and an equally iconic foam mustache (adhesive included). Big-name heroes are all well and good, but sometimes you need to let the world know you appreciate the other guy.