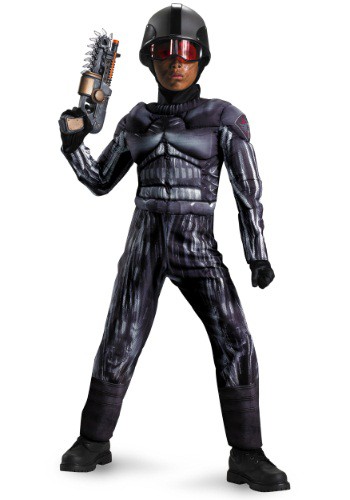 Look at how awesome this costume is! This costume is made out of boy dreams. A helmet and visor, muscle padding, SWAT armor print?!?! This is "How is this even in stock?" level of cool. Basically, every boy from age... let's say one. One is a good age to start. Most boys from age one to... forever (safe bet) want to be a protector badass dude who can handle anything, whether that's regular boring old criminals or mutant robo-dinos from another dimension (hey, it could probably happen, and if he wasn't prepared, what then?). So naturally, they will be drawn to the idea of being a super-muscled, helmeted SWAT guy ready to take out any threat. Besides, how else are we going to make some serious super soldiers if we don't start training them at a very young age? It's like no one takes national defense seriously anymore. But now's your chance to recruit the best of the best, and ensure that your kid will be chosen for that highly classified and extremely dangerous genetic modification project. We'd tell you more but... well, we don't even know ourselves. That's how secret it is.

Or maybe he'll just be defending the house from the occasional rogue squirrel. Whatever the case (whether super soldier recruit or squirrel defense), your kid will be prepared with everything he needs. Besides, haven't you always wanted a home security system? But they're just so expensive, right? Well, put your son up to the task. Not only will he spend hours occupied with crawling around the lawn, but he will also probably build several deadly booby traps should any bad element approach your house (give a heads up to the mailman, would you?). You need this, he needs this. Gear up!