Man of Your Dreams: The Evolution of Freddy Krueger [Infographic] 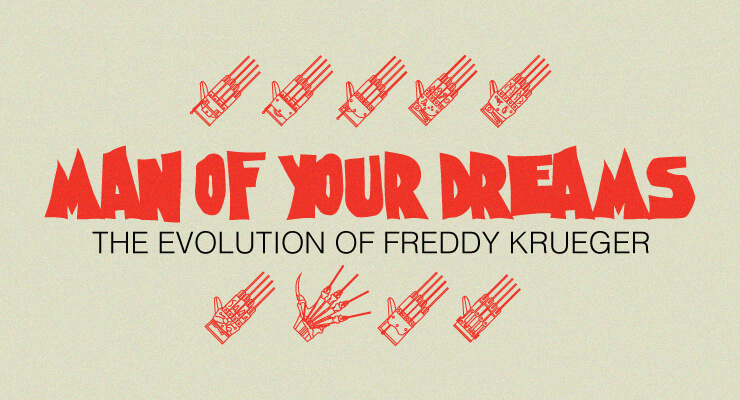 Take a moment to relax. Find a nice, quiet room, and lay down in the dark. Close your eyes. Feel yourself drifting off to sleep… Suddenly, you see a figure off in the distance. The vision is hazy at first, but then he slowly rises into focus. You can see a ragged striped sweater on a tall lurching body. An old brown hat with a wide brim. A sharp ray of light flickers: he has blades coming from his sleeve, like every finger is a knife. Burnt, disfigured skin glistens in the moonlight. Finally, the man of your dreams fully appears in front of you: it’s Freddy Krueger. One of the most infamous movie villains of all time came into the pop culture lexicon in 1984’s A Nightmare on Elm Street and throughout the 9-film franchise, Krueger’s look changed bit-by-bit, burn-by-burn, and other such b-words that Freddy is well-known for spouting. We’ve created this infographic showing the changes, as well as Krueger’s kill count per film and interesting facts about each movie. See for yourself, but whatever you do… don’t fall asleep.

Man of Your Dreams: The Evolution of Freddy Krueger Transcript

Thanks to the success of this movie, New Line is sometimes called "the house that Freddy built".

Robert Englund, the actor who plays Freddy, cut himself the first time he tried on Freddy's glove.

Freddy is only on screen for seven minutes in A Nightmare on Elm Street.

The man of your dreams is back.

Robert Englund plays the bus driver at the beginning of the film, sans Freddy makeup.

Freddy is only on screen for 13 minutes of the movie.

There was a new makeup artist for this film, and with only a few images and the first movie as a reference, the new artist, Kevin Yagher, redesigned Freddy's look. He took inspiration from photos of burn victims and made the facial bones more prominent.

The infamous bedroom dance scene was an homage to Risky Business, and actor Mark Patton has admitted that he was too embarrassed to do it before finally filming it.

If you think you'll get out alive, you must be dreaming.

Robert Englund once fell asleep in his dressing room after a long day—he awoke to see himself in full Freddy attire and makeup in his mirror and scared himself.

In the film's original script, one of the teenagers dreams themselves into a giant robot battle to battle Freddy. It was scrapped due to budget.

The little bar where Nancy meets her father is named "Little Nemo's," after the comic strip "Little Nemo in Slumberland," which features a kid's adventures in his dreams.

Freddy doesn't speak until 39 minutes into the movie.

Terror beyond your wildest dreams.

The first movie in the Elm Street series where Robert Englund receives top billing in the credits.

Alice works in a diner named the "Crave Inn," a nod to creator Wes Craven.

One of the vials of blood that Nurse Freddy holds in the hospital sequence is labeled "Englund".

The only Elm Street movie to feature a rap song in the end credits. "Are you ready for Freddy" was performed by the Fat Boys, with Freddy himself rapping lyrics in the song.

The lowest-grossing film in the franchise.

The Freddybike's license says "FREDDY" and is from California.

The director himself thought the comic book scene was silly, but since he was a fan of comics, he wanted to keep it in.

Right before the end credits roll, familiar laughter is heard. The sound clip is Vincent Price from the end of Michael Jackson's "Thriller".

They saved the best for last.

Peter Jackson wrote a draft for this film that was not used.

The first film in the Elm Street series to not include little girls jump roping and singing Freddy's rhyme.

Rachel Talalay was the only female director of the Elm Street Movies.

Robert Englund has said that his favorite death in any of the Elm Street movies was Carlos'—death by hearing aid.

This time the terror doesn't stop at the screen.

Wes Craven's depiction of Freddy in this film is more similar to Freddy in the first film: scary, mean, and less of a jokester.

In the end credits, Freddy is credited as himself, not Robert Englund.

The character of Dr. Heffner was a reference to MPAA head Richard Heffner, who Wes Craven was constantly at odds with during his career.

The earthquake scenes in the movie were filmed one month before the actual Los Angeles earthquake of 1994. After the real quake happened, the filmmakers got footage of actual damage to include in the movie.

Even a killer has something to fear.

Both Rob Zombie and Peter Jackson turned down directing the film.

300 gallons of fake blood were used in the movie.

One of many unused scripts featured a scene where Freddy turned a girl into a lobster and flash-steamed her to death.

Welcome to your new nightmare.

The first film where Freddy was not played by Robert Englund. Englund did give his blessing to actor Jackie Earle Haley for the film.

In her death scene, Khris is wearing a jersey with the same number as Glen, Johnny Depp's character, in the original Nightmare on Elm Street.

Freddy's face was a mix of makeup and green screen material, so CGI effects could be digitally added in post-production.

Which film in the Nightmare on Elm Street series is your favorite? (It’s Dream Warriors, right? Because that’s definitely ours, too.) Better yet, which death-by-Freddy tops your list? Waterbed? Motorcycle? Uh... cockroach hotel? (That one was weird.) Let us know in the comments! If you are as big of a Krueger fan as we are, we know you’ll love taking a look at our new, authentic Freddy Krueger mask replica. Now you're ready for prime time!