Who Ya Gonna Call?: The Evolution of the Ghostbusters Costumes [Infographic] 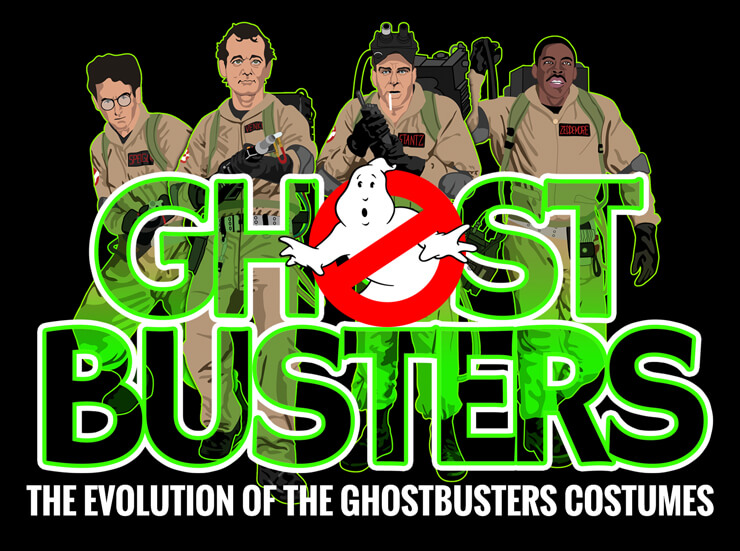 Summer of 2016 is bringing us a reboot of the popular Ghostbusters franchise, marking a 27-year gap between films. Since Ghostbusters became a cultural phenomenon in the 80s, talks of a third movie had been in the works shortly after the release of Ghostbusters II in the 90s. Dan Aykroyd, the driving force behind the franchise, initially pitched a third installment, but the studio had turned it down due to it's outrageous $150 million budget. For perspective, the 2016 release Ghostbusters has reported to have a budget of $154 million, so the budget for Aykroyd's movie adjusted for inflation would be around $275 million today! Throughout most of the past decade, Ghostbusters III had been in various forms of development with scripts being drafted and Aykroyd continually providing updates on the progress. However, the movie was ultimately scrapped in favor of the upcoming reboot.

2016's Ghostbusters will bring a fresh look to the popular franchise that started more than 30 years ago. The film will feature a new team of female Ghostbusters including Saturday Night Live alums Leslie Jones, Kate McKinnon, and Kristin Wiig, along with comedy superstar Melissa McCarthy (who has hosted SNL four times!). It may be difficult to not compare these characters to their original counterparts, but these will be all new personalities to go along with the up-to-date style of the movie. Even though the characters will be different, one thing will remain the same: an iconic uniform with a really sweet proton pack! How do the new Ghostbusters uniforms compare with those of the original lineup from the movies and TV show? Check them out here and learn some fun facts about the characters in our evolution of the Ghostbusters costumes infograhic.

The Evolution of the Ghostbusters Costumes Transcription

The original Ghostbusters, written by Dan Aykroyd and Harold Ramis, was an instant hit in 1984 and ended up being the second highest-grossing film of the year. The film follows three professors- Dr. Peter Venkman, Dr. Ray Stantz, and Dr. Egon Spengler- who investigate and research the paranormal at Columbia University. After the university pulls their funding, they band together to open Ghostbusters and eventually catch their big break (and their first ghost), rise to fame, and save New York from the demi-god Gozer. In the film, the team wore beige jumpsuits with their logo on the sleeve and black name patches with name in red.

Harold Ramis had no intentions of starring in the movie, but eventually decided he was best for the part.

Most of Bill Murray's lines were ad-libbed. In fact, almost every scene in the movie has one or two ad-libbed lines in it.

The concept for the film was inspired by Aykroyd's fascination with the paranormal.

Ernie Hudson was excited about the part and took a reduced salary to play Winston, but his role was reduced shortly before shooting in order to expand Bill Murray's role.

The Real Ghostbusters was an animated series which continued the adventures of the four Ghostbusters, as well as recurring characters such as Janine, Slimer, Louis Tully, and the Stay Puft Marshmallow Man. The show did well and ran for seven seasons. Each episode featured the team on a different adventure to defeat a new ghost. After the fourth season, the show was renamed Slimer! and the Real Ghostbusters and slightly rebooted to feature Slimer more and include lighter tones. The cartoon featured uniforms similar to the ones from the first movie, but each character had their own specific color. The show did have a follow-up series, Extreme Ghostbusters, which followed a new team of younger Ghostbusters led by Egon. Maurice LaMarche returned to voice Egon, the only returning Ghostbuster for this show, which only lasted one season.

Egon was drawn to resemble Harold Ramis, but changes were made to avoid lawsuits from using the actor's likeness without permission.

Lorenzo Music, who was the voice of Garfield the cat, was replaced by Dave Coulier as the voice of Venkman after season 2 because Bill Murray didn't like how the character sounded like Garfield.

Ray Stantz was voiced by Frank Welker, who also provided the voice of Slimer, as well as Megatron and Scooby-Doo in separate franchises.

The sequel, written again by Aykroyd and Ramis, takes place five years after the original film. The Ghostbusters are facing legal trouble having been sued for the property damage they caused. They have disbanded and are forced out of business. However, once the city is overtaken by a strange river of slime and a 16th-century tyrant named Vigo the Carpathian, the team is back on the scene. The Ghostbusters defeat the evil ghosts and save the city, causing citizens to unite and view them as heroes once again. The uniforms in this film were similar in style to the ones from the first film, but the color was changed to navy blue. Because of how successful the first film and the animated series were among children, many elements we changed to appeal to a younger audience.

The subway scene in the first film includes the first mention of "proton pack" with Egon's line "Before we go any further, I think we should get our proton packs."

Bill Murray was not pleased with how the film turned out: "It was a whole lot of slime and not much of us."

Because of the appeal to kids, almost all smoking was removed. There are only a few scenes where Ray is holding a cigar.

During the scene in the sewer which Winston is being pulled in by the slime, you can hear one of the other characters call him "Ernie" (his real name) by mistake.

The latest installation of the Ghostbusters franchise is a reboot featuring four female main characters. Like the original, former partners Abby Yates and Erin Gilbert reunite after Erin loses her job at Columbia University. They enlist Jillian Holtzmann and Patty Tolan to form the ghostbusters. In the film, the mysterious demon Rowan is on the loose, possessing humans and creating amplified paranormal activity. Once Manhattan is overrun by ghosts, it's up to the Ghostbusters to save the city and the world.  This movie features new uniforms that share the same beige color as the classic jumpsuits, but feature bright orange and white stripes. There are expected to be cameos from actors from the original film, too!

Jillian is the tech genius that creates all the gadgets used by the Ghostbusters.

Erin was once a believer turned up skeptic, up until an unpleasant encounter with an actual ghost changes her mind again.

Abby is the one true believer from the very beginning. she's the one who pulls the team together.

Patty joins the team after an encounter with a ghost because she knows the ins and outs of Manhattan and knows she can help.

What's your favorite Ghostbusters uniform? You can't go wrong with the originals, but we really like the multi-colored ones from The Real Ghostbusters cartoon. Are you going to see the new Ghostbusters reboot? There are some who are disappointed in having a reboot instead of a sequel with the original characters. While there are some sequels that came out 10+ years after the previous movie that have done really well (Toy Story 3, Mad Max: Fury Road), there's a great deal of them that just don't hold up after such a long gap in time (we're looking at you, Dumb and Dumber To). Besides, Bill Murray's unwillingness to be involved in Ghostbusters III and the death of actor Harold Ramis were only a couple of many things that prevented the movie from being made. If you are going to see the new movie, be sure to pick up some Ghostbuster costumes just in case there's something strange in your neighborhood.