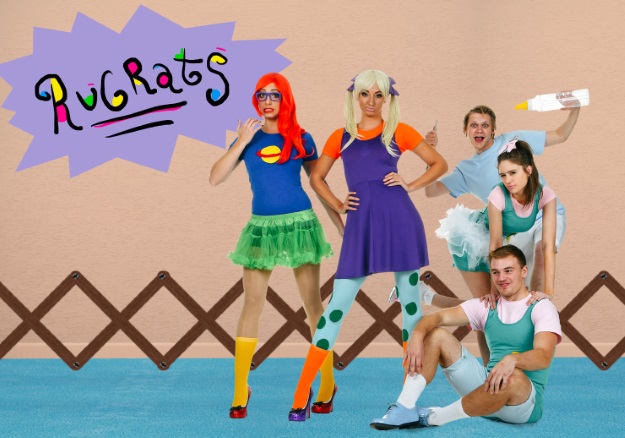 2019 Update: No need to DIY all these costumes! We now carry Angelica, Chuckie, and Reptar costumes.

Nickelodeon introduced us to Rugrats in the early 1990s and the show has been reprised a few different times in crossover television movies and even a spin-off series called All Grown Up! The original series was without a doubt the most popular rendition of the show as it followed the lives of three-year-old Angelica along with the baby and toddler combination of Tommy, Chuckie, Phil, and Lil. After earning many awards, the show was canceled in 2004 and reruns became increasingly sporadic as time passed.

A few weeks ago, the new Nickelodeon television block, Splat, included a Rugrats marathon featuring episodes with Reptar. Watching all those Rugrats episodes had us feeling a bit nostalgic, so we decided to create Rugrats costumes of our favorite characters just in time for Halloween. So, if you are planning to head out on Halloween night with a few of your friends, this DIY Rugrats costume tutorial will give you a recognizable look that everyone will love. “It’s going to take years, maybe even months, of hard work.” Just kidding, the hardest part is going to be deciding who gets to be Angelica! 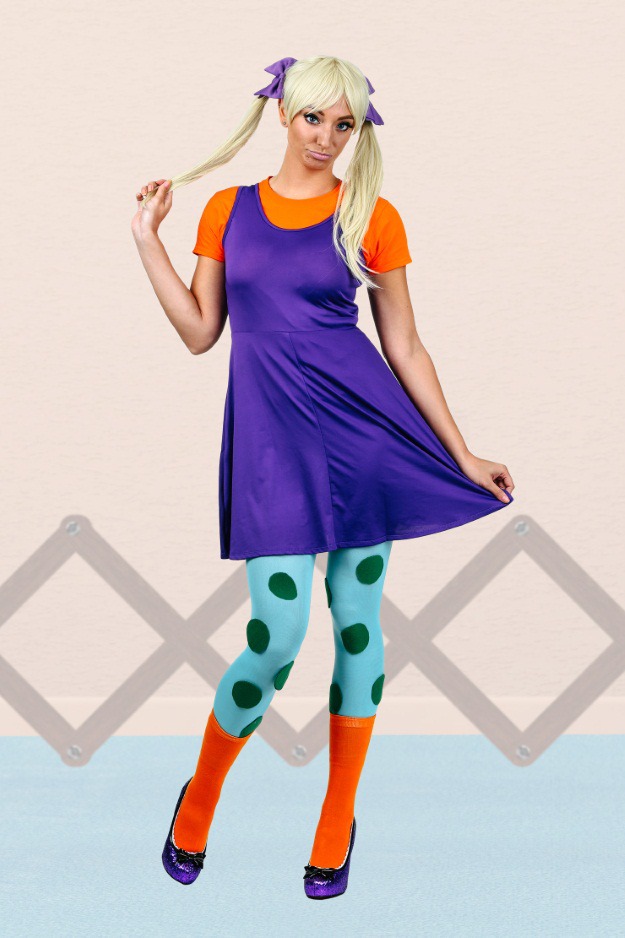 “Only some of us stay beautiful unless you go and get elastic perjury.”

Angelica is the oldest of the bunch and Tommy's manipulative cousin. She is the dominant leader of the group who you will often see yelling "dumb babies" to the rest of the crew as she convinces them to do whatever she tells them. Her feisty attitude and I'm better than you outlook on life leaves her in a bit of an antiheroine role. However, she is still a fan favorite despite her sassy antics and spoiled brat behavior. 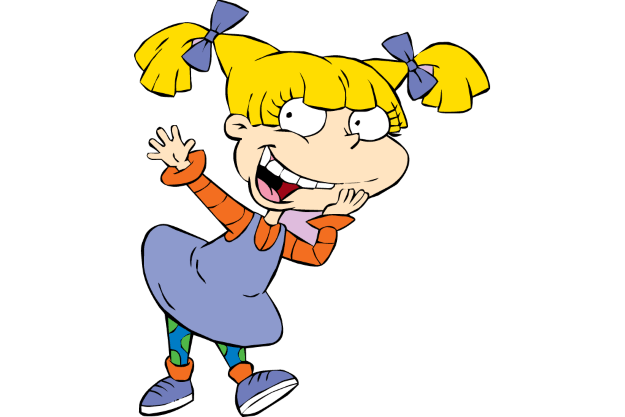 First, you'll want to cut green circles out of felt and attach them to the leggings with either spray adhesive or a glue gun. Then, you'll want to turn your Joker tank top inside out so it is solid purple, just like Angelica's iconic dress. Layer that over an orange shirt and pair it up with your finished leggings. Put on your orange socks, purple glitter heels, and you are almost ready! One of Angelica's most noteable features is her blonde pigtails and purple bows so if you don't already have blonde hair grab the wig, put it into pigtails, and attach our purple tuxedo bowties to each pigtail. Beautiful, just like Angelica! 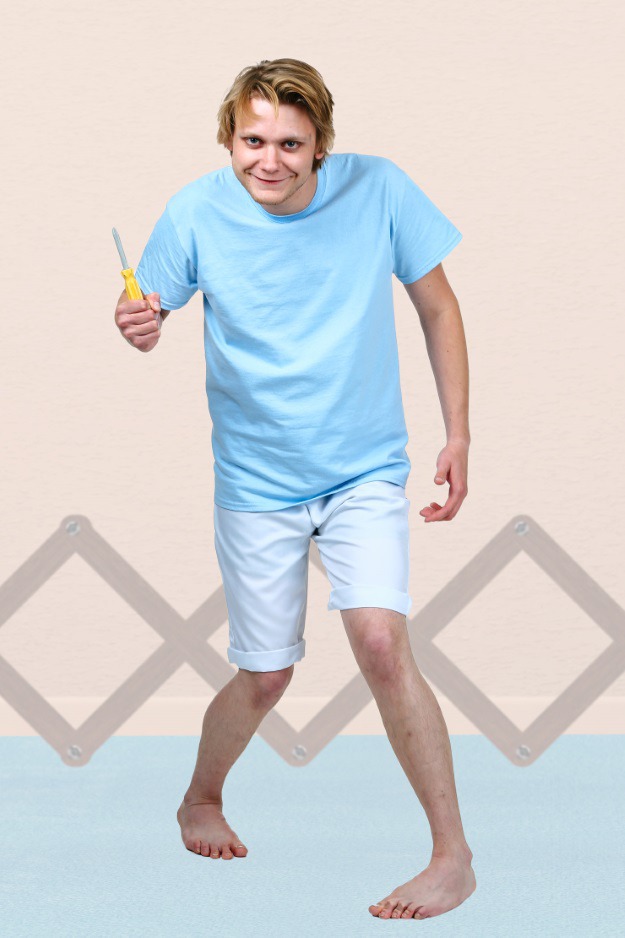 Tommy is easily recognizable by his nearly bald head, short blue shirt, and diaper. If you are extremely committed to the costume, we do have an adult sized diaper and a bald cap to complete your look. However, if you wanted to opt for a less infantile version of the character like we did, shorts are a great alternative. A fan favorite and extremely admired by all his friends, Tommy is noted for his loyalty and bravery in the series even though he is the youngest of the bunch. 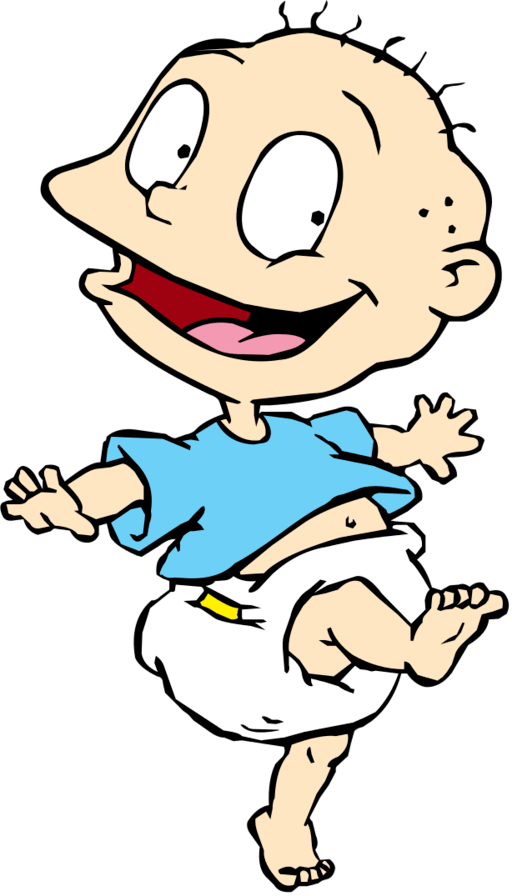 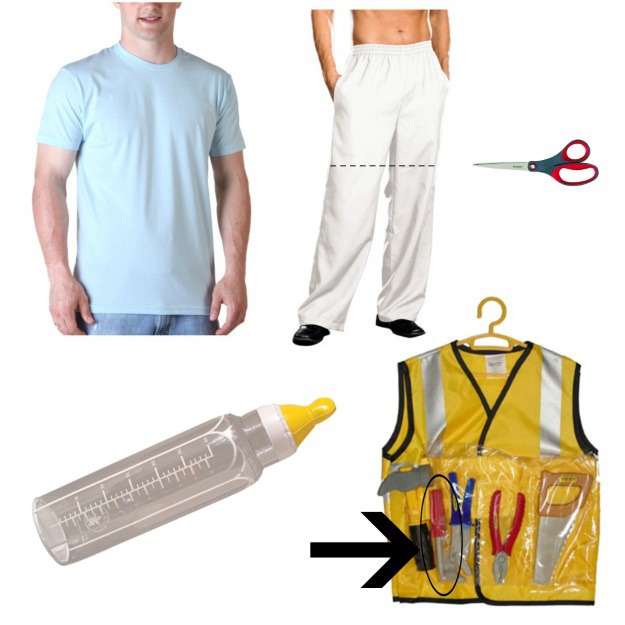 Not only is Tommy going to be one of the characters in the group costume that people fight over, but it is also the easiest costume to create. All you need to do is grab some white pants and cut them off into shorts, get the light blue t-shirt and you are almost set. Since Tommy doesn't wear shoes, we didn't include them, but if you are going out on the town for the night, wear something comfortable. In order to complete your costume, inflate your giant baby bottle, take the screwdriver from this construction worker kit, and do your best Tommy Pickles impression. "I'm heading home to have myself a juice, snuggle with my blankie, and go nap nap." 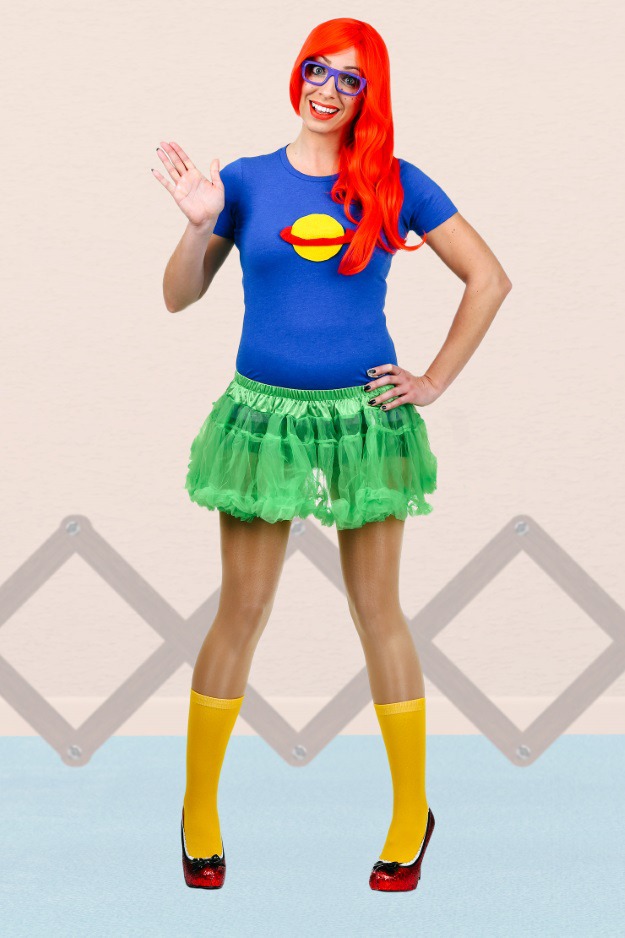 The cute buck teeth and scaredy-cat behavior of Chuckie Finster leaves many people with a soft spot for him. As Tommy's best friend, he gets caught up in the adventures that the other babies go on despite his hesitations. His famous tagline, "I don't know; maybe this isn't such a good idea," is heard all throughout the series as Chuckie battles the tough life of a two-year-old. 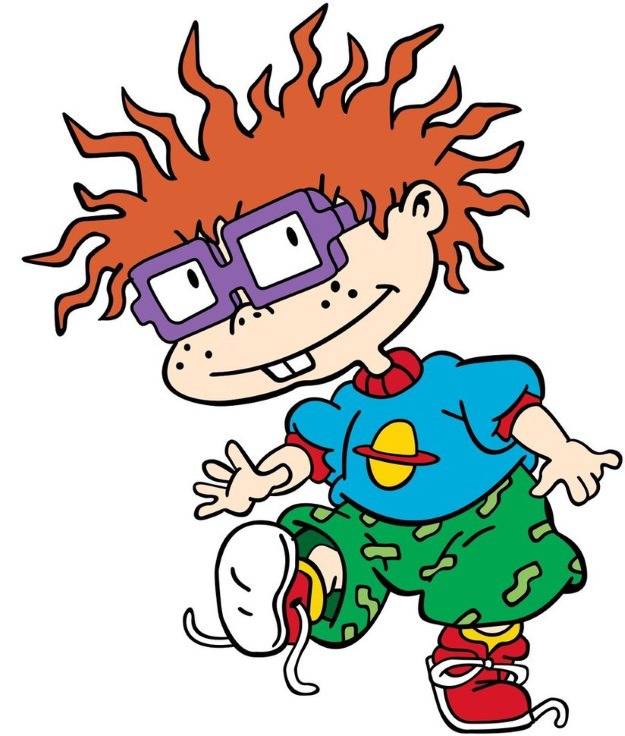 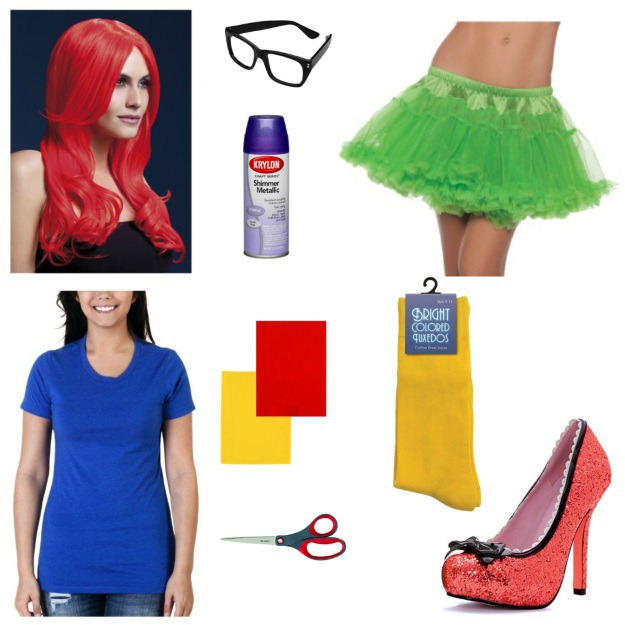 If you have an extra boy in your group, Chuckie is the obvious choice, but the great thing about many of these costumes is they can be easily adapted to male or female! For a Chuckie Finster shirt, you will need to start by crafting a Saturn shape from the pieces of felt. You will need a round yellow piece and a Saturn ring in red. Proceed by either gluing or fastening it to the shirt with double stick tape and voila! Instant Chuckie Rugrats shirt! After you spray paint the glasses purple, you will have the perfect Chuckie Finster shirt and can complete your look for Halloween night! 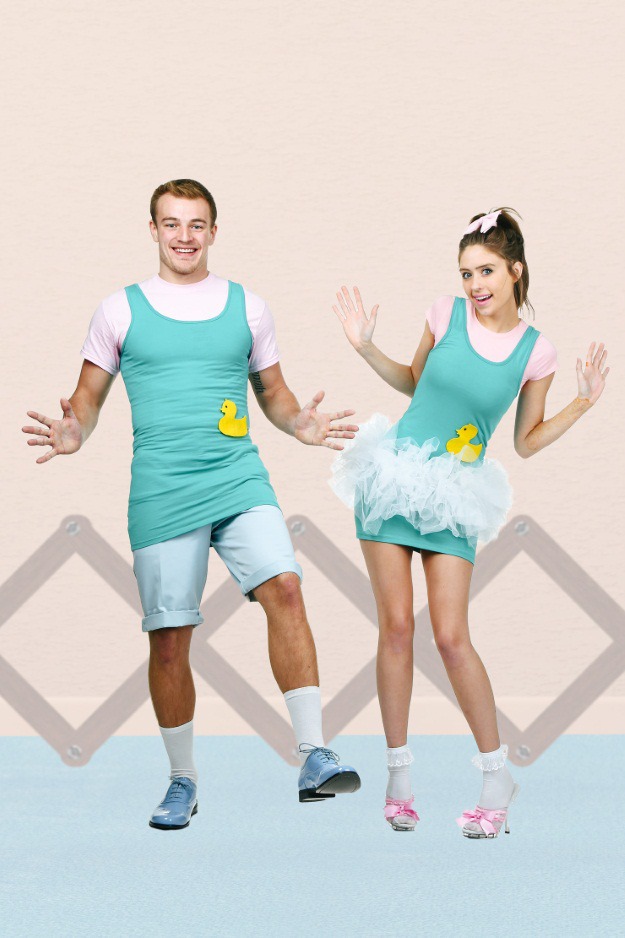 “I haven’t eated since the last time I eated.”  “This is more fun than making bubbles in the bathtub!”

Twins Phil and Lil are part of the main crew of Rugrats. They love eating chocolate spaghetti (worms), bugs, and drinking toilet water. (Gross!) Phil and Lil costumes are alike with the exception of Lil's hair bow, their shoes, and Phil's shorts. Being Tommy's next door neighbors, they get to join him on many adventures. They tend to fight like cats and dogs and even use the other's full name when upset, but that's what brothers and sisters are for! 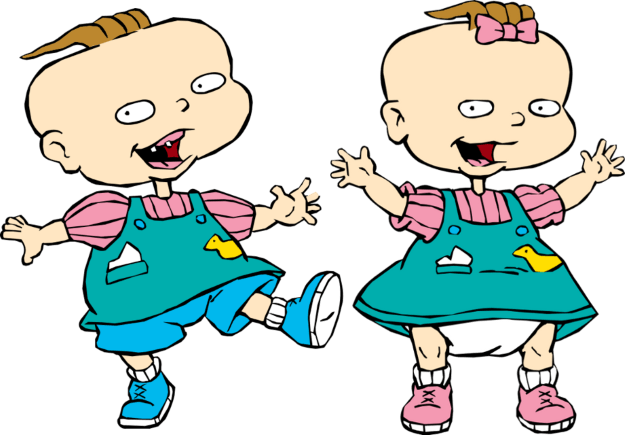 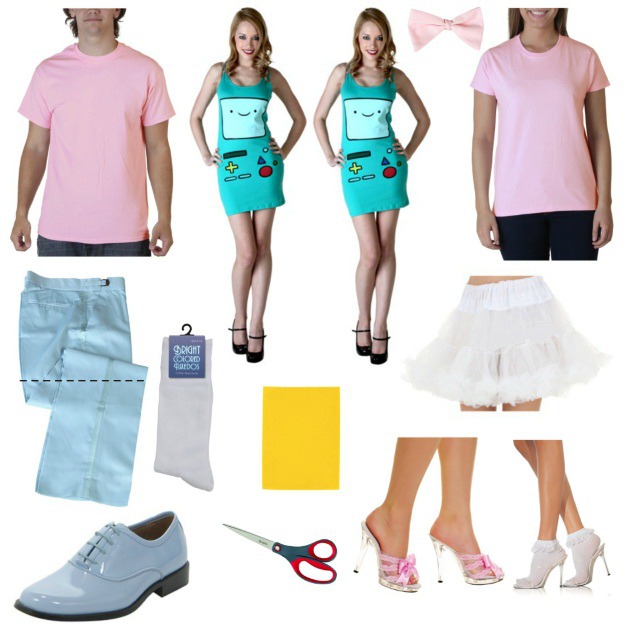 Since Phil and Lil look so similar, the costumes are very easy to create! The only crafting you will need for your Phil and Lil costume is to cut a pair of blue pants into shorts for Phil and cut two ducks from felt to glue onto their turquoise shirts. You can glue the duck to your left waistline like the picture above. Each will wear a light pink shirt with lue-green shirt or dress over the top. Lil will wear a white petticoat to resemble the diaper and Phil will complete his look with the blue shorts. If you are brave enough to carry around a few pieces of chocolate spaghetti for the night, it will be a costume that is hard to forget!

If you are feeling nostalgic and you've got some friends together for Halloween, Rugrats Halloween costumes are sure to be a hit at the costume party! Which character do you want to be most? Do you have another favorite Nickelodeon show that you would love to see a DIY for? Share your ideas with us in the comment section. If Nick G.A.S. was more your speed, click here to check out our DIY Nickelodeon game show costumes post!