The Evolution of the Flash [Infographic] 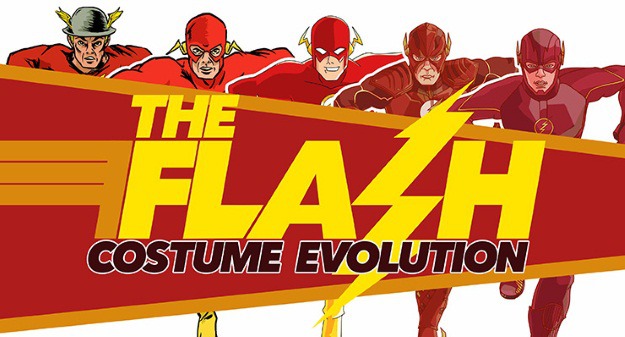 Season three of the C.W.’s hit show Arrow introduced many to Barry Allen, a forensic scientist from a little town called Central City. Barry Allen is known to many as the Flash, the Fastest Man Alive, a founding member of the Justice League, and the first official superhero of a time known as the Silver Age of Comics. The title of the Flash has been held by more than just Barry; Jay Garrick, Wally West, and Bart Allen have all held the title of Scarlet Speedster throughout DC’s long history.

The Flash’s iconic red jumpsuit has not changed all that much in his history, even when other characters like Wally West or Bart Allen took up the mantle. The Flash’s look has stayed true to that original look developed by Carmine Infantino. Since his creation, the Flash has been featured in television, cartoons, video games, and comics—each medium giving him their own unique flair. Explore how the Scarlet Speedster has changed in his 75 year history with this infographic!

The Flash, known as the Fastest Man Alive, sped onto comic book pages with Jay Garrick's debut in Flash Comics #1. The Flash would also be the hero to usher in the Silver Age of Comics in 1956, though this time Barry Allen would don the scarlet and gold. Let us take a look back at some of the most interesting incarnations of the Scarlet Speedster in his 75 year history!

The Flash first appeared in Flash Comics #1 in 1940. The first stories were written by Gardner Fox and illustrated by artist Harry Lampert. This was not the red-jumpsuit-wearing-speedster most recognize though, but a man by the name of Jay Garrick. Garrick's costume was meant to emulate the Roman god Mercury.

Carmine Infantino ushered in the Silver Age of Comics with the publications of Showcase #4 in 1956, which featured Barry Allen as a new Flash. Infantino put the Flash into a red, one-piece suit with yellow accents that would remain a part of the character's design throughout modern day.

Hanna-Barbera's Super Friends featured the Scarlet Speedster as a guest star in 1971 and as a show regular in subsequent seasons. The artists removed the white from Allen's emblem and added wings to the yellow boots, similar to the wings featured on Jay Garrick's helmet.

John Wesley Shipp, the actor who played the Flash, had to have his whole body cast to create four different latex suits for use in the show. Costume creator Robert Short said the suit was specially treated to make it look more like a stretch unitard and less like latex.

Justice League's Flash was stylized like Batman: The Animated Series and Superman: The Animated Series, two other cartoons on which this show was based. Famous cartoonist Bruce Time and his creative team designed the characters. The Flash's costume would go back to his roots, becoming almost identical to his Silver Age costume.

This franchise crossover video game brought the Flash, as well as other DC Comics stars, head-to-head with characters from the Mortal Kombat franchise. In this outing, his boots featured more distinct lightning shapes and his gloves were more like a fighter's gauntlets. The gauntlets also featured a lightning symbol on the forearms.

Injustice: Gods Among Us, another video game featuring the DC Comics characters, saw an alternate universe Flash don a suit of armor instead of his classic jumpsuit. This version of the Flash carries the same color scheme, but his armor has layered pieces and more detailed features than previous incarnations.

In the CW show, S.T.A.R. Labs employee Cisco Roman designs Flash's costume, which is originally intended to replace traditional firefighting wear. Updates in the second season of the show bring the suit closer to the classic Silver Age costume.

What a rundown! Did you see a Flash costume you liked? Which one do you love the most? Comment below with your favorite incarnation of the Scarlet Speedster, and tap into the Speed Force yourself this Halloween with our selection of Flash Halloween costumes!