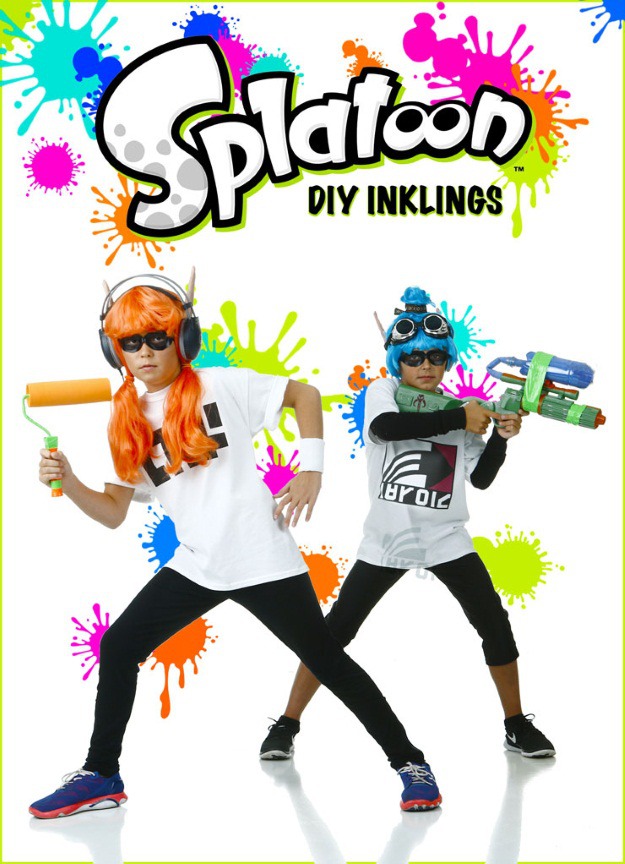 The squid kids are on the offensive! Believe it or not, the hottest video game of 2015 doesn’t involve grand theft, realistic war scenarios, or zombies. Instead, it features a group of colorfully attired half human, half squid children known as Inklings. Long story short, some 12,000 years after the effects of global warming covered the Earth in water, squid and octopi have evolved into human-like forms and began fighting over territory using modified weapons that shoot colored ink. Being a Nintendo game, characters don’t die, they just get “splatted.” Also, there is no red ink, because that would look too similar to blood.

Splatoon is a fun, addictive, multiplayer game that both children and adults have embraced. With the bright colors, cool costumes, and fun game modes, Splatoon is a huge hit for Nintendo and looks to be a franchise that will be around for a long time to come. Creating a custom Inkling costume is relatively easy. We’ve put together both an Inkling boy and Inkling girl costume using a few simple costume items and accessories. Take a look at how you can easily and affordably dress up as a sassy Splatoon kid this Halloween or convention season with our Splatoon costumes! 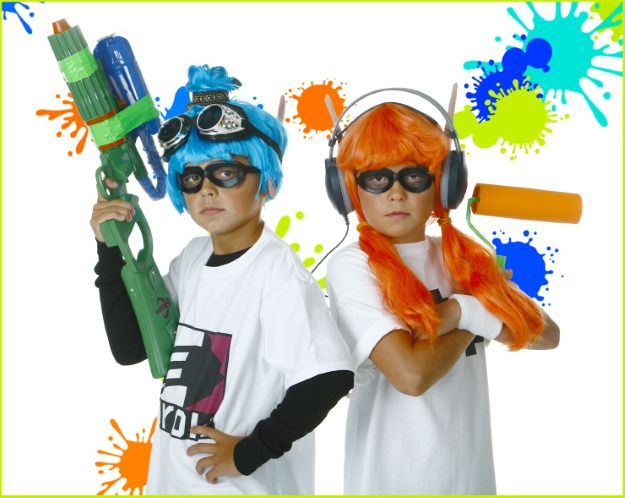 Splatoon inklings are popping up more and more at conventions and events around the globe. What better costume to show your love for all things Nintendo, and all things squid kid, than with a cool DIY costume that you made with your own two hands? We created both a boy and a girl Inkling costume using stuff we found around the warehouse and even some clothing items we already owned. Check it out!

When it comes to Inkling gender, there is not much difference in attire. Both Inklings wear flashy, neon sports attire and can wield the same ink-spraying weapons. The boy Inkling often features a top-knot hairstyle as opposed to the long, tentacled "hair" of the female. Here's our take on the Splatoon Inkling boy below. 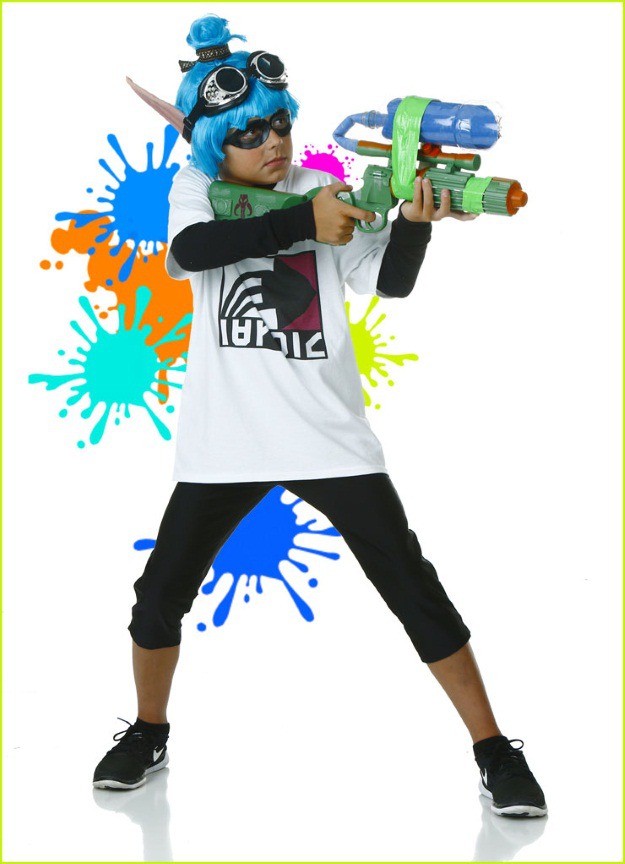 For the male Inkling, we started by doing some very minor trimming to the blue wig, finishing it off with a simple, textured hairband from our "Instant Hippie Kit" to tie around the top. We painted a small amount of black makeup around our model's eyes to fill in the space that our black eye mask did not cover.

For clothing, we started by printing out the Splatoon text and logo of a jumping squid using a custom printed shirt design. Simple black leggings or shorts work for the bottoms. Any sort of sports apparel will work as well, such as gym shorts, track pants, etc. Same goes for shoes - the Inklings wear a wide variety of footwear, from clogs to boots to tennis shoes, so almost anything goes. BUT: the sportier and more colorful, the better! Our model went with some classic black running shoes which are an item in the game. To finish off the look we added some prosthetic pointed ears and goggles to the head. 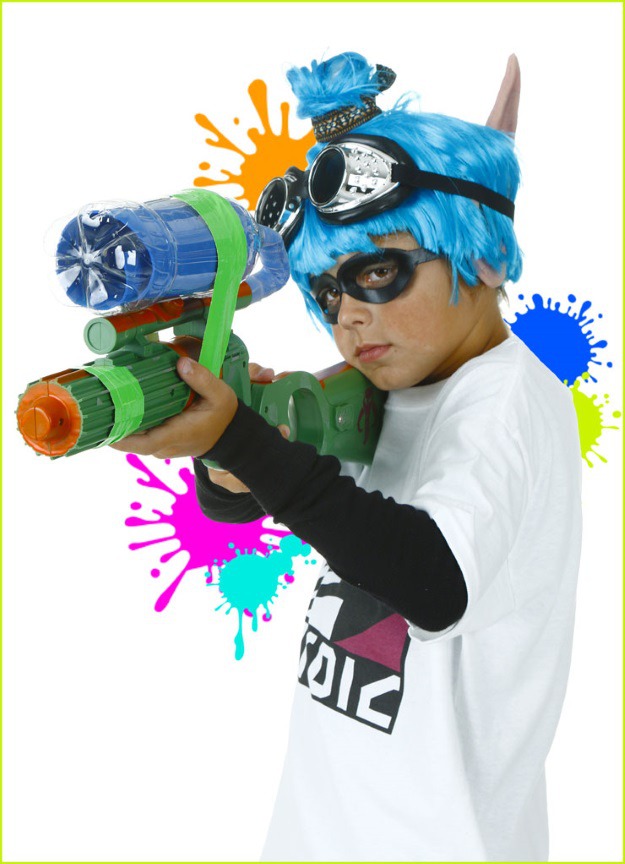 We modified a Boba Fett blaster fun with an empty soda bottle and stuffed some blue crafting foam inside to simulate the ink. We then made a makeshift pipe leading from the ink container to the blaster using the same crafting foam. Tape it up with some neon green duct tape for color accents and to hold it all together, and you should be good to go. Our custom inkling boy is now ready to ink the map and splat the enemy! 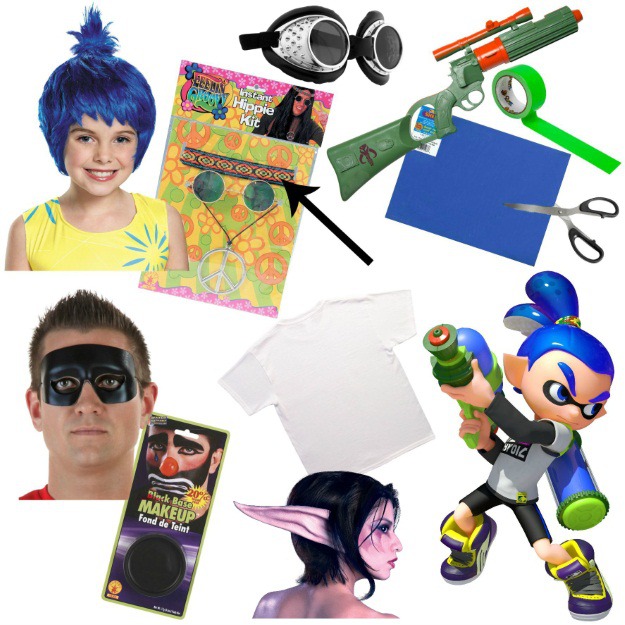 The Inkling girl is, arguably, the spunkier of the two. But the best part of the girl Inkling is the long, neon tentacle "hair" that flows down past her shoulders. We outfitted our female Inkling with a splat roller and some oversized headphones, among other things. Check out our take on the Splatoon Inkling girl below! 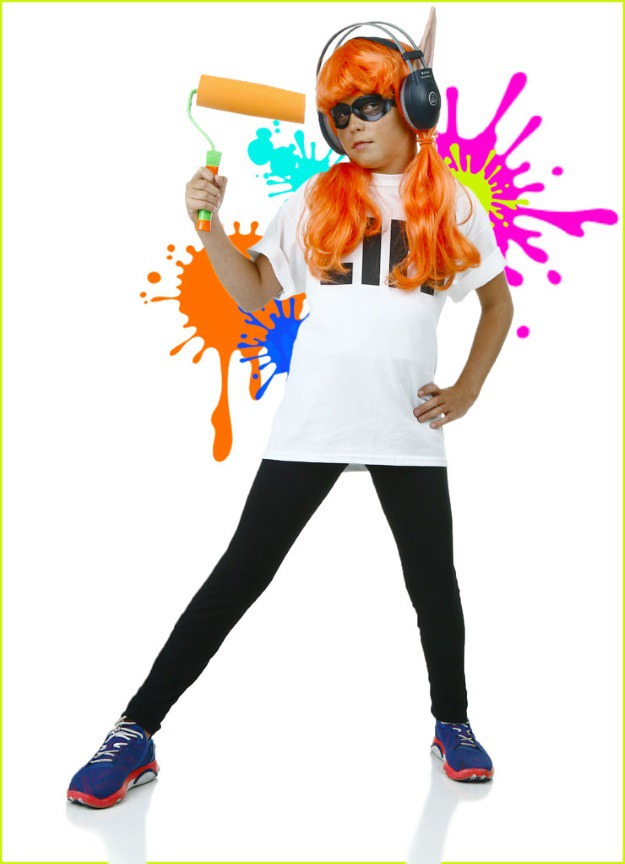 For the female inkling, we again did some minor trimming to the neon orange wig to get the proper shape. Like the male Inkling, we used a small amount of black makeup around the eyes to fill in the spaces that our black mask did not cover.

The Inkling girl's clothing feature black leggings and a printed shirt featuring text written in the unique Inkling language. Here again, any sporty apparel works great for this DIY costume. Bright, neon colors always work as long as they come close to matching the hair color you have chosen. Our model is rocking some great blue and red running shoes that were her own from home. Look through your closet and ask your friends - most people have at least one or two pairs of brightly colored sneakers at home! For the girl Inkling, we also added a white wristband for that extra touch of sportiness. To top off the look we borrowed a pair of big, expensive, over-the-ear headphones. Inklings love to jam out to their favorite chiptunes while covering the turf with ink. 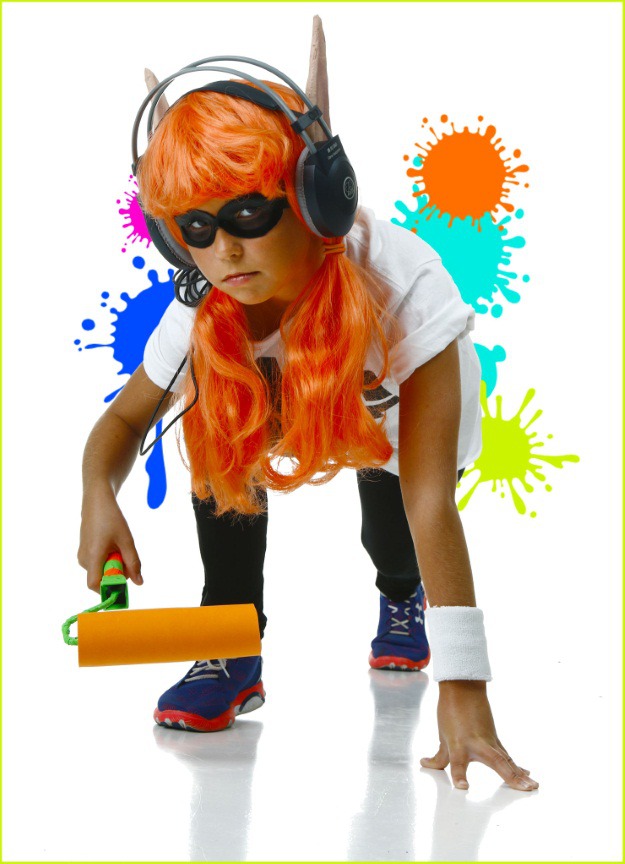 Instead of the ink blaster, we went with an ink roller for the Inkling girl. In the game, the ink roller is much, much bigger, but the smaller version is more portable for Halloween and gets the idea across. We used neon orange crafting foam (the same color as the wig) and wrapped it around the roller to simulate a wet, ink roller. We finished off the roller DIY with a small amount of bright orange duct tape to add a little extra pop of color. 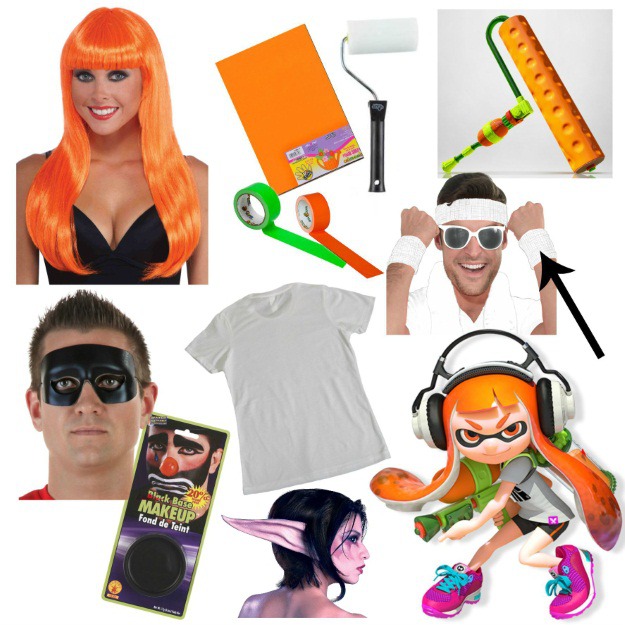 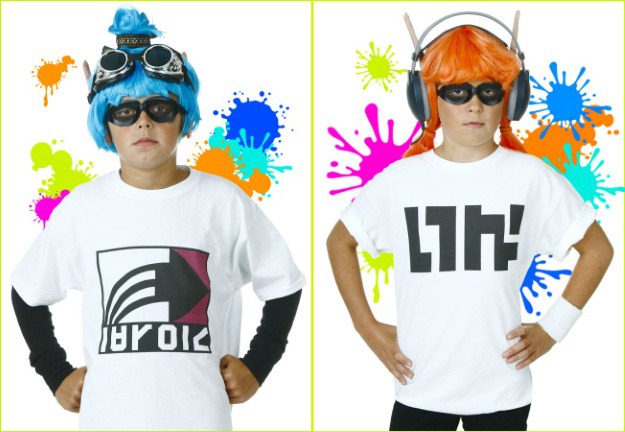 We used our custom t-shirt creator to make these shirts, featuring text based on the language of the Splatoon Inklings. The boy shirt even features an Inkling in full squid mode, blasting off into enemy territory.

What do you think of how our Splatoon kids' costumes turned out? Anything we missed that you would add to complete the outfit? We've seen some great Cosplayers create some really awesome Splatoon outfits. We aren't trying to compete with them, just to create a cool costume that people will recognize, and hopefully to inspire those of you thinking of creating a Splatoon costume of your own!