by MaDonna Flowers|August 3, 2015
Categories: Movies, Superheroes, Then and Now 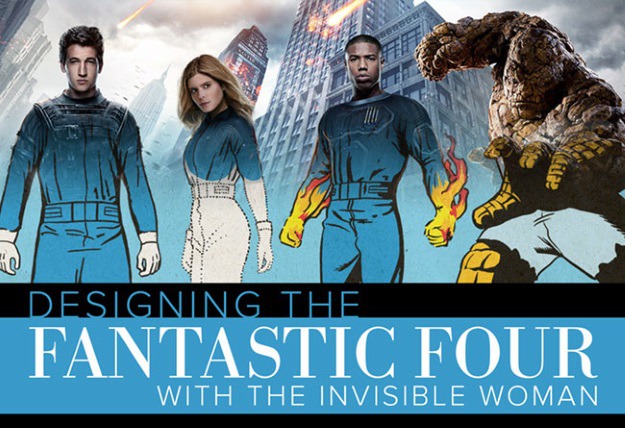 The Fantastic Four has been fighting crime in the Marvel Universe for over 50 years, ever since they first appeared in The Fantastic Four #1, all thanks to the super-duo creative team of Stan Lee and Jack Kirby. Countless comic issues, cartoons, and movies, have all been released since that first appearance, and, as expected, the quartet's costuming has changed quite a few times in these past decades. The newest movie, Fantastic Four, is out this July 2015, so we thought it would be a perfect time to pull together all of the group's looks in one infographic! This image shows 15 of the superheroes' notable outfits, and is narrated by the Invisible Woman herself, Sue Storm. We've also included an interactive slider at the top, so you can compare the Fantastic Four's look from 1961 to the actors from the 2015 film!

Embed the slider on your site.

Designing the Fantastic Four with the Invisible Woman Transcript

Superhero. Regent. Mother. There are many titles that describe Susan Storm-Richards, but one that's frequently overlooked is costume designer.

She may be the Invisible Woman, but she always makes sure her team is dressed to be seen. We caught up with the Fantastic Four co-leader to get some insight into how the team's look has changed over the years.

At first we just fought in our regular clothing, which wasn't really built for wear and tear. I thought we needed some sort of uniform to make us look more like a team. It originally included a full helmet for the Thing, if you can believe it! He wasn't a fan.

This is just the original with a thinner neckband, but we wore it longer than any other design. The black neckband might look a little dated now, but it was cutting edge back then—we did it four years before Star Trek! I briefly tried out a miniskirt version when those were all the rage.

A routine trip to the Negative Zone didn't go quite as planned, forcing us to find an alternate way back home. Somehow this process caused the colors of our costumes to reverse in terms of light and dark. It was a little alarming at first, but I liked the look so much we decided to keep it.

The '90s were a dark time for me. I was still slowly recovering from having been under the influence of... well, I don't like to talk about it. It was a dark time.

After making a full recovery with the help of my son, I switched to something a little less... flashy. I always loved Wanda's—you know, the Scarlet Witch's—opera gloves, though I don't think I wore them as well as she did. I once convinced the team to try on jackets and pouches! We laugh about it now.

We'd worn that plain-looking "4" for so long, I decided to try updating it to something a little more bold and angular. Unfortunately, it ended up being really poor timing; the first time we wore these into battle, we all died! I waited a few years before trying it out again.

I say "we died" but we weren't really dead dead. In reality, we'd been whisked away to a pocket universe, where we relived old adventures as if they were happening for the first time. Our uniforms there were standard S.H.I.E.L.D. issue, with a "4" logo I added at the last minute.

After returning to our home universe, I opted for a variation of our original costume, just because it felt nice to get back to something that felt familiar. The main difference was a larger black shape around the neck that met the logo halfway and a decorative belt buckle.

There weren't my designs, but I enjoyed seeing a Hollywood costume designer take a stab at it. An unreleased film created before this one had just used our standard Negative costume. I know some people have said Jessica Alba was miscast as me, but she was very sweet when I met her.

This wasn't the first animated series based on our lives, but it was the only one that didn't use our real costumes. I'm not sure why they went with red for the logo—maybe they were trying to make us look more like the X-Men? Not that I have anything against the X-Men. They're lovely people.

Right before this one, we'd begun wearing emblems that doubled as communicators. Having a pocket with a cellphone just ruins the clean lines of an outfit, you know? I was the first of us to go with short sleeves, but Reed and Johnny tried them for a while a few years later.

When Johnny died, we retired our old identity and adopted the name Future Foundation. The material of this costume was amazing—it allowed the wearer to modify the preset design with their thoughts! Naturally, we replaced this logo with the classic "4" after Johnny was revived by worm-healers.

Instead of going back to blue, I thought trying a different color would signify a fresh start. I guess sometimes I redesign our costumes out of a sort of ritual, like when a sports fan changes things up when their favorite team is on a losing streak. Unfortunately, it didn't work this time.

The idea with our newest costume was to get back to basics, a sort of rebirth, if you will. Maybe blue is our lucky color after all. That said, I just couldn't resist changing up the logo just a little. We've used circles for so long, I thought why not give squares a try?

I haven't seen the new film yet, but I've heard the black outfits from the posters are just temporary, like the black outfit in Netflix's Daredevil. I'm as excited as anyone to see the final reveal. I haven't met Kate Mara, but speaking of Netflix, I absolutely loved her in House of Cards.

What a ride, huh? That Negative II look from the early 90s... wow! Seems like Sue did NOT want us to remember that one. Are you a fan of the original Fantastic Four costumes? Which was your favorite look? Who is your favorite member, anyway? The Thing? The Human Torch? Is it Mister Fantastic? Is he ANYONE'S favorite? JK, we love you, Reed. Let us know in the comments, though! Also, don't forget to take a peek at our superhero costumes - you need SOMETHING to wear to the midnight release, right?