From the Hill to the Sky: The Evolution of Ant-Man [Infographic] 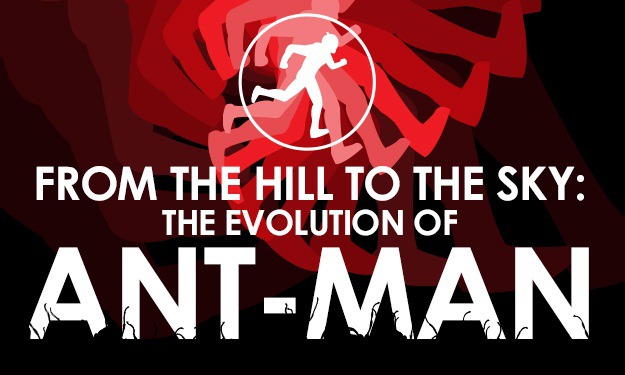 There is a reason comic fans eagerly anticipate that first blurry shot of their favorite character’s costume after a cinematic adaptation is announced. True fans know that almost every comic book character in history has gone through numerous costume changes (except maybe the Hulk—tiny shorts and a bare green chest forever), and every fan wants to see their favorite character’s costume represented accurately on screen. Since comics are illustrated, turning hand-drawn ideas into tangible and realistic on-screen attire can be a challenge. Thankfully, though, it looks like the creative team behind the Ant-Man film has paged thoroughly through comic history and found the right mixture of both old and new for our favorite pin-sized superhero. As you "ant"icipate the film's release next Friday, enjoy reading up on Ant-Man's interesting evolution!

From the Hill to the Sky: The Evolution of Ant-Man Transcript

Fans have responded positively to the recent unveiling of the Ant-Man costume that actor Paul Rudd will don in the Marvel Studios film. Combining elements of many Ant-Man eras with a clean, modern feel (and subtle insect features), this suit is a great example of how to please fans and create a memorable costume. To see where the film found inspiration, check out this infographic featuring various ant-men throughout the years.

Not only could Hank Pym use his size-changing abilities to shrink; he could also grow larger. Giant-Man stomped around the city in a red pumper with blue shorts and a v-shaped design covering the chest.

Never one to be satisfied with a single size, Pym's Goliath was even larger than Giant-Man. His red jumper turned to blue and his shorts became a bright yellow. He also donned a new visored mask which ditched any remaining insect features.

After a period of absence, Pym embraced his identity and rejoined the Avengers. His three stable identities were combined into one suit, featuring the colors of Giant-Man, the insectoid helmet of Ant-Man, and the size of Goliath.

Man in the Ant-Hill (Hank Pym)

After successfully reducing a chair to doll-size, Hank Pym decides to try his size-altering serum on himself. The now thimble-sized Pym finds himself in an ant hill, face to face with the creature that would inspire his heroic namesake. Pym looked the part of a typical scientist here; white lab coat, blue slacks, and brown dress shoes.

Hank Pym didn't make his debut in the Ant-Man suit until Tales to Astonish #35. Featuring the classic red jumper and a metallic helmet, the miniature icon was born. This costume would only be slightly altered in the next five decades.

A controversial character, Yellowjacket was the result of Pym's increasingly troubling mental problems. Pym would infamously slap his wife Janet in this guise, tarnishing his status in the Marvel Universe for years.

The siren call from the West Coast Avengers was too much for Pym, and he returned to the ranks as himself in his normal, super scientist mode. He rocked a sleek orange jumpsuit covered in lots and lots of pockets; as was the style at the time.

In a confusing turn (even by Marvel standards), Pym's wife, Janet, alter-ego "the Wasp", died. In his grief, Pym then took the Wasp identity as his own in tribute. This costume featured realistic insect wings and yellow gauntlets.

An electric expert who became a thief to support his sick daughter, Scott Lang stole Hank Pym's original Ant-Man suit. Impressed by Lang, Pym allowed him to keep the suit if he used it strictly for lawful purposes.

Looking more like a space pilot than an insect-themed superhero, this update to the Ant-Man suit was not well-received. It featured the traditional red and black jumpsuit but hides Lang's face behind a crystalline helmet.

Recruited by Reed Richards, Lang teamed up with She-Hulk, Medusa, and Miss Thing to form a new Fantastic Four. He donned a "4" -emblazoned red and black jumpsuit and a silver ant helmet with pincers. The antennae on his helmet were not solid, but appeared to move and shift at will.

The recently rebooted Ant-Man is still going strong, bringing in new fans and pleasing old ones. His current costume is a bright, streamlined update that features a helmet closer to the original silver design, now with red eyes.

With a few tweaks for realism, the film version of the Scott Lang Ant-Man costume is fairly faithful to the original Pym suit from the comics. It features the classic black and red colors with a few added flashing lights and high-tech gizmos. The ant-like features of the suit are subtle, with more practical antennae on an insectoid helmet.

Looking less like a costume and more like a full-body ant mech, Eric O'Grady's suit was a stolen prototype used for his own less-than-heroic deeds. Labeled "The Irredeemable Ant-Man", O'Grady's story was originally played for laughs, but he eventually buttoned-up and flew straight when recruited into the Avengers initiative.

After O'Grady was killed by androids, a life model decoy was made with all of his memories. The only problem was that it was evil. And it wanted to destroy the Secret Avengers. Black Ant's costume featured a reversed Ant-Man color scheme of black and red, with highlights and some seriously menacing eyes.

What is your favorite Ant-Man costume? Do you think Giant-Man or Goliath will appear in the film? Let us know in the comments below! (We're guessing they're being saved for the sequel.) Not that you ever need a reason to wear a costume, but movie releases are a great excuse to dress up as Ant-Man or any of your favorite superheroes! Check out our huge selection of superhero costumes as well as our officially licensed child ant man costume that will help any already tiny tot fit into the smallest of spaces.