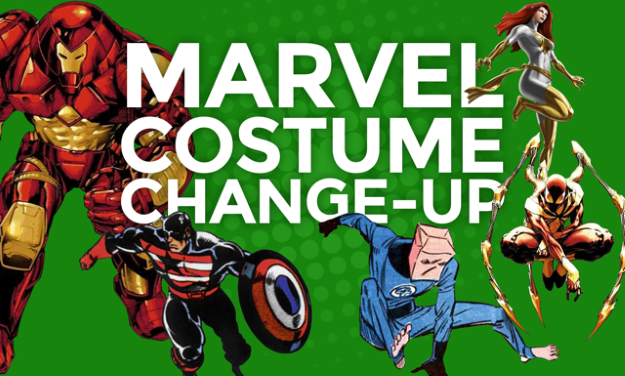 Most people can’t fly, can't shoot lasers from their eyes, and don't have suits of high-tech armor that allow them to save the world from criminals and supervillians. BUT, tie a towel around your neck, place your hands on your hips, and see if you don’t feel heroic! Superheroes are as much about what they wear as they are about what they can do. While most superheroes keep the same look issue after issue, movie after movie, sometimes even they change it up a bit. Next time you think about costuming up to head to your favorite con or just to play pretend, conside these awesome alternative costumes to the classic superhero looks you know and love from the Marvel Universe.

Here’s a guy who knows how to dress; his costume IS what makes him super. As of Avengers 2: Age of Ultron, Tony Stark will be on Mark 43 of his iconic Iron Man armor sets. 43. That’s right, he has built 43 costume variations of the Iron Man suit. In comics, he has even MORE variations. Here are a few of our favorites. 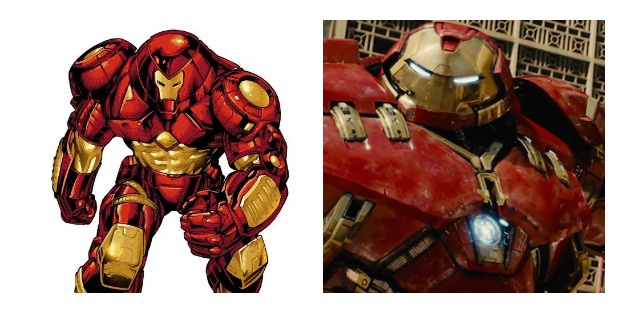 For when you need to bust Hulks. Tony developed this specifically to battle The Hulk. 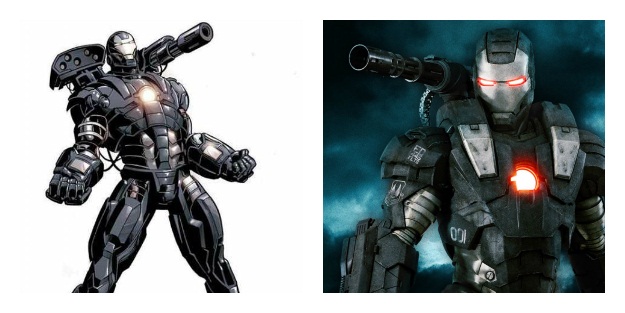 How do you make the Iron Man armor more awesome? Give it a chain gun, rocket launcher, and throw some extra BOOM on it. 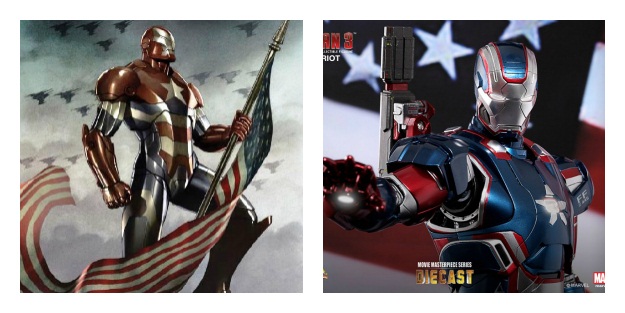 Did somebody order freedom? Because we got your freedom right here.

For one reason or another, Spidey has a ridiculous amount of costumes. There are so many variants of Spider-Man in the comics that they even created a mash-up comic called “The Spider-Verse.” From clones, imposters, or just plain new costumes, here’s how to bump up your Spider-Game. 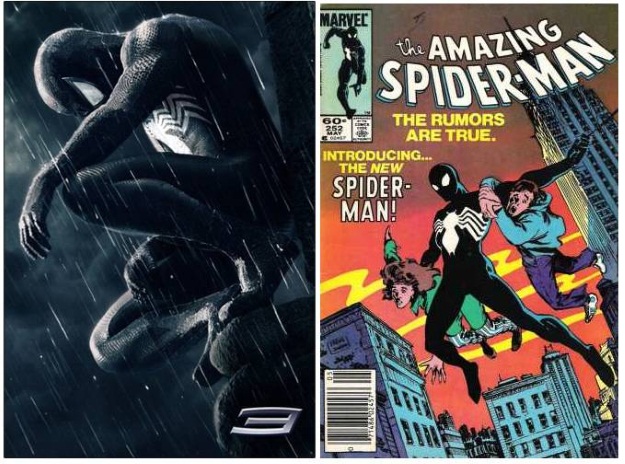 Warning: May cause horrible sequels and bouts of bad emo hair (lookin' at you, Tobey Maguire). The alien suit made Spider-Man even more awesome in black. 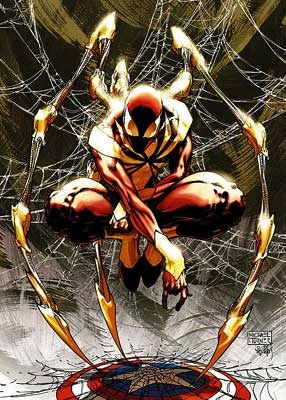 Spider-Man tested, Stark approved. Tony built this costume to augment his powers during the “Civil War” story arc. It comes with three extra arms and a bunch of fun Stark-tech. 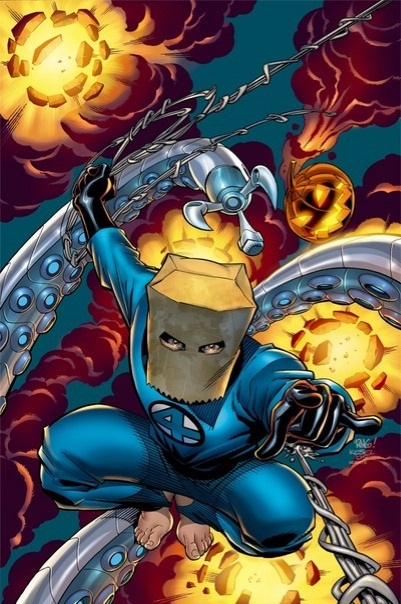 When Reid Richards of the Fantastic Four separated the Black Suit from Spider-Man, Spidey was left costume-less and mask-less. In order to get home (and fight some crime on the way), he became “The Bombtastic Bag-Man.”

The Merc with a Mouth, Deadpool, is a comic fan-favorite. He is known for his ability to break the "fourth wall" and address readers directly. He knows he is a comic book character, which makes for some pretty zany moments. Thus, this crazy and off-the-wall humor naturally leads to some interesting costume moments. 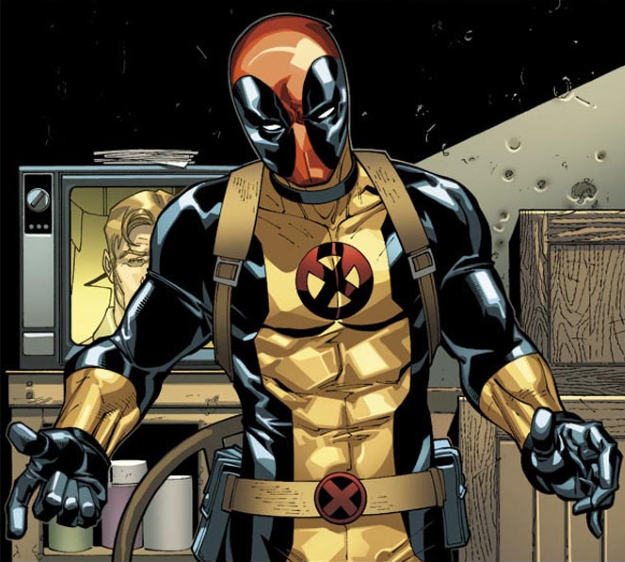 After begging and pleading (which actually consisted of Deadpool following the X-Men on missions), Deadpool was allowed to join the famous X-Men team. This is his take on the classic blue and gold costume combo — notice the out of place Deadpool mask. 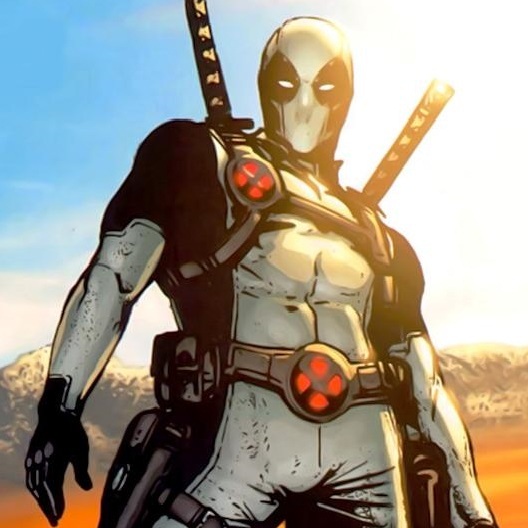 Deadpool’s best friend is Wolverine. Wolverine had a black ops team called X-Force. Deadpool went with on missions in this stealthy costume. Wolverine LOVED it. (Not.) 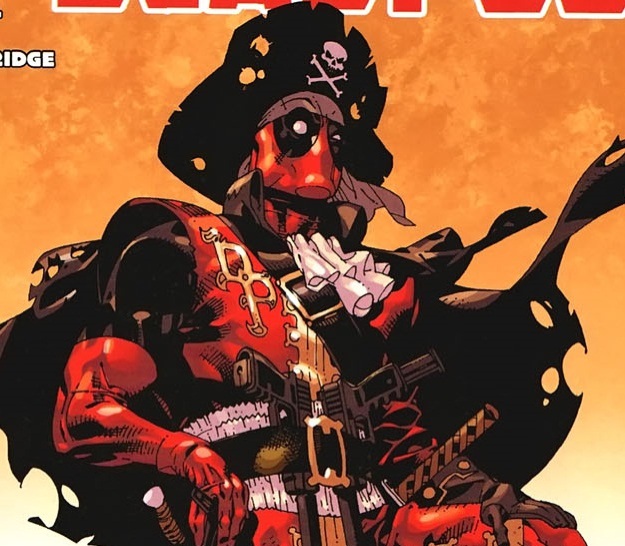 What’s better than sailing the seven seas and hunting for booty? While we’re not sure we’d trust Deadpool at the helm of a ship, we’re pretty sure he’d hunt for booty like a pro in this pirate outfit. Piratepool loves treasure.

One of the original members of the X-Men, Jean Grey has had a turbulent history. As the avatar of The Phoenix Force (to spare you the comic book mumbo jumbo, let’s just say she’s got a fiery temper), her look has changed a lot, from her first days as Marvel Girl to her more modern look as The Phoenix. 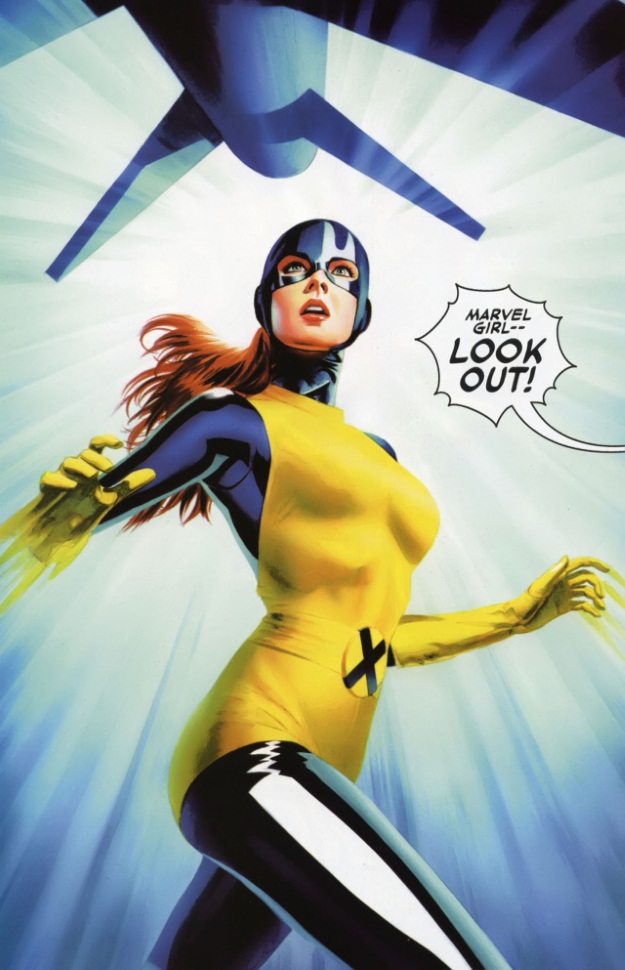 many folks may not remember Jean’s first appearace as Marvel Girl, which was in the original X-men: Cyclops, Beast, Angel, Iceman, and Marvel Girl. They wore identical outfits. Not exactly the most jaw-dropping costume in Marvel history. 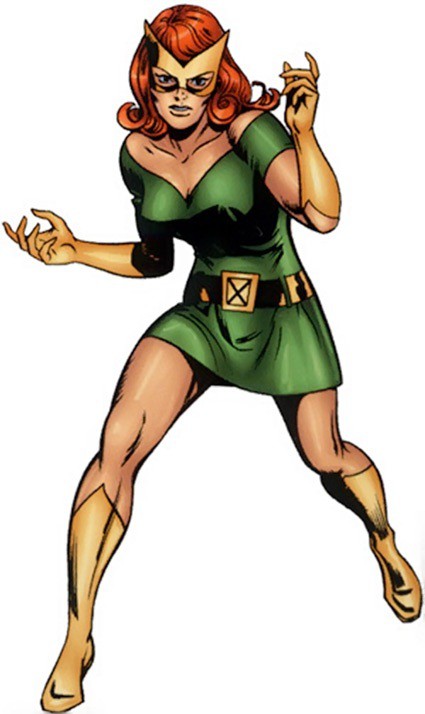 In “The All-New X-Men,” the heroes were given their own looks in addition to new teammates. Jean takes on this feminine look in green and gold, which would go on to become her signature colors. 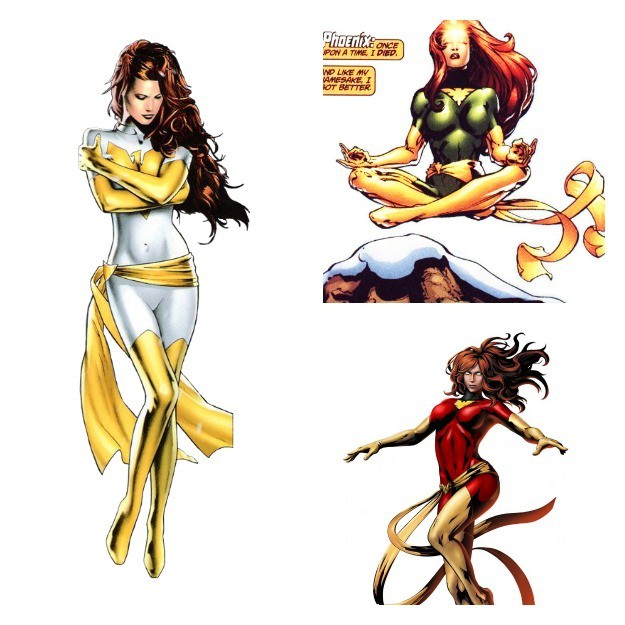 Jean eventually becomes possessed by an entity known as The Phoenix Force, vastly increasing her powers and her awesomeness. While possessed, her outfit changes according to her mental state. When she’s evil, she’s Dark Phoenix in red. When she’s good, she’s rocking either green or white. Whatever the case, this is one awesome look for this X-Woman.

The First Avenger, the ol' Stars 'n' Stripes: Captain America, one of the most iconic characters in the Marvel Universe. His winged mask, the shield, and the red, white, and blue color scheme are classics. Throughout his long service as superhero and leader, Steve Rogers has adopted a few different looks. 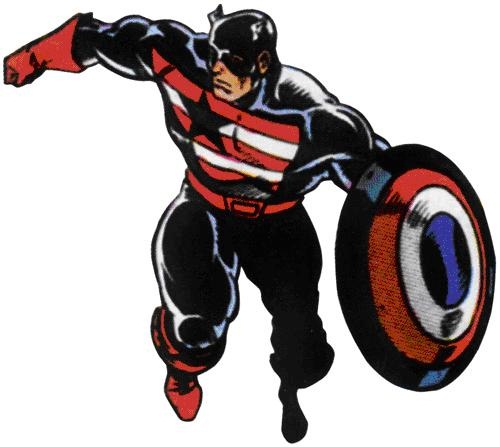 Steve gives up the mantle of Captain America for a time and retires. Falcon and some other buddies find him and talk him into taking up the shield again, this time as "The Captain." The costume features less blue, more black, and is still based on the orginal Captain America costume. 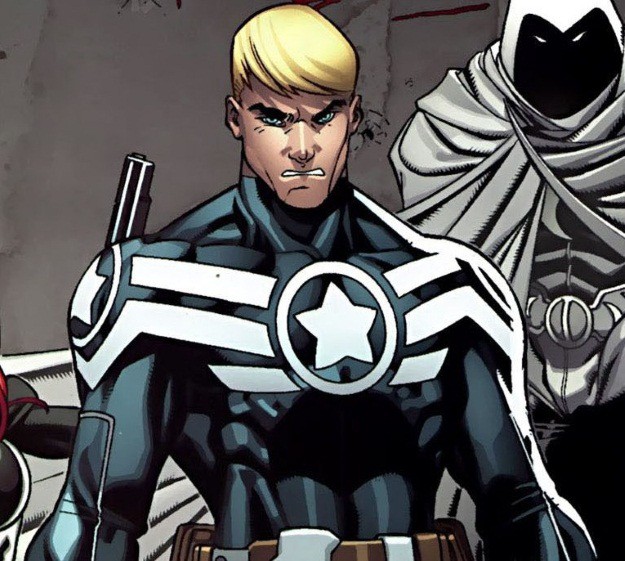 After the comic event "Siege," Rogers passes the mantle of Captain America to Bucky. He becomes the Director of SHIELD and dresses in this Captain America/SHIELD mashup costume. His iconic shield is replaced with a piece of Stark tech that gives the accessory a holographic look. 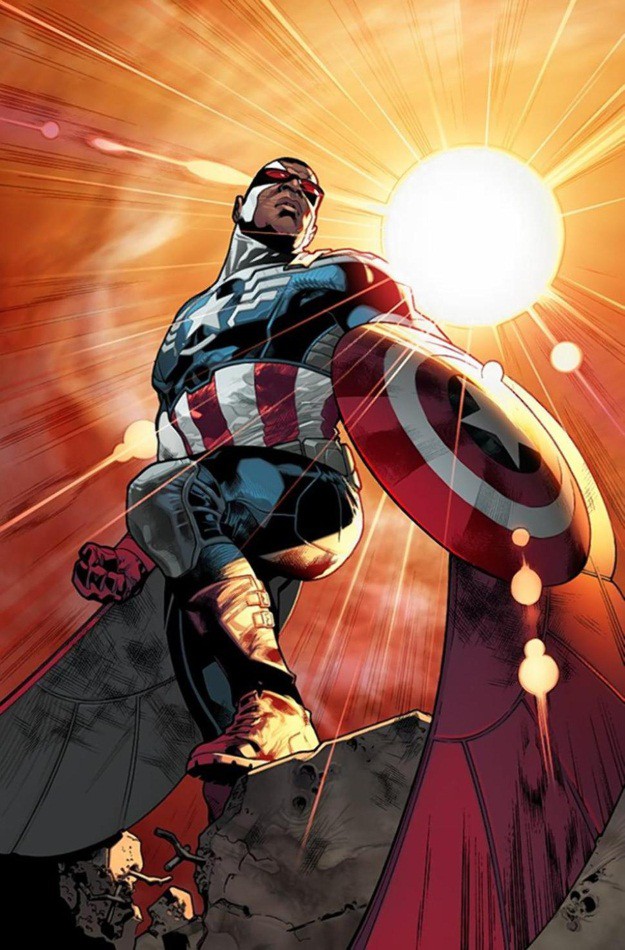 In the current stories, Steve Rogers had the Super Solider Serum drained from his body. He has since passed the mantle to The Falcon, Sam Wilson, who has become the All-New Captain America. This unique costume combines elements of both The Falcon and Cap, logically.

WHEW! That was a lot of costumes. Did you see anything you like? Learn anything while you were at it? Do you have an alternate costume that you consider to be your favorite? Comment below! To take a look at the classic classics, here are our superhero costumes.