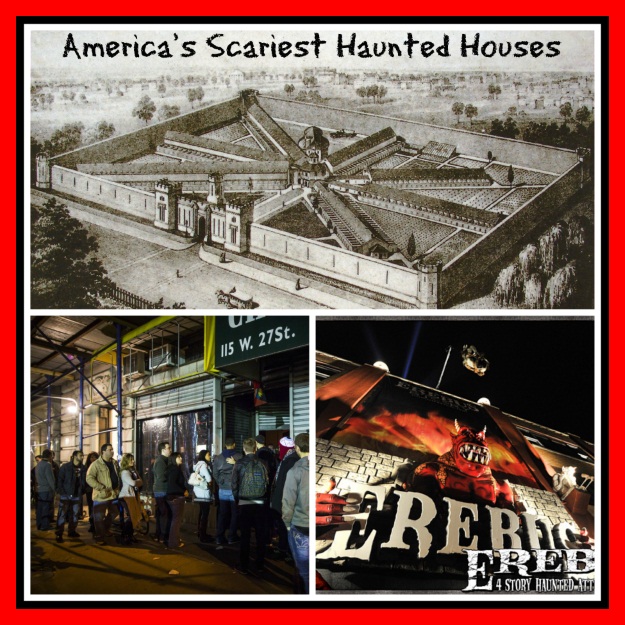 There is just something so satisfying about being scared out of your skin on Halloween. Americans, in particular, go to great lengths to get their scare on during the Halloween Season. That in mind, we've rounded up ten of the best, scariest, and most bizarre haunted attractions in the United States. Here they are, in no particular order. Enter at your own risk!

Eastern State Penitentiary is considered to be one of - if not the - definitive haunted attractions in the United States. The former prison, which housed notorious inmates such as Al Capone, is one of the most studied ‘active’ haunted sites in America. The prison has been featured on a number of paranormal investigation shows including Ghost Adventures, Most Haunted LIVE, FEAR, and Ghost Hunters, who did a 5 part series in the prison. “Terror Behind the Walls” is one of the largest haunted attractions in the industry, according to the Haunted Attraction Association.

EREBUS held the record for “Largest Walk-Through Haunted Attraction” from 2005 to 2009, and it is still an experience to be reckoned with. The attractions and events change from year to year, but the overall theme stays the same, with a maniacal scientist sending patrons back through different time periods and causing all sorts of temporal mayhem. The 100,000 square foot facility uses 70,000 square feet as a workshop and a four-floored 30,000 square foot space to spook, scare, and frighten guests. Props, puppets, animatronics, and actors all play their roles in making EREBUS one of the best Halloween Attractions in the nation.

Situated in the heart of Fort Worth, Texas, Cutting Edge is the haunted house responsible for EREBUS losing its Largest Haunted House title from the Guinness Book of World Records. Whereas EREBUS takes 40 minutes to walk through, The Cutting Edge takes a whopping HOUR to get through—and that’s not including the spooky attractions outside the compound itself. The Cutting Edge is built upon a historical section of Fort Worth maniacally dubbed “Hell’s Half Acre,” the old meat processing district in Fort Worth.

Ever watched Ghost Hunters or Ghost Adventures and thought to yourself, “I could do that?” Then this is the place for you. The residence was the sight of a grisly murder on June 9th, 1912—Josiah & Sarah Moore, their four children, and two guests Ina & Lena Stillinger were murdered with ax-blows to the head. Though an investigation was conducted and many suspects tried, the murder was never solved. Visitors who are of the more skittish variety may visit the house during the day for tours. Those with greater fortitude for such horrifying places can choose to stay in the house overnight with up to 9 guests.

This isn’t your daddy’s haunted house. Part art house, part S&M parlor, part freak show, Blackout is less a haunted house and more of a psychological thriller experience. The only real way to describe what you MAY experience within the walls of Blackout is to read the rules. The scenes portrayed by the actors change every year, but each new season brings about a new plethora of physical and psychological thrills that would cause even the most hardened of Haunted House hunters to cringe.

One of the longest-running attractions in the nation, and one of the most critically acclaimed, Netherworld is an independently owned and operated Haunted House in Atlanta, GA. Netherworld has been featured on television numerous times over the last 17 years as one of the best Haunted Houses in the nation. Placements include spots on CBS’ The Early Show, NBC’s Today Show, and various Travel Channel Specials.  Netherworld houses some of the nation’s most advanced animatronics, and some of the best actors and make-up artists in the horror world. Each year starting in 1997, Netherworld puts together a new theme or two to scare up their visitors so no two visits will ever be the same!

Situated in the heart of Voodoo Country, The 13th Gate & Necropolis is one of the most consistently recognized "top Haunted Attractions" in the Nation. The 13th Gate features both indoor and outdoor attractions, including a crawl-through crematory oven, a ride in an old hearse, and a rickety bridge over a pit of live snakes.  Part of the 13th Gate's success is its offering of offseason activities. When they aren't scaring the pants off their patrons, they operate as a full Movie production company, creating sets, props, and other special effects for television and movies. The Necropolis 13 is unlike anything else on this list. It is a city-block-wide Lousiana style graveyard, crawling with zombies. The entrance? An open grave that leads down 13 more steps into haunted catacombs. From there it's a half-mile trek to the exit.

A lesson in horror from the master himself, Rob Zombie's Great American Nightmare features three attractions, each promising a different set of scares. "Captain Spaulding's Clown School" brings the brave through the mind of the titular Spaulding, reminiscent of House of 1000 Corpses. "The Devil's Rejects - inspired by the film - stars the Firefly Family, a group of backwoods folk wanted for over 75 disappearances and homicides. Guests get to join the state troopers in their hunt to bring these psychopaths to justice. Finally, in the last attraction of the Rob Zombie haunted house, patrons will be asked to enter the "Lords of Salem" total blackout attraction. Based on Zombie's indie horror film of the same name, patrons have their senses limited as they face total darkness, claustrophobia, and fear of the unknown.

Pennhurst Asylum is one of the most visited sites in America when it comes to paranormal activity. Started in 1908 as the "Eastern Pennsylvania State Institution for the Feeble-Minded and Epileptic," Pennhurst now houses one of the scariest attractions in America. Three distinct attractions make up Pennhurst: The Dungeon of Lost Souls (a maze of old cells and hallways with a series of human experiments that have gone wrong), The Tunnel of Terror (a 900 foot walk through the underground of the old State Scool, recently upgraded with new scares and amazing catacombs), and "Ghost Hunt," which is located in the Mayflower Building. The Mayflower Building is reportedly one of the most active paranormal locations on the entire campus.

One of the most decorated Haunted Houses on our list, the House of Torment in Austin, Texas is actually three different events compiled into one. One event changes completely yearly, and the other two keep the same overall theme. in 2014, the first event has become "Blackthorne District Realms Collide," a mixture of insane asylum and horror monster themes. The other two events are "Cursed," which has explores demonic themes, and "Slaughterhouse," which follows a hillbilly horror theme.

Which, if any, of these haunted attractions would you dare to enter?? Have you already been scared silly by any of these haunts?? Tell us in the comments below!