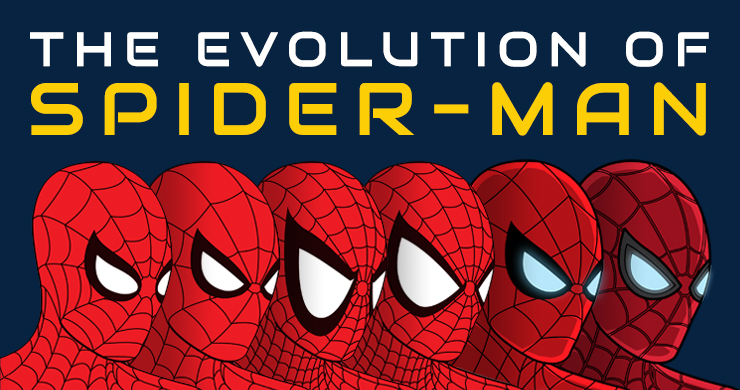 "Spider-Man, Spider-Man, does whatever a spider can." Boy...that song is almost as iconic as Spider-Man himself! Even though the classic red suit with black webbing detail is the most recognizable of Spidey's looks, the costume has seen some interesting alterations throughout the years. Join us as we untangle the web of Spider-Man's changing fashions. From the Spider's evolution in print, to the suit's changes on film, we cover all Spiderman's major costumes!

Spider-Man has worn so many different costumes, yet most of them only lasted for a single storyline. The wide variety of one-off outfits often distracts from the slightly more subtle changes Peter Parker’s regular costume has gone through, so let’s take a deeper look.

Spider-Man was first drawn by Jack Kirby, co-creator of the Avengers, the X-Men, and the Fantastic Four. Employees recall Kirby’s Spider-Man looking quite different, wearing a Captain America-style half-mask and shooting webbing from a gun. Sadly, these initial drawings are believed to be lost.

The debut story was redrawn by Steve Ditko, who also redesigned the costume. He gave Spider-Man his iconic full-face mask with large white eyes and the intricate webbing pattern all over his costume. He also replaced the web gun with web shooters, and added wing-like webs under his arms.

The blue area of Spider-Man’s costume was intended to be black (with highlights colored in blue). Ditko stopped filling in the black during the end of his run, and new series artist John Romita, Sr. followed suit. Romita also tweaked the eyes and web pattern and eventually dropped the underarm webbings.

In 1982, a fan named Randy Schueller wrote to Marvel with an idea for a black Spider-Man costume. Surprisingly, editor Jim Shooter loved it and even compensated him for it. The design was fleshed out by artists Mike Zeck and Rick Leonardi, and the red spider on his chest was changed to white.

When Spider-Man returned to his old costume, rising star Todd McFarlane took a few liberties with the design. He revived Ditko’s underarm webbing and filled the blue with black, but made the web pattern even more dense than Ditko had, while dramatically increasing the size of the eyes.

A long dead clone of Peter Parker unexpectedly returned. Although he had all of Peter Parker’s memories, he now went by the name Ben Reilly and took up the mantle of the Scarlet Spider. The sleeveless sweatshirt ensemble was designed by Tom Lyle to look like an “off-the-rack non-costume.”

In a surprise twist, it turned out Ben Reilly was the real Peter Parker, and Peter was the clone! Ben took over as the one true Spider-Man, until the editors realized they’d made a mistake and retconned him back to clone status. Ben’s costume design by Mark Bagley was a mix of new and old.

During this period, the size of Spidey’s eyes and the density of his web pattern varied from artist to artist, depending on whether they had a preference for McFarlane or Romita. Mark Bagley’s Ultimate Spider-Man is definitive of the era, having large eyes and relatively open blue sections.

Doc Ock switched bodies with Peter Parker and allowed his body to die (with Peter in it). He then became obsessed with proving he could be a superior Spider-Man. Humberto Ramos based his design on a rejected Spider-Man movie costume by Alex Ross, adding an erratic web pattern.

As part of Marvel’s “All-New, All-Different” promotion, Peter Parker created a new high-tech costume. Alex Ross went back to the Romita look, but tweaked the web pattern and made it an armor-like material. He was also given glowing eyes, a glowing spider emblem, and glowing underarm webs.

Spider-Man Costumes In the Movies

Award-winning designer James Acheson worked on all three Spider-Man films. He made the eyes smaller like the classic Romita look, but more triangle than watermelon-shaped. To add dimension, the suit was given a scale-like texture with a raised web pattern laid on top.

As in the comics, the alien symbiote becomes Spider-Man’s new costume before later transforming into Venom. However, unlike the comics, the movie costume is just a black version of his regular costume, retaining the raised web pattern. The spider emblem also changed to look more threatening.

Designer Kym Barrett was given the unenviable task of making the reboot suit look “different, but not too different; the same but not the same.” The result was a costume that looks similar to previous movies, but also contains hints of Bagley’s “Spectacular” design and other obscure outfits.

Director Marc Webb wanted to go with a more classic look, requesting for the eyes to be larger similar to “Ultimate.” Thanks to the bright white lenses, the costume looked more faithful to the comics than any previous movie up to that point. Sadly, the film was a critical disappointment.

Marvel wanted an even more faithful costume, and worked with designer Judianna Makovsky to achieve this vision. The suit is high-tech similar to the current comics, but the glowing eyes have been replaced with eyes that are expressive, changing size between Bagley- and Romita-style eyes.

In Spider-Man: Homecoming, Tony Stark took back the high-tech costume, forcing Peter Parker to cobble together an “off-the-rack non-costume” in response. Designer Louise Frogley hasn’t yet spoken about the design, but the sleeveless hoodie in particular seems like a nod to Scarlet Spider.

Tony Stark gave Peter Parker a new nanotech suit at the end of Homecoming, which became the standard Spider-Man suit for the next several films. The Ryan Meinerding design is red and navy with gold accents, an homage to classic Romita elements and the comic book Iron Spider.

In the comics, Miles Morales wears a red-and-black version of the classic Spider-Man suit designed by Sara Pichelli. The animated film incorporated this overall design but altered the chest stripe and swapped the traditional logo for a spray-painted graffiti spider.

The trailers for Spider-Man: Far From Home show Spider-Man wearing a variety of new suits, including his earlier Stark design and a gliding red-and-black suit. Peter Parker also wears an all-black stealth suit which is likely an homage to S.H.I.E.L.D. and Spider-Man Noir designs in the comics.

Which Spider-Man costume was your favorite? Are you a fan of the early Ditko costume, the “classic” John Romita Sr. suit, or a different design entirely? Let us know in the comments! And if you’re a Spider-fan yourself, take a look at all the Spider-Man costumes we carry!