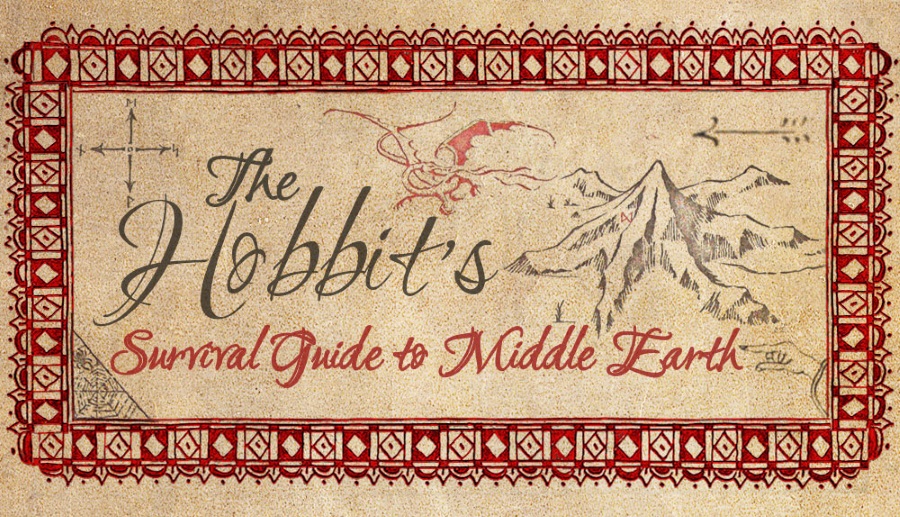 The Hobbit by J.R.R. Tolkien is one of the most adored books in modern history. Its chief character, the hobbit Bilbo Baggins is a fish out of water on his adventure in the wider world of Middle Earth. The Desolation of Smaug, the second part of Peter Jackson's film adaptation of the book, lands in theaters this December and this Hobbit's Survival Guide infographic will recap everything you need to know going into the movie. Look at the choice gear & and equipment for a hobbit, combat & defense strategies, a rundown of a hobbit's companions & allies, and some wise words from our favorite wizard.

Being simple and gentle folk from the land of The Shire, hobbits are content tending to their gardens and enjoying a good day's meal. Only the odd few stray beyond their own borders and explore other realms in Middle Earth. When they do venture into the wild, hobbits must rely on their sensibilities, wit, a little trademark luck and proper gear for an adventure.

In the first draft of The Hobbit, Bilbo Baggins wore shoes. Author J.R.R. Tolkien initially thought the hobbits' feet would not be able to handle the difficulty and thus, Bilbo had the elves at Rivendell fashion him a pair of boots to wear on the rest of his journey. Tolkien later abandoned the idea and gave hobbits leathery soled feet. Bilbo can be seen wearing boots in many illustrations of Tolkien's illustrations for The Hobbit.

Stalling for time is a crafty tactic for hobbits to employ against the dim-witted creatures of Middle Earth.

For an opponent not interested in talk, flail a sword forward until the foe impales itself on the blade.

Flattery is a valuable asset to a hobbit contending with more intelligent creatures. Inflate the ego of your adversary before making your escape.

Saruman believes it is only great power that can hold evil in check, but that is not what I have found. I found it is the small everyday deeds of ordinary folk that keep the darkness at bay. Small acts of kindness and love. Why Bilbo Baggins? I don't know. Perhaps I am afraid, and he gives me courage.

Travis is a videographer, t-shirt aficionado and seasoned costume guru. He also boasts expert knowledge of all things Doctor Who and Lord of the Rings related. He can usually be found drenched in fake blood at a zombie pub crawl, taking brewery tours wearing German lederhosen, or guising as a Jack Sparrow impersonator-- convincing people to buy him a drink of rum.