It has been nearly 35 years since Michael Myers made his first movie appearance, but the “Halloween” franchise, including costumes and masks, are as popular as ever. Trick or Treat Studios, a California-based company, specializes in creating authentic Halloween masks. The studio’s newest release is the first truly authentic replica “Halloween II” Michael Myers mask. Chris Zephro, Founder and Owner of Trick or Treat Studios, was kind enough to answer a few questions for us; he managed to cover everything from his hatred for corporate America to his trip to Morocco to source camel hair for the Halloween mask. 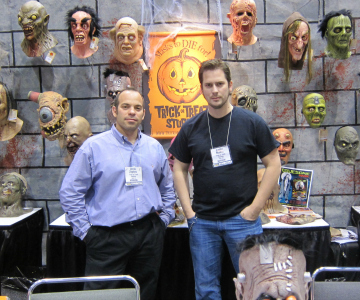 What made you want to work with masks?

I've always like masks ever since I was a kid, especially monster masks.  It's a lot of fun to put on a mask and pretend to be something else.

Why did you decide to start Trick or Treat studios?

Frankly, I hated my job in corporate America.  I was really tired of fighting everyday to try and convince upper management to take any sort of risk of accepting new ideas that I knew would improve the company.  Over time, I just got burned out.  When I earned my MBA one of my two majors was Entrepreneurial Studies.  Deep down I always wanted to start my own company, so when the opportunity came, Trick or Treat Studios was born.  At the time I was very disenchanted with the mask industry.  All of my favorite companies either went out of business or moved all their production to China.  The quality and design integrity really went downhill, so I saw an opportunity to bring back the look and feel of masks that I loved as a kid.  It has taken a little bit of time to educate retailers that in the end customers will pay a few dollars more for a quality mask.  It's nice to see that beginning to happen.

What do you love about working in this industry?

It keeps me young and given that Halloween is my favorite holiday, it allows me to have that around me every day.

What is your favorite Trick or Treat Studios mask?

Of course I love them all, or else they wouldn't be in the line. If you forced me to pick one, I have to say Shock because it embodies the reason we started the company.

What is your favorite mask of all time?

The conversion of the 1975 Captain Kirk mask to Michael Myers. 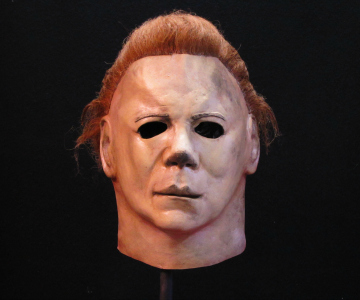 What is the history behind the “Halloween II” mask?

For the original film, the producers purchased a 1975 William Shatner mask and an Emmet Kelly Clown mask.  Everyone agreed the clown was scary, but the when they tore the side burns and eyebrows off the Shatner mask, cut out the eyes, and spray painted the hair and mask, an icon was born.  That mask was used to film “Halloween I.”  After production wrapped the mask spent a number of years in a shoe box under the Producer, Debra Hill's bed.  Debra was a heavy smoker and when they decided to shoot “Halloween II,” the original mask was used again, but this time it was starting rot and turn yellow.  In addition, a lot of the white paint came off exposing the flesh color from the Shatner underneath.

Were you able to use one of the original movie masks to create the design, or did you have to go by movie stills?

No, the original mask is long rotted away; our mask is 100% an original sculpture.  We received some excellent screen captures from Universal Studios, plus Justin and I have an amazing collection of behind the scenes pictures we've collected over the years, and of course there is the Blu-Ray disc.  Also, Justin and I know that mask inside and out, in fact, as a kid I actually wore and played with the "Hero" mask.  My father, who was General Manager of Paramount Pictures at the time was really good friends with the Producer Irwin Yablans and he had the mask at his house after shooting on “Halloween II” wrapped.

What was the process of creating the mask?

From the reference pictures, Justin created the mask from Clay.  Once the sculpture was approved by Justin and I, it was molded and castings were pulled.  From there, Justin did a paint master.  The master was then sent to Universal Studios for approval and once we received the thumbs up from them, we started making tooling to develop all of the molds.  Since each mold can produce 20 castings and then those are casting are painted and haired; it is a very labor intensive process. In fact, the entire mask is 100% handmade, which is why I call them little pieces of art. 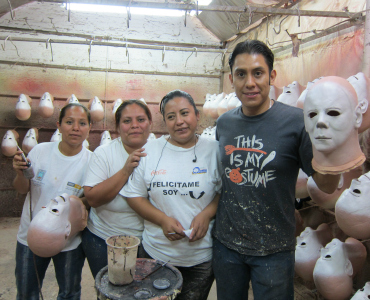 What challenges did you face during the creation of the mask?

Only the biggest challenge that we ever had as a company.  We had made over 8,000 masks and they were ready to go, but we had run out of Camel hair.  We mentioned this to our procurement person and she said “no problem, we can use the fur hair that was on the Paper Magic Michael Myers mask right?”  The head of our production and I sank to the floor.  The mask would look horrible with fur hair and it wouldn’t match the hair that was used on the Hero mask.  It turns out that the Chinese government ordered the only miller on Earth to stop milling camel hair and move to a new fiber, hence a worldwide shortage.  We tried every supplier on the planet, and came up short, so off to Morocco we went to walk the streets and find 6,000 pounds of hair!  Once the goal was accomplished, we took the raw hair to Canada to a miller (we were very lucky to find).  And, back to the factory it went.  This caused us a two month delay in getting these masks out to customers, but I felt that having the mask correct was more important than having it on time.

What features make this mask an authentic replica to the movie mask and what sets this mask apart from others in the movie franchise?

We didn't miss a beat on this mask.  Everything that is in the Hero mask is on this mask including the glue line, the rot simulation, the needle hole in the neck, the Camel hair, the drooping lip, the flesh color and the exact weathering.  It is literally the most screen accurate Halloween mask ever officially licensed and available to the public. It looks like it came right off the head of our favorite psychopath.  Not to mention the quality is first rate. 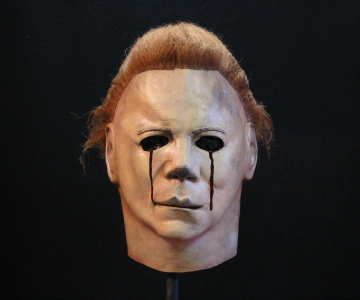 If you could make a mask from any movie, what would it be and why?

“Halloween II” was my dream, so it came true.  It is hands down my favorite film from the franchise and it is the coolest look of the mask.  But, if I get to shoot for another dream to come through, I’d go for Freddy and Jason since none of the replicas have done any justice to the films, but I doubt New Line will ever let those go from my unnamed competitor.

What is your next movie mask endeavor?

More like endeavors.  We just signed deals to do Gunther from “The Funhouse,” the Aliens from “They Live,” “Darkman,” Dark Knight of “The Scarecrow,” and an unnamed upcoming blockbuster with a $150M budget.

You can find the authentic Trick or Treat Studios "Halloween II" mask on our Michael Myers category page here.