Arrrr, pirates! Romantic, dashing, full of eyeliner and dreadlocks, they have entertained us for so long we tend to forget who the real pirates were. There's more of a chance you'll know the name Jack Sparrow over Edward Teach, or Captain Hook over Christopher Newport. Even hearing the name Dread Pirate Roberts will have you bellowing "You killed my father ... prepare to die!" before you think about Bartholomew Roberts.

Since pirate garb is a time-honored costume theme for Halloween, it's time to cheer for the real pirates behind the dashing Hollywood characters. So break out the rum, host a pirate theme party, and let's celebrate by counting down seven famous pirates created by Hollywood, and a matching real-life pirate.

One of the original pirate characters in literature, Captain Hook is immortalized in Disney as the buffoonish enemy of Peter Pan. Foppish in his wide-rimmed feathered hat, all lace and knee breeches, Hook is more a spoiled brat grown up than a wicked pirate. In the original play by J.M. Barrie, Hook is a bloodthirty-though-handsome man, dressed as a nobleman imitating the likes of King Charles II, and is both intelligent and bookish.

Though there is no inspirational pirate that created Captain Hook, some historians have pointed to Christopher Newport, a seaman and captain of one of the ships to found Jamestown, the first permanent English settlement in the New World. For 20 years he raided Spanish shipping, and presented the English King James I with baby crocodiles. Of course, he also lost a hand in a battle, and replaced it with ... yup, a hook! 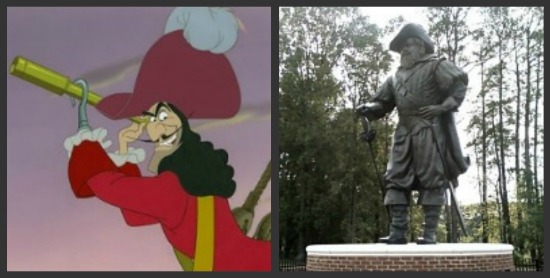 The dashing, swashbuckling pirate archetype we know of today is due to the actor Errol Flynn, who played many Hollywood pirates. Captain Blood was his first, and arguably best pirate film, about a doctor of the same name who is charged with treason and sold into slavery, then purchased in Jamaica by the beautiful daughter of a military commander. During a Spanish raid, he and his fellow slaves escape and begin a daring, adventurous life of piracy.

His real life counterpart was Henry Pitman, a young doctor who happened to be at the site of a rebellion against King James II in 1685. Though he took no side in the failed revolt, he tended to the wounded rebels, being closest to their position, and for his efforts was imprisoned and sold into slavery.

Bitter and seeking vengeance, he worked the plantations on Barbados, until he escaped and was shipwrecked on a deserted island (interestingly, this part of the story became the inspiration for another character – Robinson Crusoe!) Picked up by pirates, but not engaging in piracy himself, Pitman eventually reached New York, then back to Europe, where he received a full pardon. 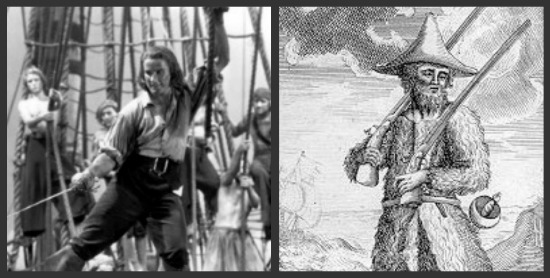 Anybody who has watched the cult-classic The Princess Bride knows all about The Dread Pirate Roberts, the most feared pirate in the world, known for ruthlessly killing all his captives. Westley, the main character of the movie, is rumoured to have been one such captive.

Years pass and he returns, alive, and reveals himself to be the Dread Pirate Roberts. It turns out that the real Roberts had retired long ago, and the name is passed down, since it is the name that inspires fear and dread. As Westley points out, "No one would surrender to the Dread Pirate Westley!" He passes the title to Inigo Montoya ("... you killed my father ...") at the end of the movie.

The writer, William Goldman, pays homage to the Welsh pirate Black Bart (Bartholomew Roberts), one of the most feared pirates in his day. His life of piracy began when a merchant ship he worked on was captured by a Welsh pirate. As he and the pirate captain could both speak Welsh, they formed a friendship, and Bartholomew was quickly convinced of the allure and adventure of a swashbuckler.

After the captain was killed in battle, Black Bart was voted captain, and between 1719 and 1722 he captured over 470 ships all over the Atlantic. He plundered so much gold and goods that trade between Europe and the Americas ground to a halt, and he defeated so many military naval ships he was thought invincible.

His death, in a massive battle between the pirate's forces and the Royal Navy, was so momentous it was seen as the end of the golden age of piracy. 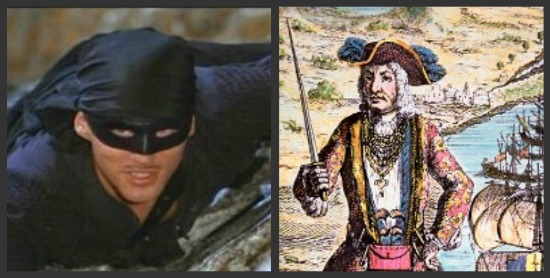 Similar to Errol Flynn, Douglas Fairbanks is the other swashbuckling actor of the golden age of cinema, and The Black Pirate, released in 1926, is his masterpiece. A blockbuster of it's time, this exciting movie has Fairbanks as a nobleman who loses his father and his crew to pirates. Pretending to join them, he secretly plots revenge, and the exciting finale includes some of the most memorable fight scenes in cinema history, such as Fairbanks riding down a sail using a dagger.

Though The Black Pirate doesn't pay tribute to any particular pirate, a nod must go to Sir Henry Morgan, the most famous of all Caribbean pirates. His exploits helped usher in the golden age of piracy. A Welsh noble, Morgan repeatedly raided the Spanish main from 1655 through 1670, sacking dozens of settlements, including the granddaddy of them all, Panama City (he ransacked it so thoroughly the city had to be rebuilt a few miles away.) His exploits brought the Spanish empire to its knees, changing the power dynamics of the New World forever.

Sensing the change in popular support and political winds later in his career, he became a pirate hunter, was knighted for the sack of Panama and became lieutenant governor of Jamaica. 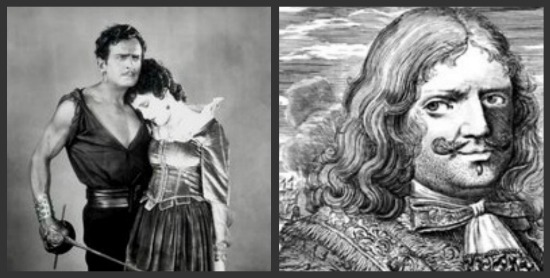 Morgan who? That's okay, Geena Davis stared as this pirate in the dud Cutthroat Island and hasn't been seen since (Hollywood had her walk the plank, I guess.) However, her character was inspired by the wild cat Anne Bonny,  which introduces us to one of the most colorful of characters in Caribbean piracy. If you think woman pirates should be all sassy, sexy and tough, check out her story.

Born around 1700 in Ireland, Bonny's family soon moved to South Carolina to start a plantation. By the time she was 13, she had stabbed a serving girl, eloped with a small-time pirate and set fire to her father's plantation. Not a bad start.

While enjoying the pirating life, Anne became disgusted with her husband's small-time career and cowardice, and became mistress of the infamous Jack Rakham. She fought alongside the men in every battle, stopping only to have a baby in Cuba (nobody knows what happened to it) and sailing off again for more plunder and adventure on the high seas.

She also took a fancy to another handsome shipmate, who turned out to be another woman in disguise! This woman was Mary Read, who had to quickly reveal herself to a jealous Rakham or have her throat slit. Together, both women fought as tough, or tougher, than the men they rampaged with. In an age where women were definitely not allowed on pirate ships, they were well respected by all their shipmates and only dressed in men's clothes during battle (kind of difficult to fight in a full-length dress.)

Really, why doesn't Hollywood doesn't make movies like this? 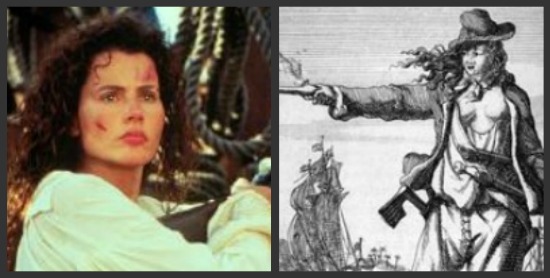 Captain Barbossa, mutinous first mate and main antagonist of Jack Sparrow in Pirates of the Caribbean, is revealed to be under an Aztec curse, rendering him and his shipmates undead. In the final battle, Jack Sparrow kills him. However, he is resurrected at the end of the second film, and plays a large role in the third, where he and Sparrow are forced into a tenuous alliance, (at one point, each agrees to captain one half of their ship.)

Barbossa is certainly a nod to Hayreddin Barbarossa, a 16th century Turkish merchant turned pirate. The question is, which character is more grand? Well, let's see – Barbossa had the Black Pearl and a "skeleton crew" and was defeated by Jack Sparrow, a pirate with a penchant for eyeliner and Keith Richards' drunken swagger.

In contrast, Barbarossa was the scourge of 16th century Europe, sacking ships and towns in Italy and Spain. He was such a terror that the combined military might of southern Europe had to band together to defeat him – or tried to. The subsequent naval battle in 1538 went so horribly for Christian Europe that Barbarossa didn't lose a single ship, and he and the Turks became undisputed masters of the Mediterranean for the next 30 years.

While other pirates had to move from town to town to stay one step ahead of the authorities, Barbarossa decided to do something a bit more grandiose - he formed his own country! Defeating the Spanish in Algiers, he set up a territory under the protection of the Ottoman Empire, and over the next 300 years it became the de facto base of Meditteranean piracy. 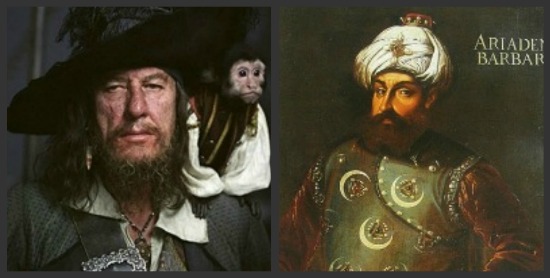 You wouldn't think we'd leave Johnny Depp's character off this list, did you? Disney's Pirates of the Caribbean characters have become iconic and the franchise has looted nearly $4 billion for Hollywood, all thanks to Jack Sparrow, a cunning, tricky pirate with a perpetual drunken catwalk, a cross between Keith Richards and Pepe le Pew. Though he is extremely skilled at swordplay, he prefers wit and negotiation over force.

His character was the most popular Halloween costume of 2006, and is still in the top ten every season. Children love to dress as him at kids birthday parties. With dreadlocks, black eyeliner, a penchant for rum and escaping death, he symbolizes the carefree life of freedom, adventure and loot that most of us can only dream of.

While Sparrow is the culmination of every historical pirate, he shares his dreadlocks with Blackbeard (Edward Teach), a fearsome English pirate who operated from 1717 – 1718. Sailing the massive Queen Anne's Revenge, a stolen French frigate (who had themselves captured it from the English), he blasted his way across the north Atlantic and the Caribbean for nearly two years. It was not his actions that so terrified civilians and shipmates, however – it was his black beard, tied in pigtails. He often lit fuses under his hat and beard, and this fearsome image of a smoking, bearded demon often caused his enemies to surrender without force. With knee-length boots, a wide hat and red velvet coat, he definitely strikes the impressive and Romantic image of a gentleman pirate.

Similar to Sparrow, Blackbeard preferred cunning, blackmail and terror over actual force, and as an "honorable" pirate (usually), there are no reports that he ever killed his captives, and always kept his end of the bargain when negotiating ransom. He also respected his crew, honoring the "brethren code" and making sure everybody got a vote and their fair share of booty. 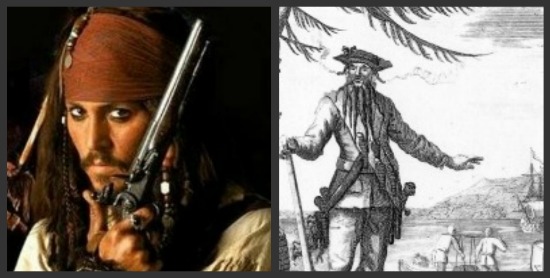 This post was written by Chris Molnar. If this has inspired you to dress as one of these pirates for Halloween, be sure to browse our selection of pirate costumes!
Tags: history, movie, pictures, pirates