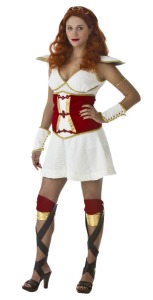 MINNEAPOLIS, September 7, 2011 – The Guild and HalloweenCostumes.com are proud to announce the debut of an officially licensed Codex Halloween costume. View the Codex costume. The costume is based on the red and white corseted dress worn by Felicia Day as Codex in The Guild’s 2009 music video “(Do You Wanna Date My) Avatar.” The Guild’s Codex costume will be available for purchase at HalloweenCostumes.com.

Codex has become a favorite of many, and The Guild cast and crew frequently encounter Codex look-alikes and cosplayers at conventions and other events. In fact, costumes and cosplay are so much part of the culture that season five of The Guild is set at a convention not unlike Comic-Con. “I’ve always thought of Codex as a superhero for gamer girls and women,” says Day. “She’s smart, sexy, and confident. To be able to offer access to her costume on a wider basis is a real dream come true!”

More information on The Guild Codex Halloween costume is available on the HalloweenCostumes.com website. The costume will arrive in early October, in time for Halloween 2011. There is an option to sign up for immediate email notification when it becomes available for purchase.

HalloweenCostumes.com has an exclusive license with The Guild and plans to offer more costumes and accessories from the popular web series in the future.  Both parties are excited to launch the line this Halloween with the Codex costume. After all, what can be more fun than dressing up as everyone’s favorite avatar?


About The Guild:
The Guild is an award-winning independent comedy web series about a group of online gamers created by and starring Felicia Day, now with over 100 million views. The show, now in its fifth season, is available for free on Microsoft’s Xbox LIVE, MSN, Zune.net and The Guild website. Launched in 2007 and funded initially by the show’s fans, The Guild has since been sponsored by Microsoft and Sprint. Previous seasons of the show are also available on YouTube, DVD, iTunes, Netflix and Hulu.

Check out the "(Do You Wanna Date My) Avatar" music video