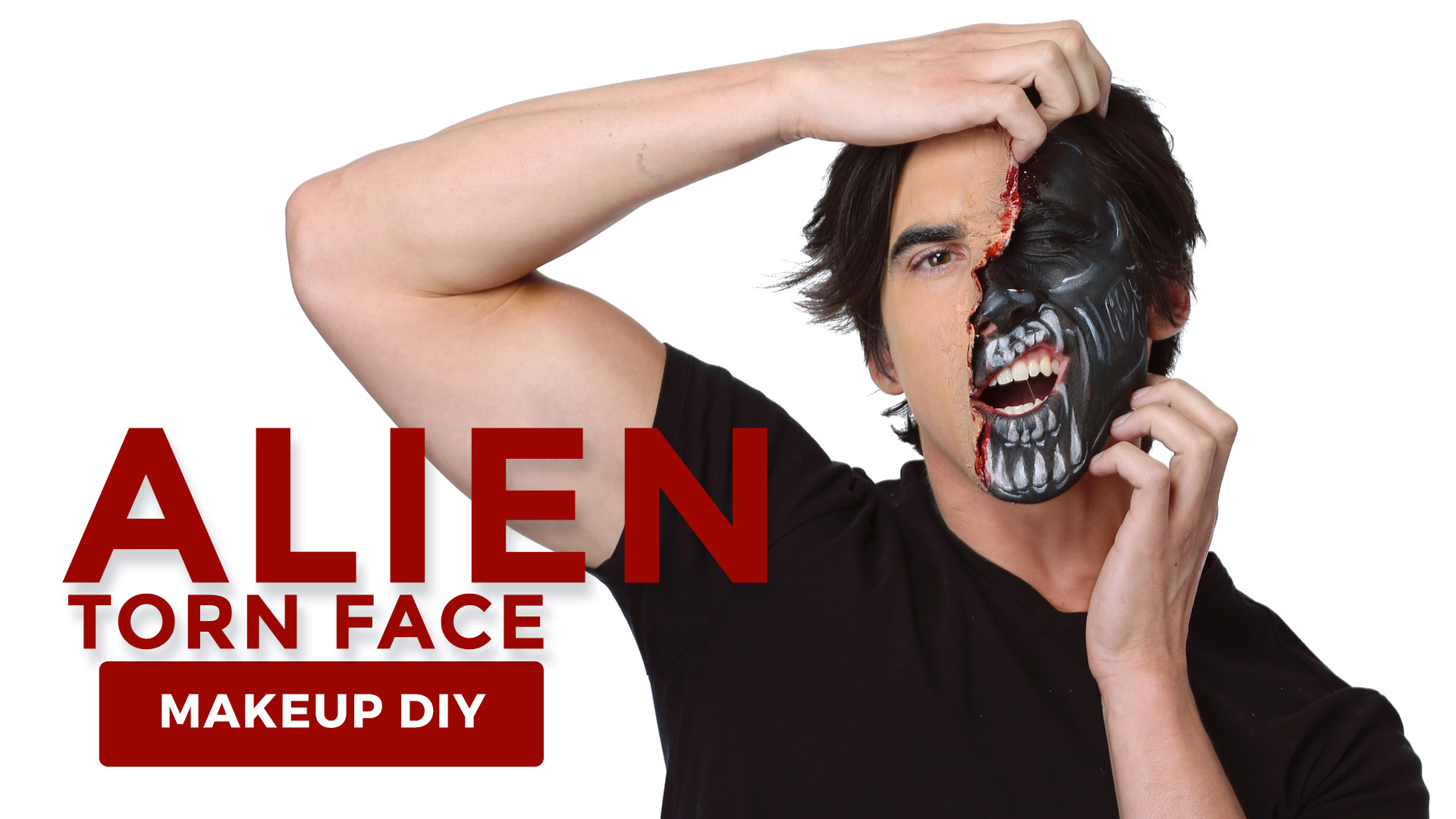 Anyone who has seen Ridley Scott's 1979 classic Alien is well aware of the famous Chestbuster scene in which an alien life form literally explodes through the chest of officer Kane. The scene is one of the more shocking scenes in the film franchise, not to mention one of the most memorable in the sci-fi genre. While the alien in the scene has such an iconic look to it, it may not be the easiest thing to do in regards to a Halloween costume. The Chestbuster alien costume would require the use of a prop, a feature some people may not want to commit to for a Halloween costume. Besides, if you're going to dress up as a creature from the Alien franchise, you're most likely to wear some form of Xenomorph costume. Since those can also be bulky, we've tried out some different makeup effects to get a more practical form of the perfect organism.

Our tear-away face alien makeup tutorial below provides some tips for creating a cool Xenomorph look while using the element of the alien bursting from the human. Learn how to create key facial features of the aliens as well as a scary bloody effect that you can use for other costumes as well in this Alien face makeup tutorial.

In space, no one can hear you scream...especially when your face is getting torn off.

Now, we are going to sketch out the parts of the face where we are going to have the four rows of teeth, not two rows but four, because this is alien. My pencil broke, so I had to go get someone to get me a sharpener. So, in the meantime, since the liquid latex had dried, I an putting foundation over top so it looks like his regular skin. Make sure that you blend in the foundation with both the face and your neck, so that way it doesn't look uneven. Now, I'm going to go back with that eyeliner pencil. You can use any kind of color. I just prefer black since we are using mostly black face paint for this.

Now, I'm going over the layer of liquid foundation with a powder to make sure that it sets. Now, what we're going to do is we're going to peel back some of that liquid latex so that it looks like it is peeling off of the skin. Make sure that you are very careful with this, and don't rip the liquid latex, because it is very easy to do that. This is just to give the effect that your skin is peeling off of the alien that is coming out from underneath.

And now, what I'm doing is I'm going back in the places that I highlighted with white, and I'm patting it down so that way it blends in with the black. And then, going back with another white line over your grayish line to give it some of that highlight. We're going to use white in the small part of where his open jaw is, so that we can see...they aren't teeth, but they are somewhat veiny between those parts, so you want to make sure that you really get those pieces.

I tried to see if a black and red would look good underneath this, but I know that Alien just has a straight-up black mouth, so just go in with black water paints. Now, we're going to clean up the teeth. It's okay if you got a little messed up the first time, because now we're going over it with a small detail brush, and cleaning up those spots where the teeth had gotten messed up. Then, you're going to go back with the white, and define more of the teeth if need be, and put in some more highlight over top of the teeth, so that way, people know that they are there.

Now, we're going to go into the jawline, and make sure that people can see the definition between the jawline of both sets of teeth, and the shell up over top. Now, I'm going in with some black eyeshadow, and I'm going to just smudge a little bit over the teeth to make them look aged. Then, I'm going in with a brown eyeshadow to make more of the definition within. Also, you can use it on the teeth to make them look a little bit more aged.

Now, I'm going over the liquid latex layer that is between the alien, and using red shadow and black shadow to really mess it up. And now, I'm going in with some scab blood, and liquid blood to make it as if the liquid latex is coming off of the alien. And then, after adding a few finishing touches with some black eyeliner, and now you're all set. 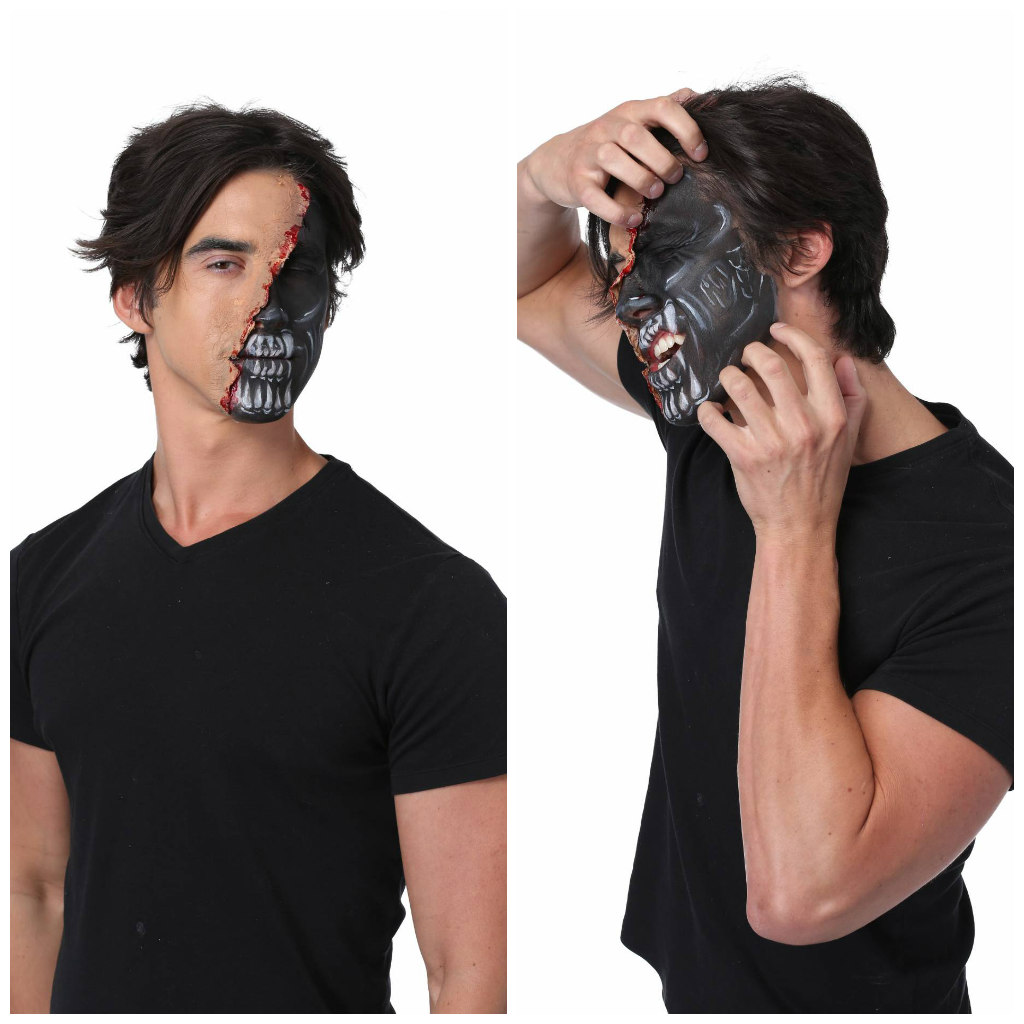 All you need to achieve this terrifying look is a special effects makeup kit. This makeup tutorial is scary enough on it's own that you can wear something as simple as jeans and a hoodie with it. However, if you want to add a costume to go with your makeup, the possibilities are endless. You can embellish the alien with a more monster-type costume and accessories. You could maybe swap the black paint in the tutorial for a greenish color and create a solid zombie costume.

What do you think of this version of Alien makeup? Do you plan on putting together a sweet Xenomorph costume? Maybe you'd want to use the torn face effect for something else, like a terrestrial horror-themed costume. If you'd like to stick to Alien costumes for Halloween, keep in mind that the Xenomorph queen can get to around 14 feet tall, but you can consult this handy alien height chart if you'd like to dress as something closer to your own height.