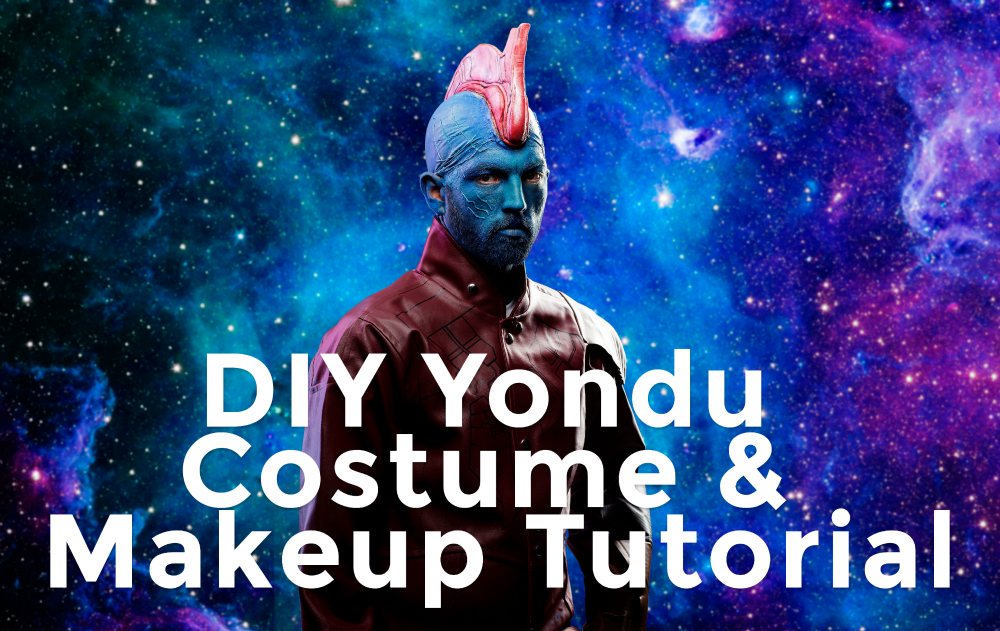 This year, Guardians of the Galaxy Vol. 2 hit theaters and did not disappoint. The follow up to the surprise summer hit of 2014 was an action-packed visual spectacle with even more of the fun character dynamics that were introduced in the first one. Every character had their chance to shine with some hilarious dialogue exchanges. Whether it was Rocket calling Star Lord “Star Munch”, Drax’s poor attempts at sympathy, or Baby Groot being...well...Baby Groot, the movie provided plenty of great quotes.

One of the most memorable quotes came towards the end of the film when Yondu and Star Lord (Peter Quill) had escaped their exploding ship and were floating down to safety together. Yondu was holding onto his arrow like an umbrella handle which prompted this exchange:

It didn’t take long after that before the internet was obsessed. All of sudden, people had made memes, custom toys, and cosplays of the blue-faced Yondu in a Mary Poppins costume. Even Michael Rooker, the actor who plays Yondu, posting to his instagram about it when he met with a Mary Poppins impersonator at Disneyland. If you’d want to achieve the Yondu Mary Poppins look, we’ve put together a handy DIY costume and makeup tutorial for you below!

The video above explains everything you need to do to get the makeup right. It's fairly easy, but keep in mind that there's more to it than just blue facepaint and a bald cap.

With your liquid latex, you're going to put a little bit on the sponge. You start to dab along the line, and make sure that the bald cap is on properly. Now we got to let that sit, let it dry.

Alright, so now what we're going to do is we're going to completely take away your eyebrows. So you want to make sure that you push up from the eyebrows, and start to push them up against the face, so that way the glue gets in between each of the hairs.

Alright, now you're going to put powder where you have the latex and your eyebrows. So yes, because his eyebrows are so thick, I have to put so much glue on his eyebrows. So while that's drying, we're going to start putting down wax, putting it right where the piece is going to go. Roll it up a little bit, and then put it along the lining of where the headpiece is going to go, because it has to look like it's coming out of his skin. And, sometimes you're really going to have to roll it around to make sure that it's not too firm, so that way you can just put it right on there. And then, start smoothing out the sides so that way it blends in.

We're going to put spirit gum along where we're going to put his headpiece. I'm going to make sure that it's set and then go back along the lining with black shadow to add more of a contour to it. We're done!

Once you're all set with the makeup, you’re going to want to pull together your look with a costume. You can use Star Lord’s ravager jacket if you’re looking to go as basic Yondu. However, if you want the full Mary Poppins experience, you’re going to need the nanny costume to match. 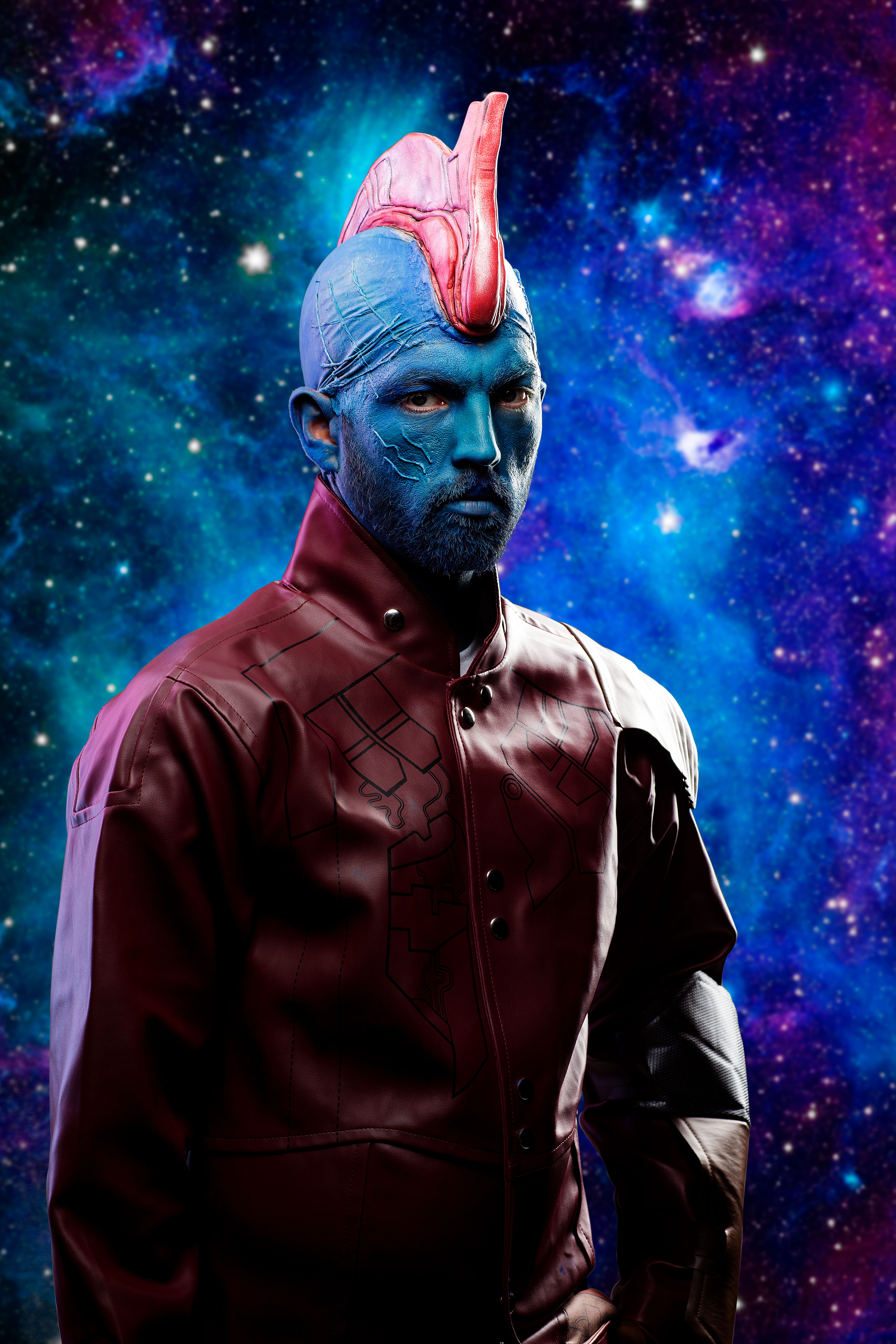 "You can fool yourself and everyone else, but you can't fool me." 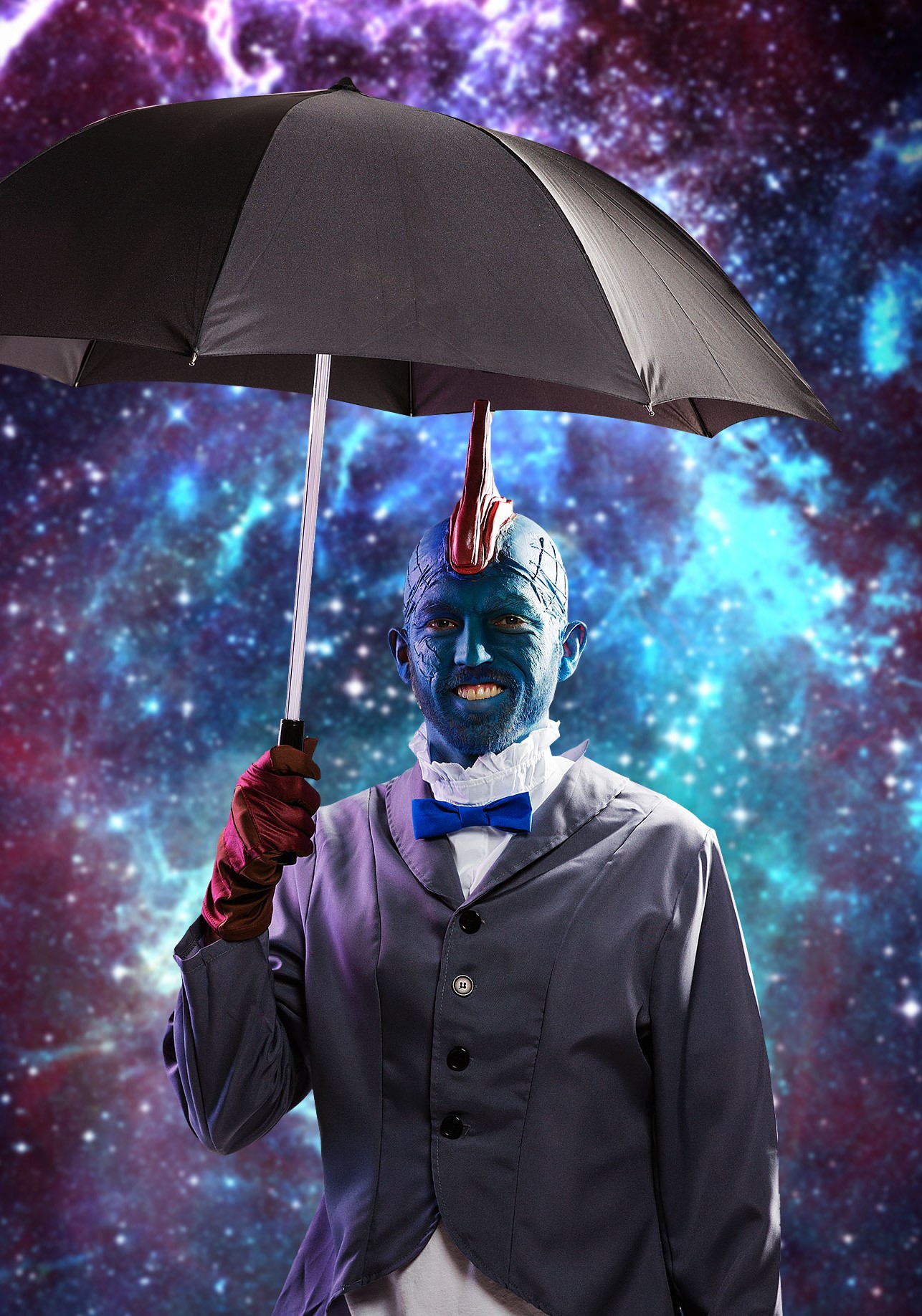 What do you think? Is Yondu the look for you? If so, are you going to wear the ravager jacket or go full Mary Poppins? It's fun to wear a costume with an inside joke from a movie. The best part about this one is that Michael Rooker, the actor who plays Yondu, has embraced the joke as he's made several references on social media and has gone as far as to pose with Mary herself at Disneyland! If you're looking for other Guardians for a group costume, why not check out our full selection of superhero costumes to see what other fun ideas you could come up with.