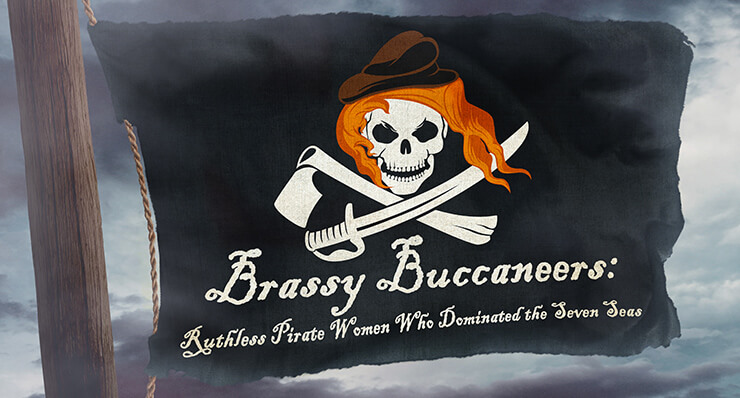 Throughout history, many famous pirates have sailed throughout the world. A lot of notable pirates such as Sir Francis Drake and Blackbeard, among others, were male, but there were plenty of women pirates who were just as ruthless. Even like their male counterparts, there are some pirate women who have only existed throughout the hundreds of stories in pirate lore. The reason why there are so many interesting stories about pirates is because there's very little historic documentation of them, especially with female pirates. In most of history, women were not supposed to be pirates. One of many superstitions of the seas was that it was bad luck to have a woman aboard your ship. To keep their identity concealed, some would dress and live as men during their time on the water.

Despite the perceived negativity around women on the ships, it didn't stop them from taking command and committing acts of piracy at times. We've tracked down more than 30 pirate women, both real or potentially fictional, and included them in the following resources. These pirates come from various points in history dating all the way back more than a couple hundred years BC all the way to late 20th century. Below, we've featured ten of the most prominent women in piracy with information such as territories, years active, and more. Some of them, such as Anne Bonny, have shown up in video games, TV shows, and other forms of pop culture. Check out this infographic for your complete guide to these fierce females.

Faked her own death and went into hiding dressed as a man to evade the government. Several years later, she returned to piracy. Died in a shootout defending the small Caribbean Island she had taken over.

Aliases: Back From the Dead Red

Fought in the was of the Spanish Succession while with the British Army. Became close with Anne Bonny after joining Calico Jack's crew. Was captured with the rest of the William Crew and sentenced to death by hanging. She eventually died in prison from a fever in 1721.

Abandoned her husband to join her love, John "Calico Jack" Rackham, and assisted in commanding his ship, The William. Dressed as a man while pillaging other ships. After the crew was captured, Bonny was the only member to be released following trial. Everyone else was hanged.

Earned the nickname Sadie the Goat due to her temperament and habit of headbutting victims. Her crew would raid small villages and farmhouses along The Hudson and Harlem rivers. Her ear was once bitten off in a fight and, after getting it back, she wore it on a necklace.

Thought to be the first American female pirate. During rough weather periods, her crew would disguise one of their ships to appear broken down and Wall would act distressed. When other ships came to inspect or help her out, the crew would then ambush and rob them. Was tried and sentenced to death by hanging in 1789. Was also the last woman to be hanged in the state of Massachusetts.

Supposedly bribed officials to overlook her privacy and illegal activities and to evade her death sentence after she was caught. Was often confused with he mother-in-law, Elizabeth Trewinnard, and hence sometimes was referred to as Elizabeth Killigrew.

Took over the Ardiaean Kingdom following the death of her husband, King Agron. Provoked war with Rome because of piratical raids ordered on neighboring territories.

Former Chinese sex worker who married a pirate and rose to prominence after his death, taking command of the infamous Red Flag Fleet. At its height, her fleet consisted of more than 1500 ships and 80000 sailors. Considered to be the most successful female pirate and one of the world's most powerful pirates in history.

In Popular Culture: Pirates of the Caribbean: On Stranger Tides (film)

Took command of 64 ships after her husband died in 1921. Her fleet would attack villages and fishing fleets around Beihai, taking young women as prisoners and selling them into slavery.

Aside from the ten pirates listed above, there are many other important women who have left their mark in pirate history. Some were real, but some are said to be made up. Check out the ledger below for information on several other notable women pirates.

A Pirate's Ledger: Other Notable Women of the Seas Transcript

There are other Female Pirates mentioned throughout history. With the lack of documentation and historical records, it's difficult to know whether or not some of these women even existed. Here are a few others mentioned in pirate lore. (*Denotes existence is disputed)

Fought her brother for the thrones of Denmark and Norway

Sister of Rusila; became a pirate to avoid marriage

Viking Pirate who fueded with her brother.

Three potentially fictitious "Women-warriors" connected to the Battle of Bravelier.

Had a fleet of longships with crews of young female pirates that raided along the coasts of the Baltic Sea.

Seen as inspiration for Hermintrude in Shakspeare's Hamlet

*Aethelflaed (Alias: The Lady of the Mercians)

Following her husband's death, she took command of his fleet in order to protect her land from the Danish Vikings

Jeanne of Clisson (Alias: The Lioness of Brittany)

Led open warfare, along with her children, against the German merchant class of Bergen by means of piracy.

Became queen of Tetouan following the death of her husband in 1515. After turning to piracy, she was notorious for being the one who would negotiate the release of Portuguese and Spanish captives. Was eventually overthrown by her son-in-law in 1542, after which her fate went unknown.

Participated in secret piracy started by her brother and spouse in The Baltic Sea.

Was regarded as a mascot and symbol for god luck in accompanying pirate Laurens De Graaf on his ship during acts of piracy. Did not hide her gender like most other female pirates.

Practiced piracy with husband Eric Cobham in the Gulf of St. Lawrence from their base in Newfoundland

Convected of piracy in 1726, but was eventually released.

Convicted of piracy and hanged in 1729.

Information: Took up piracy in 1741. Captain of a group known as The Burn Rose Pirates.

Only exists through potentially fictional stories about her life.

Margaret and her husband, Edward Jordan, went to trial for piracy in the early 19th Century. Many accounts say that both were hanged, but the court report states only Edward was sentenced to death while Margeret was acquitted.

Sweden's last pirate; arrested with other crew in 1828; eventually disappeared.

Often mistakenly reported as real because her story was reported in a local newspaper as an April Fool's Joke.

Known by name only. No English stories or other sources documenting their lives seem to exist.

Who is your favorite woman pirate? We really like Sadie the Goat. The idea of wearing your severed ear as part of a necklace has a special level of toughness to it. We hope this map and infographics have armed you with useful knowledge or helped increase your interest in pirates. We'd recommend some of the resources listed below if you'd like to study up on pirate history. If you'd like more pirate entertainment, why not check out a show like Black Sails or maybe watch some pirate movies. There's even a new Pirates of the Caribbean movie here in time for summer movie season. If not anything else, be sure to dress up in Pirate costumes for International Talk Like a Pirate Day this year! Yarr!