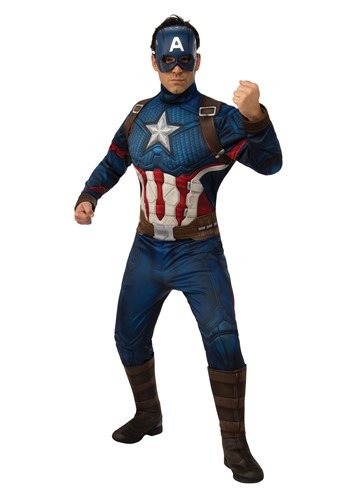 You Can Do this All Day

Captain America just never gives up. Even when the odds are stacked against him, he still puts up a good fight! Rude thugs at the movie, old buddies-turned baddies, and even A-class supervillains—he'll keep fighting until the good guys win the war. That's why we love Cap! Well, that and we love the rad outfit he's been rocking these last 10 years.

He's had many variations of the classic Captain America costume, from his humble beginnings in The First Avenger, to his iconic look in the first Avengers movie, and even his stealth suit in Captain America: The Winter Soldier. Finally, his look from Avengers: Endgame brings us back to a classic look that's ready to tussle with the universe's greatest villain. Now, you can get Cap's look when you wear this officially licensed costume.

This Avengers: Endgame Captain America Costume is a deluxe outfit based on Cap's uniform in the film. It comes with a jumpsuit that has printed details, like the silver star on the chest and the iconic stripes in front, to give it the look of armor. It also has faux straps around the shoulders and waist to give the suit a battle-ready appearance. It also features attached boot covers, which let you wear your favorite pair of shoes with the costume while maintaining true superhero style. Finally, the mask fits with an elastic band and finishes the outfit to get you geared up for a fight with Thanos.

Captain America proves that all you need to be a superhero is a determined attitude and a heroic costume (and maybe some Super Soldier Serum). We can help you get outfitted in the costume if you can bring the attitude to the table. Who knows? Maybe you have what it takes to defeat Thanos once and for all!