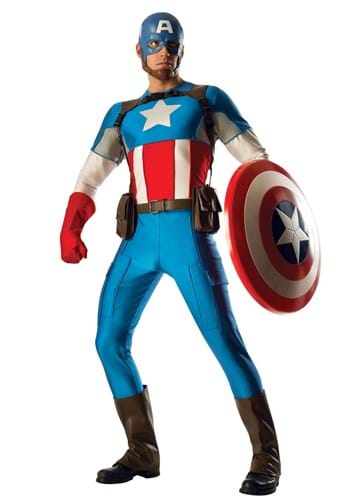 You Can Do this All Day

Steve Rogers has come a long way. Back in World War II, he did battle against Red Skull and the forces of evil. Then, after a short hiatus stuck inside of an ice cube, he came back to thwart the plans of vicious villains like Loki. He exchanged blows with Ultron. He even led the charge against Thanos and his army of creepy looking aliens. If anyone deserves a nice, peaceful retirement, it's him. Someone needs to step into the role of Captain America, so Steve can enjoy his time off. Someone who has courage! Someone willing to stand up for what's right! Most importantly, someone who looks really great wearing this Captain America Grand Heritage Costume. We think that someone might be you.

This Captain America costume is the real deal. The jumpsuit comes in the bright reds, the blazing blues, and clean whites of his traditional outfit from the comics. It's made out of a spandex blend fabric, so it stretches for a form fit. It fits with a zipper in back and even has functional pockets on the thighs. The appliqued stars and stripes add a patriotic style to the look that would make Captain Rogers proud! The belt and harness are both made out of faux leather material and even come with satchels that slide on the belt. The gloves add a pop of red and also look great when you're striking heroic poses at the next cosplay event! The boot covers fit over any pair of shoes and the vinyl mask has a realistic look that almost looks like it came straight out a movie from the MCU. Finally, this costume comes with a 24" shield that straps to the back of the harness. Put it all together and you'll have the look of a tried and true hero!

You'll be able to follow in the footsteps of Steve Rogers and Sam Wilson when you slip into this iconic outfit! Just make sure you grab a team, so you can become the stalwart defender of a new era of Avengers!