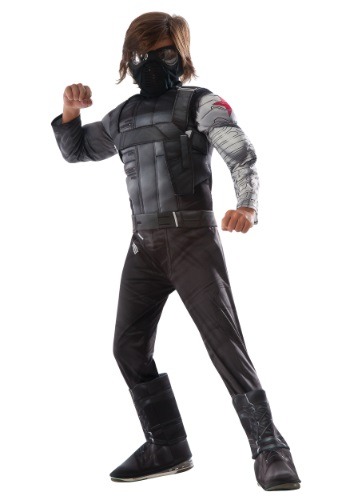 Captain America's best pal, Bucky Barnes, has worked hard to shake off any remaining compulsive brainwashing latent in his brain after the many years and manipulative work performed by HYDRA. Thanks to all of that, they’ve turned especially hostile and now turn fingers towards him for a series of crimes that, despite appearance, weren’t his fault! Well, what do you think happens when you train an assassin and then make him mad? Well, he's none too happy about it and he's ready to take the mantle of Winter Soldier to clear his name, with a little help from Cap, that is.

Of course, your kid might not have the crazy history of Bucky, but that doesn't mean that he has to miss out on the action! This Civil War Winter Soldier costume transforms your child into the superhero from the movie. The deluxe costume comes with a polyester jumpsuit that has muscle padding in the chest and arms. The left arm has a metallic look with a red star on the shoulder to recreate his robotic arm. The included mask helps your child hide his secret identity as he battles against the forces of evil, and it also makes him look like a super-tough comic book character as an added bonus.

Once your child has it on, he'll be ready to kick some serious butt. Of course, he's going to need a good partner to help him clear his name and we'd like to point out that we have some pretty sweet Cap costumes from Captain America: Civil War in adult sizes. You could pair up with your little guy and take on the bad guys together!