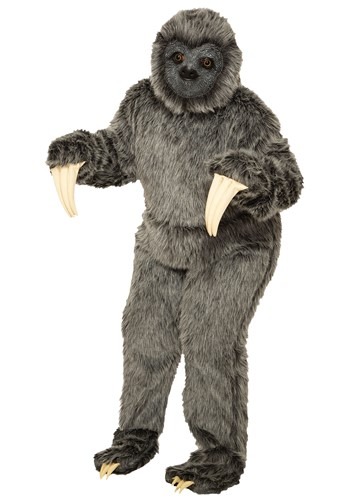 Captain Garbok the Languid lumbered across the deck of Mossy Rock, swinging their massive clawed arms. The crew was preparing for departure, loafing about as their captain growled commands. Their course was set for the Antilles, where it was rumored there was land in need of inhabitants.

Garbok paused at the ship’s wheel, tapping his long claws against the wood as they watched the crew finish preparations. It was nearly time. Garbok turned to face the shore and stared out at the trees that had offered food and shade between trips across the sea. They scratched their long, shaggy coat, and turned back to the crew. Garbok bellowed and the crew turned their beady eyes to their captain; the final sailing of the Mossy Rock would take Garbok and their giant sloth crew home to the Caribbean.

Okay, so giant sloths didn’t use a ship to get across the Caribbean, but wouldn’t that be a tale to tell? You could tell it… you could even reenact, it in stunning detail, with this Sloth Mascot Costume. Pull on the faux fur jumpsuit and become the first giant sloth the world has seen in 10,000 years. Under the lifelike pullover mask, you can look out with the same sleepy vision of Garbok himself. You may not be as big as the elephantine sloths that once swam oceans, but you will look as intimidating with their dark eyes and long claws.

In the tops of trees, what looks like a small moss-covered boulder rests at the base of a branch—a sleeping sloth turned green through time and a languid lifestyle. It appears, once safety was found, giant sloths had no reason to grow larger than small dogs. But from their mammoth proportions to the cuddly odd-balls that have earned our affections, sloths have a story worthy of embellishment. Share their legends with this Sloth Mascot Costume.