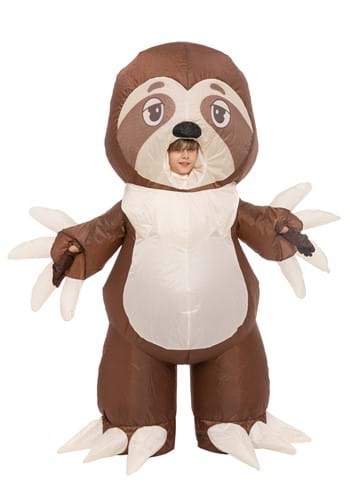 Sometimes, it feels like there is nothing on Earth that is slower than your kids getting ready in the morning. Embrace that slothlike speed by grabbing them this Inflatable Sloth Kid's Costume. Cut down on the slow dressing by getting them a costume that they literally stand in, you zip up, and then you hit the power button. Done and done! Now it's off to the races (well, theoretically, anyway.)

There's nothing easier than this inflatable kid's sloth costume. Zip it up and go! No small pieces, no random accessories to keep track of, and nothing that can hurt another kid (but those claws sure look epic!) Just four AA batteries (not included) and your kiddo is ready to hit the town as fast or as slow as they want. Hopefully they'll stay awake between houses--no telling how hard it would be to carry a kid in an inflatable back to the car.

There's Enough Candy to Go Around

Although the lure of candy might be enough to light a fire under your little sloth's behind. This inflatable will keep your kiddos warm (or cool, depending on where you live) and there's definitely no way you'll lose them in a crowd! This is a low effort, high reward costume. Just pick up four AA batteries, hit the "on" switch, and you're good to go. The kids can trick-or-treat at their own speed, while you do...whatever adults do while they wait for kids to finish collecting candy.