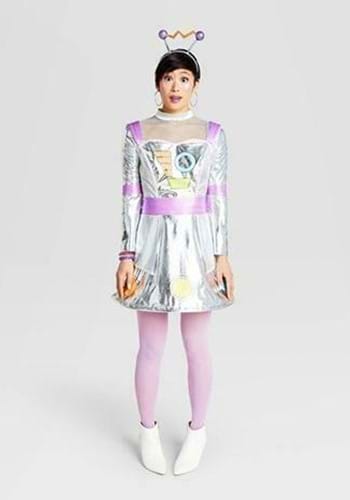 When you came to Earth, you fully expected to not understand any of what the people of that backwards planet do. The news reels on the galactic web usually paint humanity as the worst of the worst in a lot of ways, so you braced yourself for that before you came. But no one told you about the good parts!

First of all, they are absolutely obsessed with all things alien, going so far as to have entire fake landing sites and falsified videos of them. As an actual alien robot, that was pretty flattering. The real best thing, though, was definitely ice cream. How did no one else think of this? It does not compute. It is so good that you think you will never move back to Omicron Persei with its three suns and no ice cream!

Finding the best costume to fit in while sticking out can be tough, but this cute and quirky Adult Robot Dress Costume. Being the alien robot in the room can be a pretty good gig when you get to look this good. The silver and pink dress is both flattering and stylish, just like they expect in your home system, and the fabric has that Omicronian metallic sheen that you love. The robotic headband and built-in hoop give you that extra bit of robotic goodness that will make your circuits explode!

If you are looking for the perfect robot costume, then look no further! Being a robot has never looked this cute. Just make sure to practice your dance moves because we can guarantee that you will be asked to do the robot!