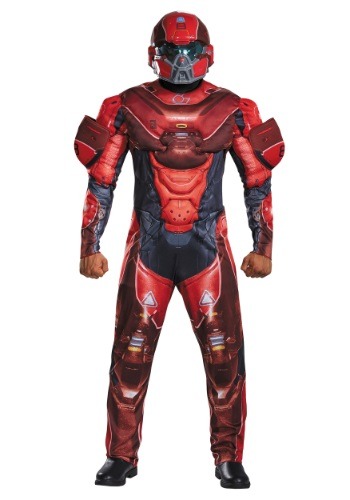 Are you ready to be the fearless leader of Red Team and command your soldiers in the battle against the Flood-infected armies and the remaining forces of the Covenant? Or maybe today's a nice light day of training and you just get to lead your team in a battle simulation against Blue Team. Either way, you'll want to make sure you're fully prepared to direct your fellow Spartan Soldiers to victory.

First things first, you'll need to look like a Commander that no one would even think to second guess. So grab this Red Spartan Muscle Chest Costume and you'll be good to go. None of your soldiers would question your commands. You'll look as muscle-bound as one of the few super soldiers who survived Reach's biological augmentation procedures and saved the world during the Human-Covenant War. With this Mjolnir Armor Costume, you'll almost feel as if your strength, speed, agility, and reflexes are all amplified to the fullest! But don't be fooled by how realistic this costume looks, sadly we still don't have the technology to fit the type of artificial intelligence normally used in a starship into a battle ready suit of armor yet... Instead, we can just fit the entirety of the internet into our front pockets, but the latest cell phones won't help us out in case of an alien invasion. Maybe it's time to reprioritize the advancements of technology we'd like to see. Once everyone sees how amazing one could look in a Spartan's Mjolnir Armor, there will be no doubt in the direction earth's scientists and engineers should be aiming their work towards.

So help lead Red Team to victory in some epic live action role play or take the party by storm this Halloween and show everyone just how fashionable a Commander in the UNSC can be. Whether you shift the direction of a battle or the direction of technological advancements, you can be sure that you'll look good in this Red Spartan Costume.