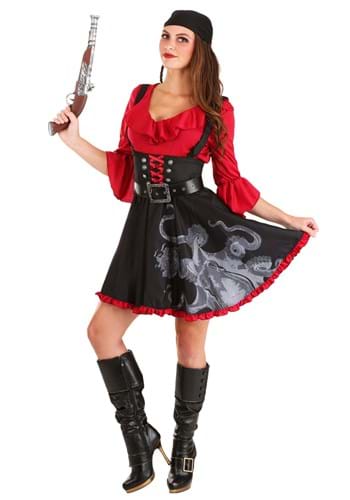 If you have dreams of skullduggery, then you need a symbol. Every great pirate claims a symbol of their own. Blackbeard had a skeleton and plenty of pirates liked to use the Jolly Roger as their sigil. It needs to be something intimidating, something that strikes fear into the hearts of your enemies. Something more deadly than the classic skull and crossbones. Enter the Kraken.

The Kraken is one of the most feared creatures to ever roam the seas. It can crush any ship like a tin can and every sailor on the high seas fears the aquatic monster. If you take the Kraken as your pirate symbol, your enemies will be shaking in their boots when you attack! Our costume designers respect the Kraken. That's precisely why they designed it into this adult pirate costume!

The Pretty Private Costume comes with a dark red blouse with a ruffled neckline. The circular flounce sleeves will help you feel the cool ocean breeze as you set sail for adventure. The dress is black and features the printed design of the Kraken destroying a ship with it's crushing tentacles, which will serve as your new pirate symbol! Finally, the costume comes with a simple black headband to complete the look. Once you have it on, the scallywags of the high seas may just give you a new pirate nickname... we happen to like "Queen Kraken, the Scourge of Caribbean" as your new name!

This pirate costume might not actually give you any control over the real Kraken, but when you head out wearing this pirate costume, you'll be the most feared swashbuckler around. The costume combines a classic pirate style with the feared creature of the seas for a look that's both fashionable and fierce!