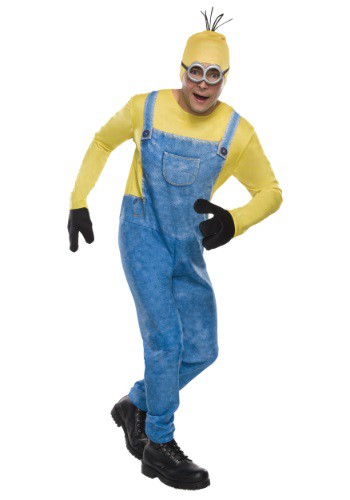 In the past, when someone called you a “minion” is wasn’t a compliment. It means, by definition, “an underling or servant of a very powerful person”. So, yeah, not a compliment. In fact, being called a minion was basically a straight-out insult. “Who you calling a minion?” you would shout back in anger. “Quiet, minion!” your tormenter would snap with condescension. Ugh. The worst.

But nowadays, if someone calls you a minion, your mind probably drift to...well...Kevin! And guess what? This Minion Kevin Costume gives you the unique opportunity to BE him, so as a minion you're going to have to make the important decision of which super villain to work for. Would you want to work for Scarlet Overkill? Gru? Think hard about it; Gru's got a heart of gold under his maniacal outer shell while Scarlet Overkill may just be a little more unhinged. It's up to you! Remember, you don’t take orders.

Because you, dear little minion, are not a servile underling. In fact, the amazing thing about dressing like a minion is that YOU become the powerful being, in control of everyone around you. Everyone will basically fall at your feet, in love with this faux-overalls jumpsuit and signature Kevin rubber goggles. Get ready to give a lot of three-fingered handshakes to your new adoring crowd in this officially licensed look!