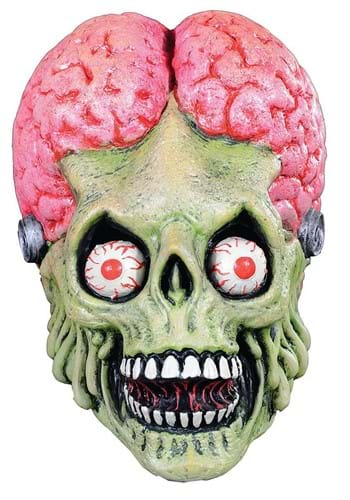 A Product of the 90s

The 90s were a wild time. They brought us grunge music, the weird troll dolls with the hair, and a strange resurgence of the yoyo. But, perhaps the most important thing that happened in the 1990s was a little movie called, Mars Attacks!

If you weren't there to see it in theater, you really missed out. Perfectly strange, hilarious, and full of alien antics, it was everything that the year 1996 needed... and now, you can relive the moments of that movie with this Mars Attacks! Drone Martian Mask!

This adult Martian Mask is a Trick or Treat Studios creation! That means it's a highly detailed piece, made by fans for fans. The mask is molded out of a latex material and captures all of the freaky details from the movie, including the bulging eyes, exposed brains, and scary jawline. It also has holes near the eyes for limited vision and ventilation holes for breathing. Just put it on and recreate all of your favorite scenes from the movie.