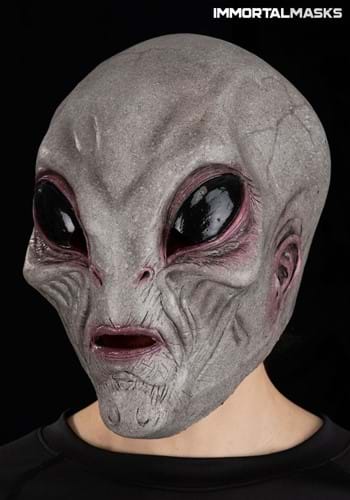 We all know the alien invasion is coming. It's only a matter of time. But when it arrives, you want to be prepared. We're not talking fruit baskets and polite greetings—though, you might like to have one or two planned and on standby just in case. We're not even talking barriers and armor to defend heart and home. When it comes to preparing for aliens, our best idea is blending in!

Since we're convinced aliens would have a pretty easy time detecting hurried face makeup, we've turned to our friends at Immortal Masks for this Alien Adult Mask! This exclusive mask is the most convincing alien disguise we've found yet and starts with an expertly molded latex form.

Next, the talented artists at Immortal Masks expertly paint the Halloween costume accessory to create its hyper-realistic appearance. A combination of greys, pinks, and black gives this particular alien its recognizable gray look and is sure to at least help avoid being mistaken for a human undercover!

Looking to win a Halloween costume contest? Dreaming up an out-of-this-world cosplay? Or maybe you're looking to convince the aliens you're one of their own. Whatever brought you to this Alien Adult Immortal Mask, it has you covered! Pair with gray body paint, a full-coverage bodysuit, or a futuristic alien costume to complete your extraterrestrial transformation!