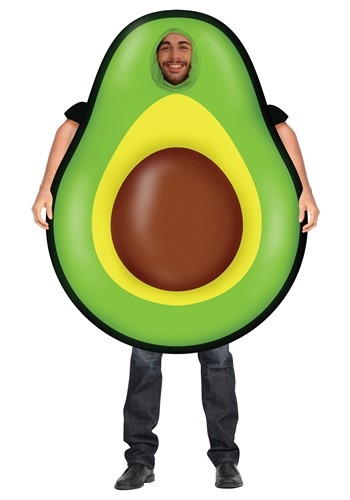 An Invitation to Brunch

You tried not to be suspicious when the brunch invite popped up on your Facebook page. People get invited to this kind of thing all the time, right? It would be nice to live like a normal person for once. You could picture it. A sunny breakfast nook. Laidback, witty conversation. Maybe there would even be a Mimosa or two. But as soon as you showed up to your supposed friend's door and saw their eager waiting face, you knew you had been fooled. There were no waffles waiting inside. No Pfannkuchen, no quiche. It was what you had feared. They were making avocado toast and they invited you for the main course. You ran as far and fast as your rotund body would let you. And as you rested, leaning against the bus rest three blocks away, you thought of that ever-true saying, "It's not easy, being green."

This inflatable costume is just as easy to throw on as it is to make some avocado toast! Simply put the AA batteries in the battery pack, attach the pack to your clothing, and turn on the fan and you're good to go! A fitted head hole and sleeves keep the air in while letting you move (and more importantly, eat) with relative ease. The bright green suit stands out from afar, making it easy for people to spot you as their favorite fruit!

It's easy to start up a conversation when you show up to any event as this controversial food. People either love avocado or they're wholly against it. Trade recipes and laughs at parades, parties, and even a performance or two and you'll find it's even easy to get the haters on your side. It's not often you can find a funny costume that's so tasty... er, tasteful!