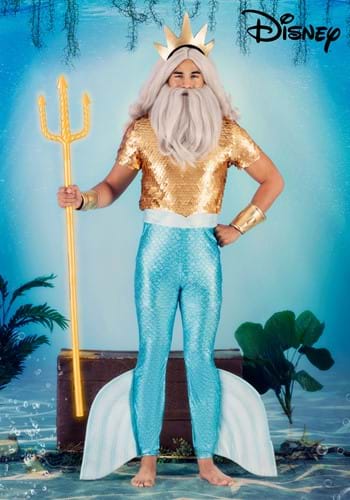 Leg in the Door

From the looks of things, being the king of the sea is great! But after a lifetime of preventing sea witches from destroying everything, stopping rather self-possessed daughters from running amok, and keeping fish and crustacean citizens happy with sing-alongs, we can imagine the charm runs thin.

So, it’s hard to blame Disney’s King Triton for sometimes coming off a bit grumpy. Luckily, Triton has magic! Magic that granted Ariel legs to explore outside their ocean world where the princess has a pretty neat castle King Triton could visit if the boredom gets to be too much.

Help Triton take a break with our Adult King Triton Costume from Disney’s The Little Mermaid! The exclusive ensemble brings Triton out of the water with its clever design. While retaining regal appearances, this Triton costume gives the character two legs to stand on instead of a tail with scale-printed leggings that feature attached fins.

Strolling through Ariel’s kingdom is easy; however, royalty or not, it’s best Triton wear more than would be necessary in the ocean.  A gold-sequined top, resembling armor, provides just that! Completing the costume are wrist gauntlets and a five-point crown nearly identical to the sea king’s own.