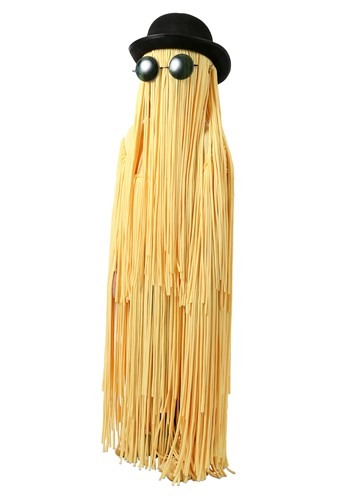 No one knows. After all this time,it's still a mystery. The original Addams Family ran for 64 episodes. Cousin Itt appeared in 19 of them and we never learned what was hiding under all of that long hair. We saw various feature films and now, with an animated film added to the Addams Family repertoire, you'd expect some light to be shed upon the mysterious Cousin Itt... and yet, we still have no idea what's under all of that hair! Perhaps your child can reveal the great mystery regarding the curious cousin! When they wear this Addams Family Cousin Itt Costume for kids, they'll be the one underneath all of that crazy fur!

Inspired by his many appearances in the Addams Family film, this Addams Family Cousin It Costume brings your child a look that will have everyone guessing about what's going on under all of that fur. The costume starts with a cape that fits around your child's shoulders. It's covered in long, stringy faux "fur" material. The hood comes with a matching layer of long, stringy faux fur. The sunglasses are simple, black circle lens glasses, which fit over your child's eyes to give an aura of mystery! Finally, to bring the whole look together, the costume comes with a black, derby-style hat! Once your child has it on, they'll start to understand a little bit more what it's like to be Cousin Itt!

The Secrets of Itt

Although no one, aside from maybe Gomez Addams, truly knows what's underneath all of that hair in the show, you'll know who's hiding beneath this officially licensed costume! Just be sure to check out our full selection of Addams Family costumes... that way you can get the whole family in on the Addams Family themed this year!