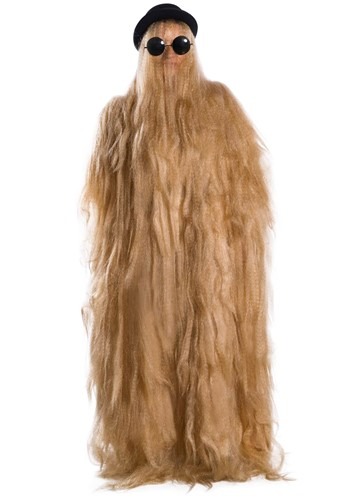 Cousin It has tried a few different professions throughout his time as a hairy monster. While his falsetto voice might have worked for a few operas he wasn’t destined to become a famous singer, much like being a zoo curator wasn’t going to work. Too many of the animals would have confused him with a toy. After all this time, it seems we may have found a role that will suit him perfectly though. Cousin It could try his hand at hair-modeling.

With flowing hair from head to (we’re assuming he has feet) toe, any hairstylist would have an incredible time taming Cousin It’s mane. Just think of the ringlet curls and hidden rainbow color jobs. With Cousin It working alongside the world’s premier stylists, bigger, better, and more exciting styling options would surely be invented. Can’t you imagine it? Eventually, the world would come to know Cousin It’s name as an ever-changing work of art. Before too long, we may even see everyday humans wearing their hair as long as the famous Addams.

Get in on the newest hair trend before anyone else with this Cousin It Costume. The bodysuit is covered in floor-length, sandy-blond synthetic-hair to give you that perfect shaggy look. Refining your Cousin It style is made easy with a black bowler hat. Trendsetting can be risky so block out the haters with a pair of chic, round sunglasses. Whether the world is ready for it or not this costume will have you prepared to make any upcoming hairstyle work.

Now that we’ve put the idea out in the world, we’re really hoping Cousin It will sign on and take up the task. We’re looking forward to seeing just how inventive hair fashion can get with such an epic head of hair at a stylist’s disposal. Then again, if he chooses to keep his hair all-natural, you could fill in for the charismatic hairball with this Cousin It Costume.